Coachella Party Preview: What Brands Have Planned for the Music Festival 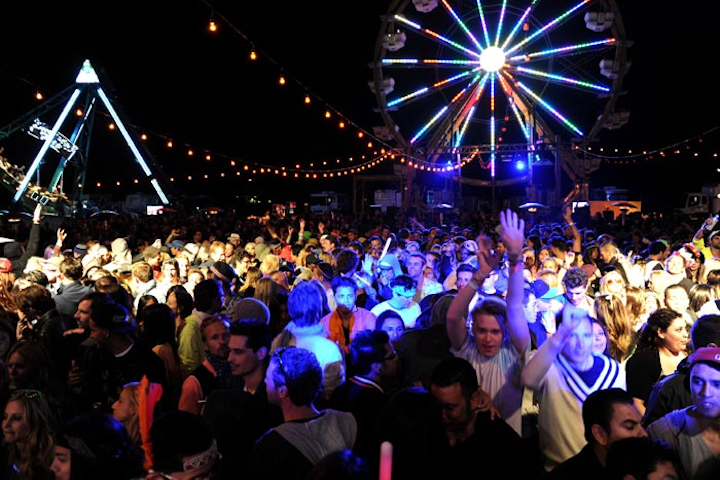 The buzzy Armani Exchange Neon Carnival will back back for the first Saturday night of the festival, drawing a crowd to an airplane hangar near the festival grounds.
Photo: Seth Browarnik/WorldRedEye.com

Continuing to defy all recession-related odds, the Coachella Valley Music and Arts Festival returns to the desert this year with a two-weekend takeover of the Southern California desert; tickets for the first, buzzier weekend sold out almost immediately. That's the weekend most brands pick, naturally, to set up their pool parties and events. And like the festival itself, this year's event landscape continues to evolve.

A couple of major newcomers this year include H&M and ShopBazaar.

For the fourth consecutive year, H&M is an official sponsor of the festival, but it's expanding its presence beyond the polo fields for the first time to the 40-acre Merv Griffin Estate, where more than 300 guests are expected for performances by Santigold, DJ Pesce, and others on Saturday. Decor will include Moroccan-inspired touches like pillows and rugs set against white poolside cabanas. Rafts will fill the pool, and paddle boats the pond. Meanwhile, on dry land, activities will include ping-pong and bocce ball.

For its part, Harper’s Bazaar's ShopBazaar will come to life in the form of a three-day shopping experience in the desert, similar to the pop-up created in December at Art Basel Miami Beach. Throughout the festival's first weekend, the event will take over the Jonathan Adler-designed Parker Palm Springs hotel. Former Elle event chief Caitlin Weiskopf is overseeing the event, having taken a post with the magazine earlier this month after a stint with her own business. Madison, ShopBazaar's Los Angeles-based retail partner, will showcase merchandise at the pop-up for quick incorporation of new purchases into festival wardrobes. The main event, a party with music by Mia Moretti, will go down on Friday, with additional events including manicures by London lacquers Saturday, and Herbal Essences' braid bar Saturday and Sunday.

Fashion brand Mulberry, on the other hand, will not be back on the scene this year.

As for the returning brands, Armani Exchange has built a reputation as the host of the weekend's most buzz-worthy party and plans to hold the fourth annual Armani Exchange Neon Carnival late Saturday night. If history is any indication, a massive throng will pack Tradition Aviation, an airplane hangar near the festival grounds; to ease the crush at the door, select guests this year can arrange to pick up their wristbands earlier, even off site in Los Angeles this week. The party will include thrill rides, carnival games, Svedka Vodka specialty cocktails, and music sets by popular DJs like Jus Ske. The night will also celebrate the debut of the special-edition Armani Exchange Color Flash watch and sunglasses collection in neon colors.

Also back for its fourth year is Lacoste, which brings its Lacoste Live Desert Pool Party to a private estate near the festival grounds. The event will include what's being billed as the world’s largest polo art installation, where guests will be invited to shoot paint-covered tennis balls at Lacoste's “Polo Gigante.” Table tennis and bocce ball also be on offer, and Fiji Water will cool guests down with snow cones and its new straws in water bottles. A pop-up shop will offer major discounts for partygoers.

Kicking things off early on Thursday, Filter magazine will return for its 11th annual Yacht Club pre-festival events, produced by lifestyle marketing and branding agency Filter Creative Group and presented by Aerie. (It will also offer a Thursday program ahead of the second weekend.) Details and Hennessy will once again join forces for Details at Midnight, a late-night Friday event. The Guess Hotel pool party will take to the Viceroy Palm Springs on Saturday and Sunday, and its after-dark event will draw a crowd on Saturday. Night Vision Entertainment and Chevrolet will present Volt Valley at the Mirage featuring Bagatelle Beach, a two-day event at a private ranch to celebrate this year’s festival. A Patrón-branded hot air balloon will offer chilled shots of XO Café, and bold guests can even hop on a zip line.

Desert Gold at Ace Hotel & Swim Club will host performance-centric events all weekend, and over at the Saguaro, Hello Stranger and dFm are teaming up with Dossier for the hotel’s second annual Desert Weekender events. The Hard Rock Hotel Music Lounge will take to the Hotel Zoso, which is set to become a Hard Rock property later this year. SBE is hopping into the fray as well with its Desert Sessions night event, presented by Greystone Manor on Friday, and corresponding day event, presented by XIV Sessions at Hyde Beach on Saturday; both events are at the Renaissance Esmerelda Resort.