Event Producers Give the Grammys 'A-'; They Liked the Set, But Not Nicki Minaj 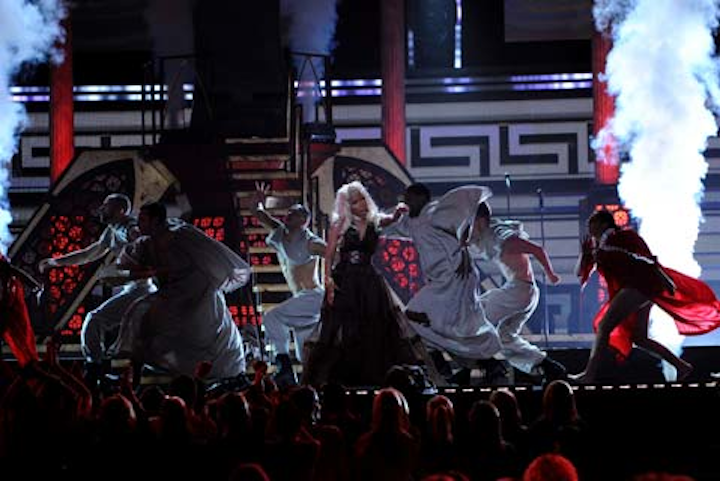 The country's biggest honors for music, the National Academy of Recording Arts and Sciences' 54th Grammy Awards, took place Sunday evening, bringing everyone from Bruno Mars and Lady Gaga to Gwyneth Paltrow and New York Giants players Mario Manningham and Victor Cruz to the Staples Center in Los Angeles. We asked some of the country's top event producers to weigh in on their favorite (and least favorite) details of the show. Here's what they said.

Javier Velarde
What I Liked: "The set design. It was clean, modern, high-tech, and worthy of 'music’s biggest night.' Throughout the night it changed colors, but never more than one color at a time, which goes to prove less is more. I also liked the lighting. Lighting designer Bob Dickinson is in a class of his own—is there anything he doesn’t do? The color palette. They used ‘black and gold’ throughout the night, the Grammy colors, which looked classy and sophisticated. Great branding and the golden amber lighting gave it warmth. There was great use of technology too. LED set, LED lighting, LED screens, LED stages, LED backdrops. LED has completely taken over."
What I Would Have Done Differently: "The opening act. Bruce Springsteen is a legend, but not relevant and not the right fit to open this show. So many other acts would’ve been more fitting, like Adele’s powerful comeback performance or Whitney Houston’s tribute by Jennifer Hudson. The outdoor stage had great production with the Foo Fighters and Deadmau5, but all under a raw tent? There's nothing worse than exposed tent beams and lighting trusses. It's a huge pet peeve of mine when people leave production elements go undressed."
Letter Grade: A- "Great show, but I leave the A+ for something breathtaking that I would watch over and over."
Velarde is the president and executive producer of Triton Productions in Miami, an event design, management and production firm that has worked with brands including HBO, American Express Centurion, Turner Broadcasting, Vogue, Warner Bros, Sony Pictures, Trump, and Lamborghini. Triton also produced the Latin Grammys red carpet the only year the show was staged in Miami.

J. B. Miller
"Overall the show was good and producing a broadcast of this scale as smoothly as this one is a huge achievement. The large audience, the huge number of awards and performances covering so many genres of music, and so many must-include portions, make the program overwhelming and long-running at times. The program did not provide enough opportunity to connect with the musicians and their stories on a personal level, and I feel they relied too much on big performances. I think the focus on live music performance draws attention away from what is being recognized—achievement in recording arts and sciences. And the Nicki Minaj performance was scarier than an actual satanic visitation."
What I Liked: "The David Guetta, Chris Brown, Foo Fighters, and Deadmau5 mash-up was spontaneous and fun, and you could clearly connect with the live  audience's energy. I also liked the use of technology, projection content, and the smaller venue with audience closer to the action. The show kept moving and the use of the multiple stages, towering LED walls, and massive lighting was technically impressive."
What I Would Have Done Differently: "I would have liked to see a couple fewer performances and more unscripted, authentic on-stage time by the winners and nominees. The Hee-Haw set used for Taylor Swift was probably a bad choice. It made the genre seem comical and took away from her great performance."
Letter Grade: B+
Miller, president and C.E.O. of event and entertainment production company Empire Entertainment in New York and Tokyo, executes hundreds of award shows and recognition programs, including the Webby Awards, Gotham Awards, and Time 100, as well as major music events such as the Keep a Child Alive Black Ball, Mary J. Blige Honors, and Will.i.am's Grammy Week benefit concert.

Fernando Varela
What I Liked: "The effective use of technology in conjunction with the staging and lighting. While the myriad of technical options can sometimes seem like overkill, this year's Grammy awards struck a perfect balance creating beautiful visuals while maintaining an efficient use of the stage real estate. The opening with Bruce Springsteen and Bruno Mars' performance were masterpieces—equally impressive from a musical and production standpoint, and overall execution."
What I Would Have Done Differently: "Cut Nicki Minaj's tasteless, unartistic, contrived attempt to create a controversial performance. Book a different host—LL Cool J lacked the energy and charisma to host an event of this magnitude."
Letter Grade: A
Varela is a producer for Mascioli Entertainment Corporation, an Orlando-based entertainment company offering artists management and booking for conventions, casinos, arenas, theaters, night clubs, fairs, festivals, and events.

Xan Guzik
What I Liked: "LL Cool J was a good host and I especially appreciated his comments about Whitney Houston. The overall flow was good, although it went late as usual. Many of the sets/staging for the artists were very colorful and exciting—there was great use of lighting and video—and a good variety of genres were represented in the performances. A few of the performances were lackluster or strange (Hello Nicki Minaj). I thoroughly enjoyed Bruno Mars, Katy Perry, Foo Fighters, and Taylor Swift, but Adele and Jennifer Hudson's tribute to Whitney were amazing."
What I Would Have Done Differently: "I know Bruce Springsteen is a legend, but his opening wasn't very exciting. A few less performances—it tends to drag. Certainly, we didn't need two Foo Fighters and Paul McCartney performances. Also, isn't this an award show—I recall only about eight awards being announced live. True, it's nice not to listen to a bunch of speeches, but it would be good to have a little more balance between the performances and the awards."
Letter Grade: B+
Guzik is producer and director of festivals at Jam Entertainment and Creative Services, a Chicago-based entertainment promotion and production company that has worked on music events like the Dave Matthews Band Caravan Chicago, Naperville Ribfest, California Mid-State Fair, and the National Association of Recording Merchandisers Annual Convention.

Kimberly Krouse
What I Liked: "Although it was a somber weekend given the fact we lost a legend, the show was upbeat and about the music, which Whitney would have wanted. They were still able to celebrate those who deserved to be celebrated and the show wasn't taken over by sadness. This is huge night for many artists and I am glad they still got to have their night. It was a very good mix of both. I also like having a host back after all these years. LL was a great choice. Jennifer Hudson did an amazing job in her tribute."
What I Would Have Done Differently: "I felt it was a bit all over the place. I know the show got thrown around due to the circumstances, but they had so much going on in this show. I didn't see a symmetry like the last shows I have seen."
Letter Grade: "A solid B."
Krouse is the owner and C.E.O. of Toast, a production company with offices in Los Angeles and New York. Toast works on roughly 30 to 50 events per year, working on projects like Rolling Stone and Us Weekly's "Rock the Oscars" party and In Touch Weekly's "Icons and Idols" MTV Video Music Awards after-party.

Paul Creighton
What I Liked: "LL Cool J as the M.C. He brings a great mixture of stage presence and energy. He's got charm and talent, but he is still able to turn from a well written prayer to 'Are you ready for music?' without seeming cheesy. The set was fantastic and the vintage marquee was a great touch. I also liked the Chris Brown bit—not for the song, but for the video mapping that they featured. This was the same technology that they used in the Super Bowl half-time show with Madonna. And Taylor Swift's number was fantastic—what a talent. Well produced, well staged, and well lit. My only complaint is that she used the 1940s-style microphone (I know it was a period piece), but it covered her beautiful face."
What I Would Have Done Differently: "They try to make things interesting on the show by doing unusual pairings, but they don't work as often as they should. Winning pairings included Bonnie Raitt and Alicia Keys doing their tribute to Etta James. You had two soulful singers sharing the same song. And the tribute to—and by—the Beach Boys was fun. But could Jason Aldean looked any more uncomfortable singing with Kelly Clarkson, and that was before his mic stopped working. Another questionable pairing was Rihanna and Coldplay. The order of songs was weird. Rihanna came out smoking with awesome dancers—a really big look. But I didn't understand her 'Make some noise for Whitney' comment. What does that mean? It seemed inappropriate."
Letter Grade: A-
Creighton is the executive vice president of T. Skorman Productions, an Orlando-based entertainment production company that works on more than 300 events a year, including corporate award ceremonies.

Tom Bussey
What I Liked: "The tent show with Foo Fighters and Deadmau5! It's the most exciting departure from what seems to be a formula for the staging of the Grammys. I also liked the set design for Bruno Mars—love the classic marquee and funk revival—and all the Adele buzz as it's great to see the recognition for talent and song-craft over one-hit pop tunes."
What I Would Have Done Differently: "The 'mosh pit.' If there is an audience around the presenters and performers, there should be mosh-worthy moments. It seemed out of place and forced. [It would have been nice if they] included Dolly Parton in the Whitney Houston tributes, although I thought 'I Will Always Love You' was beautifully performed by Jennifer Hudson."
Letter Grade: "A-. I was thinking B+ for the overall, but then a bunch of 'old' rockers rocked, closing the show with a pure musical moment that boosted it."
Bussey is the founder of Production Glue in New York, an event production and technical management agency that works on approximately 75 events annually. Projects include the outdoor summer concert series on Governors Island, the CW Upfront, and Nike's World Basketball Festival.