With the exception of first-time caterer Lucques and awards art director Keith Greco of Greco Decor (a newbie at only six years), the team behind the Screen Actors Guild Awards show and dinner has been at it for a decade or more. “Because we’ve worked as a team for so long, the event is seamless and smooth,” said awards event supervisor Andrea Wyn Schall of A Wynning Event, who pulled the dinner together with awards producer Kathy Connell; awards committee members JoBeth Williams, Daryl Anderson, Scott Bakula, Shelley Fabares, and Paul Napier; and Benn Fleishman, the SAG awards executive in charge of production.

For the 16th annual SAG Awards at the Shrine Auditorium on Saturday, Greco and Schall took their color cue from set designer Joe Stewart’s glittery bronze-and-gold backdrop; they draped long tables for 1,200 guests in crinkled bronze cloths and topped them with gold smoked-glass chargers and arrangements of white orchids and roses in custom arched silver floral boxes. Guests dined on Lucques’ plates of lamb, salmon, chicken salad, and couscous with roasted vegetables and sipped a cabernet sauvignon specially bottled by Dry Creek Vineyards in honor of its 10th anniversary of participation.

Another longtime beverage sponsor was Taittinger Champagne, for which organizers designed a new "Taittinger Moment" to kick off the festivities on the red carpet: Mad Men actor John Slattery joined two black-clad models, who unwrapped a gift-boxed three-foot-tall dummy Champagne bottle before joining in a toast.

After the awards show, guests moved on to the traditionally lavish SAG Gala hosted by People magazine and the Entertainment Industry Foundation in a mammoth tent steps away from the Shrine. Extensive draping usually transforms the 100-foot-long tent into a sumptuous environment. This year, designer and producer Tony Schubert of Event Eleven, overseen by Time Inc.’s Cyd Wilson, put a new twist on the usual formula by building hard walls of birch treated with a blue stain and finished with baseboards and crown moldings.

The unusual paneling inspired the party palette of blues, greens, and purples against a neutral swath of gray vinyl-covered furniture (last year’s seating, recovered to conform to SAG’s green initiatives). More than 5,000 yards of blue-green mirror organdy draping covered the ceiling, suspended from three soffits. Beneath the draping, Schubert suspended 400 Edison light bulbs at varying heights, forming a wave pattern. Dotting the light installation were 27 plexiglass globes filled with purple hydrangeas and orchids, dangling from clear fishing line so as to appear to be floating in mid-air.

Guests cruised Wolfgang Puck’s buffet of luxe comfort foods such as beef Wellington and mini turkey pot pies. By 10 p.m., the crowd was on its feet dancing, just in time for Uncle Kracker’s 30-minute performance. At 11 p.m., the bars shut down, and the revelers went off into the night. 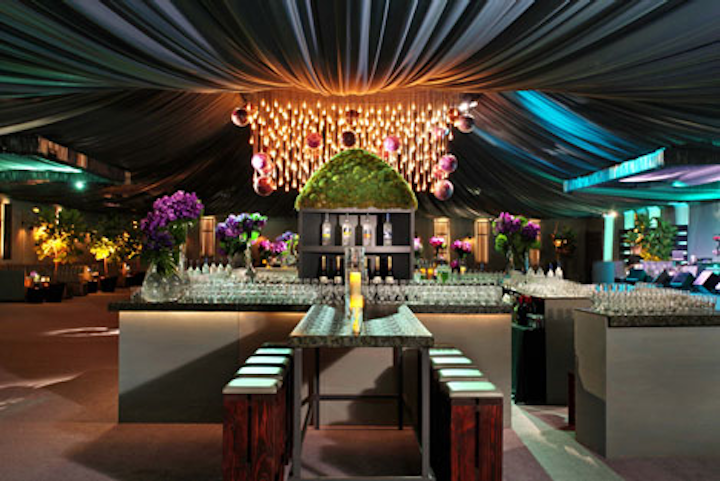 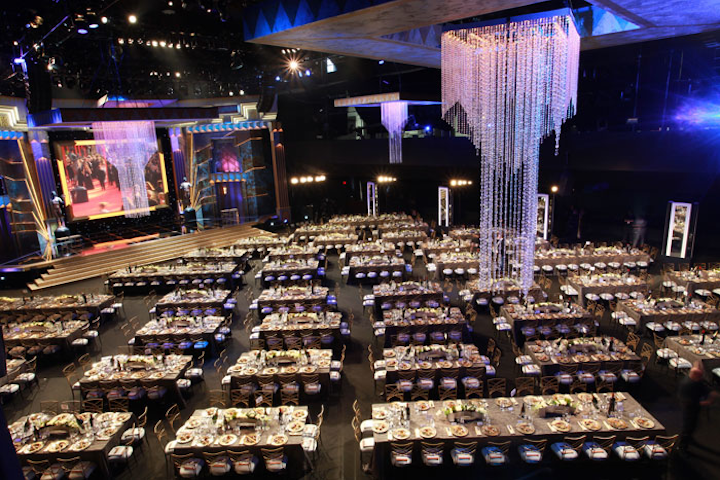 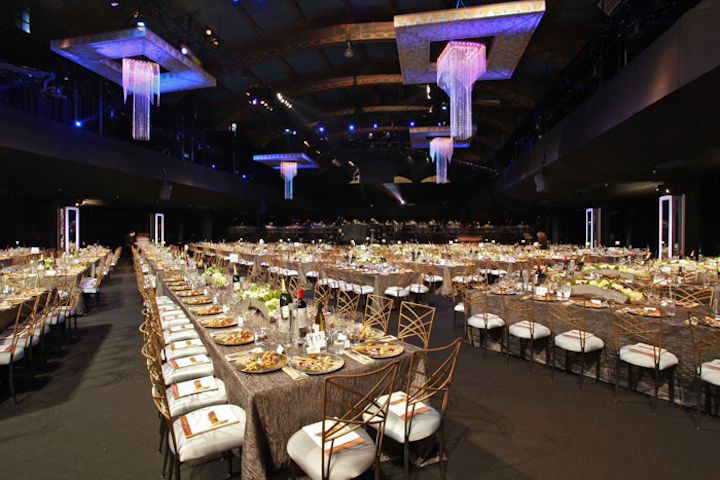 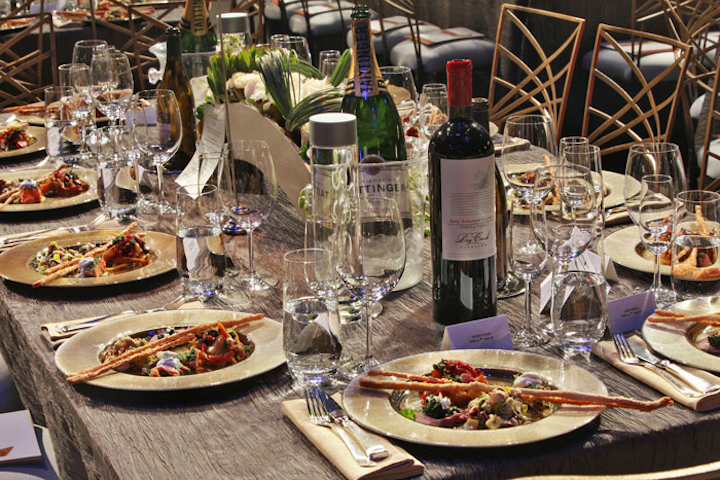 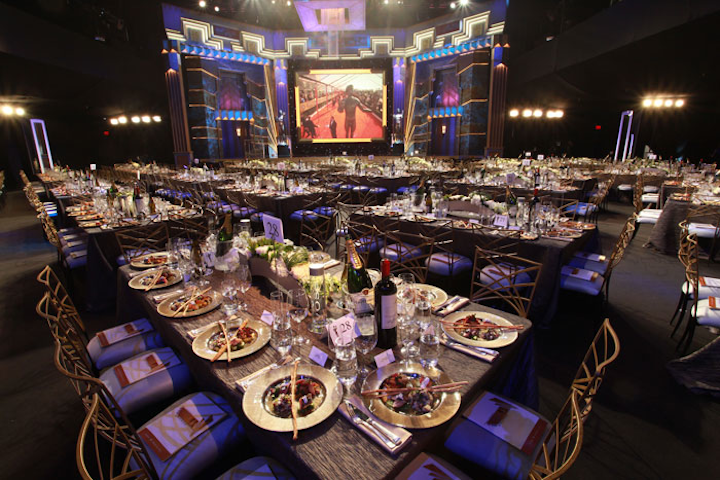 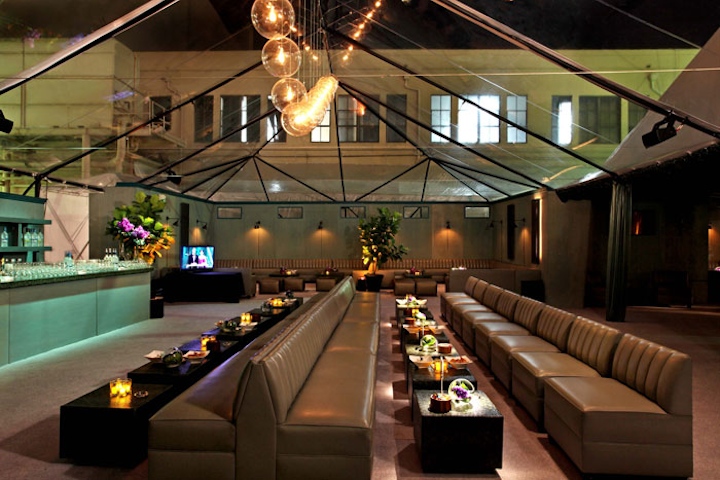 After the award show, guests moved to the SAG Gala, hosted by People magazine and the Entertainment Industry Foundation in a tent steps away from the Shrine.
Photo: Nadine Froger Photography 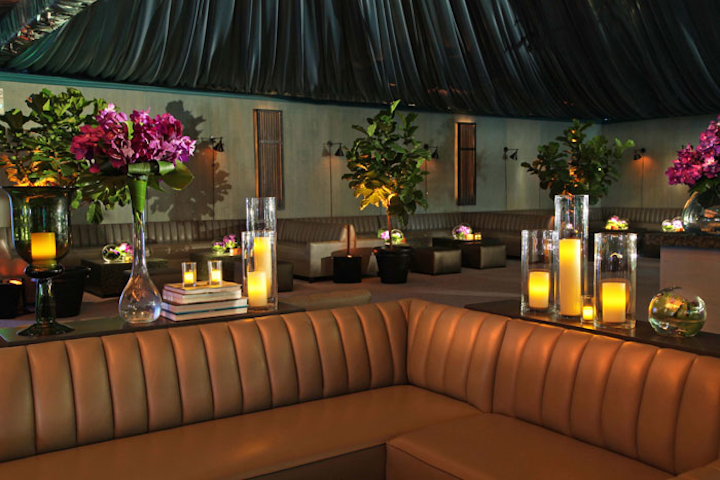 The party had a palette of blue, green, and purple, with gray vinyl-covered furniture.
Photo: Nadine Froger Photography 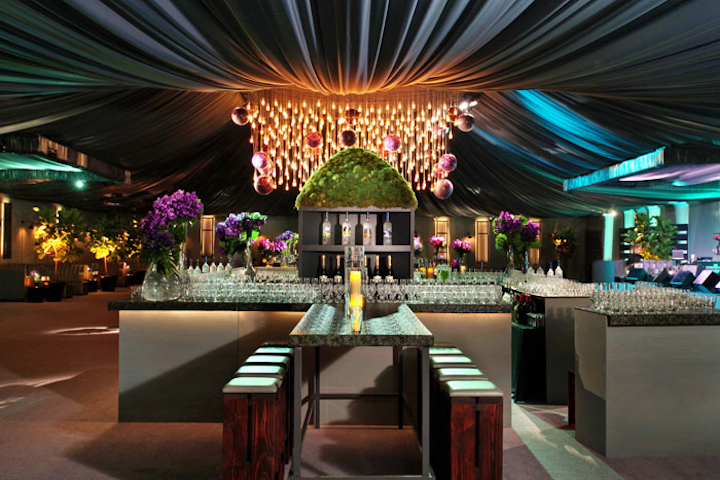 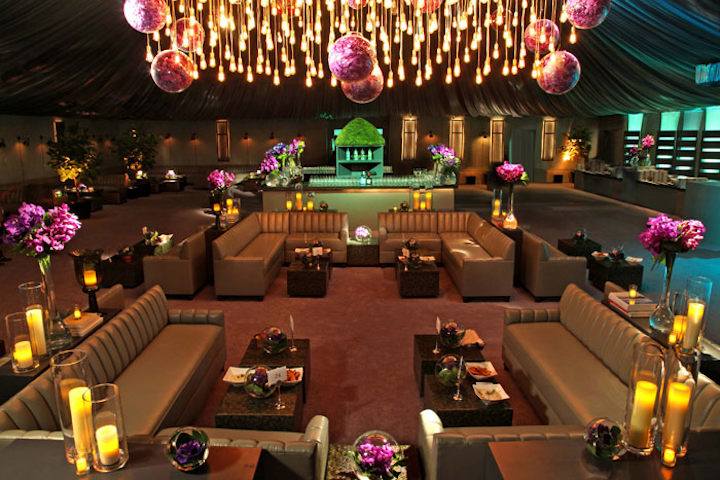 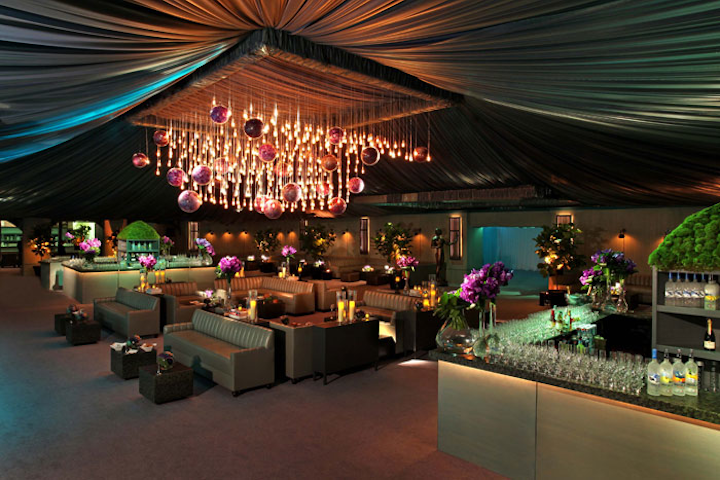