Need to Boost Gala Attendance? Get a Space Shuttle

Looking for new ways to bring in big bucks for your annual charity event? Take a tip from the California Science Center: Bring a retired space shuttle into the venue. (We're joking, but it does produce results.)

After it scored one of NASA's coveted crafts late last year amid buzzy citywide pomp, the museum sold out tables for its Discovery Ball—even before the invitation dropped. Coupled with live auction tallies, the event, which took place under the wings of the Endeavour on Saturday night, secured a record-breaking night for fund-raising, taking in $1.5 million.

In celebration of Endeavour, this year’s theme was “Space Exploration: Past, Present, Future.” Overseeing the event was the museum's vice president of food and event services, Christina Sion, who described the plan as intended to "take guests on a journey, not only through space but also through time." Folks checked in at stations meant to evoke 1961, the height of the country's interest in space travel. Dinner took place in the present, under the jaw-dropping spectacle of the Endeavour. An after-party in a nightclub setting was meant to conjure the future, 2099 to be precise, where guests boogied in a futuristic space inspired by Tron.

Recalling the 1960s, a Pan Am-inspired check-in desk offered seating cards in the form of mock boarding passes. Guests made their way to cocktails in the so-called "Area 51 Lounge” on the first floor, which had a giant retro flying saucer as a bar back. Upstairs, Rrivre Works helped with the set up of spacey bars, including one offering Tang cocktails.

Following the dinner and live auction, led by KTLA 5 co-anchor Chris Schauble, guests moved back to the cocktail space, which they found flipped for a nightclub-style after-party with a look dubbed "Club Eon" for the occasion. Party decor was half black and half white, split down the middle with glowing blue accents. A "Nitro" ice cream station offered futuristic versions of the confection prepared with liquid nitrogen. Cupcake Wars provided on-theme desserts after filming a portion of the show in the event space. 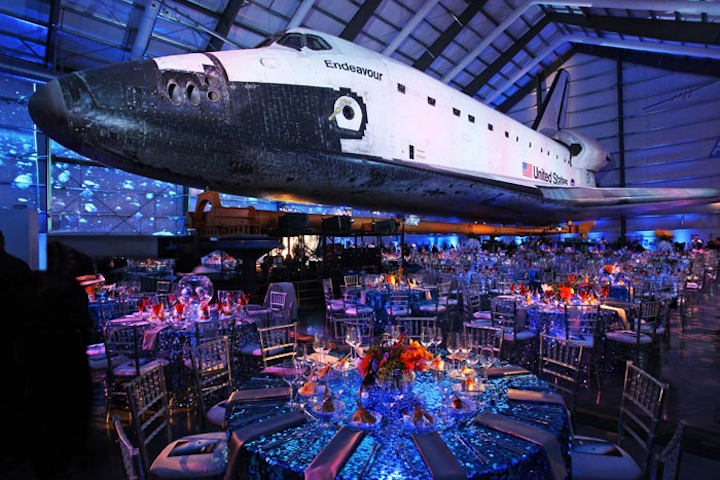 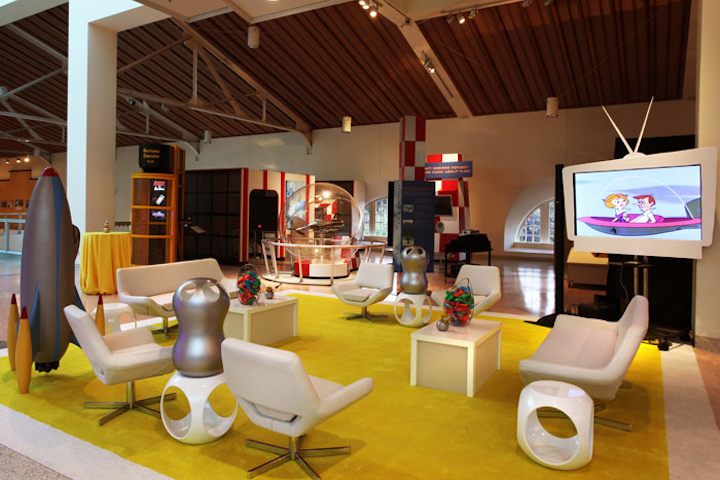 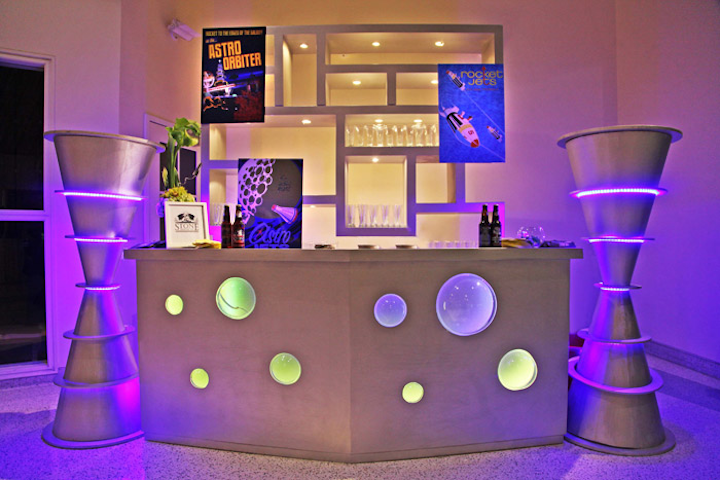 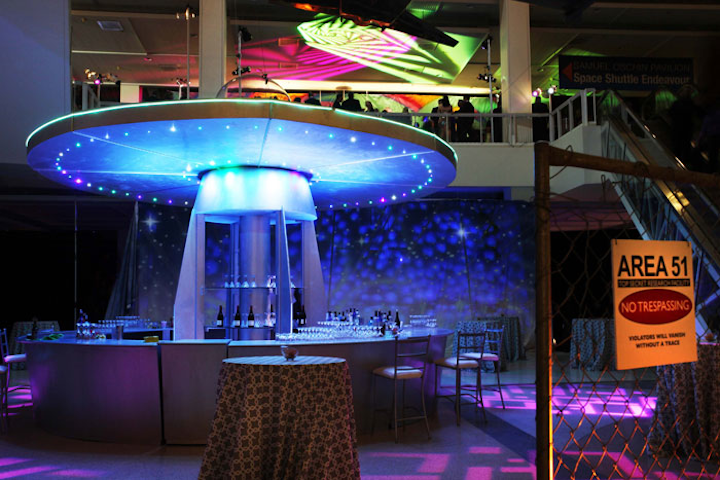 The "Area 51 lounge" had a giant retro flying saucer as the backdrop for the bar.
Photo: Nadine Froger Photography 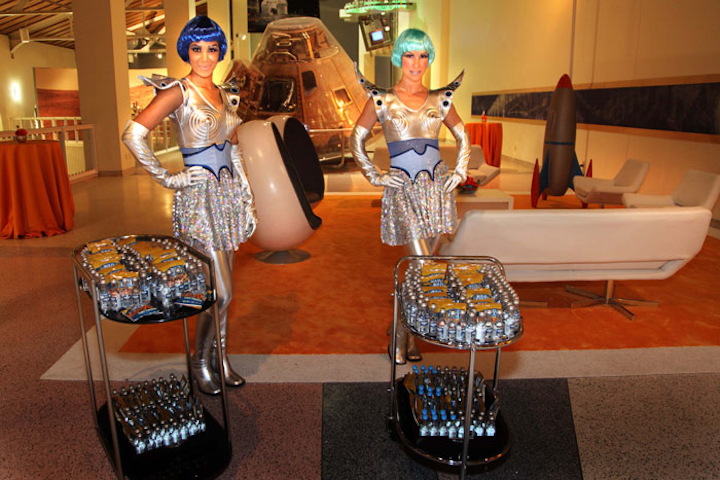 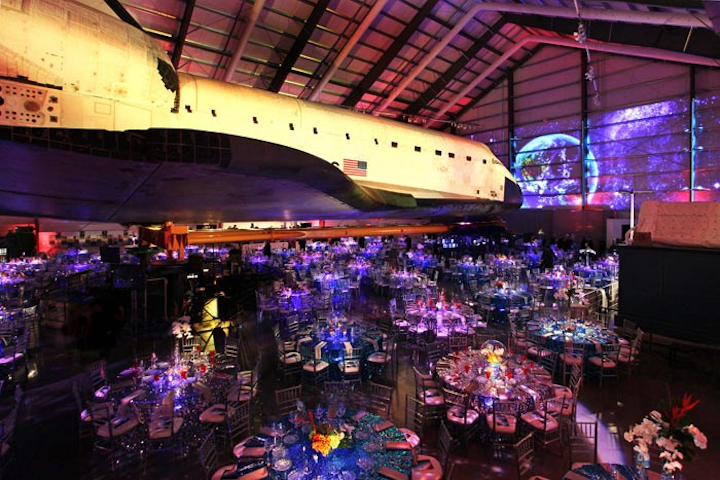 Projections around the room seemed to transport guests into space after takeoff from Los Angeles.
Photo: Nadine Froger Photography 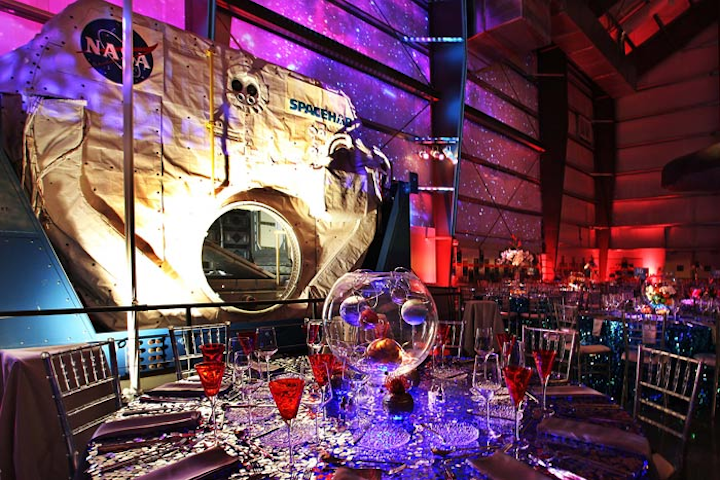 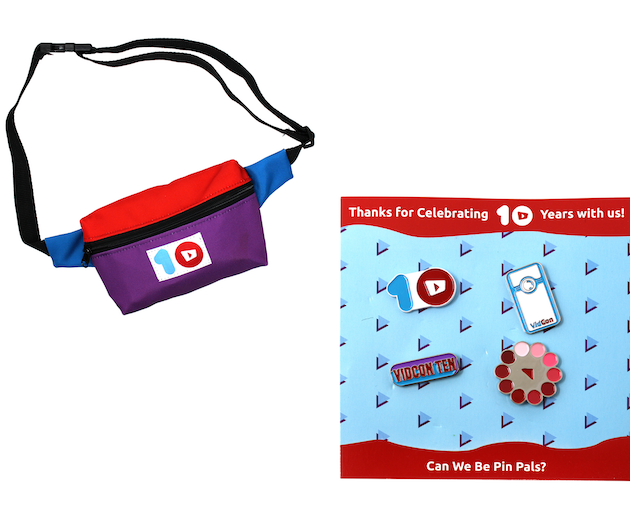