Is This the Future of Female-Led Conferences?

The inaugural In Good Company conference offered a creative, comfort-driven space for working mothers—and their children.

In Good Company made a splash next to the San Francisco Bay at its inaugural conference for creative and entrepreneurial mothers on September 29. More than 400 women gathered at Gallery 308 at the Fort Mason Center for the sold-out event to exchange ideas and collect information and inspiration for how to approach their lives and careers.

The conference was the brainchild of Mother magazine co-founder and editor Katie Hintz-Zambrano, who had become disillusioned by many of the lifestyle conferences she had attended. “The visuals were always beautiful, but intellectual depth was often lacking,” she said.

When Hintz-Zambrano started thinking about her dream event, she decided to shake up the “mom conference” and focus on a specific audience: creative, business-owning mothers.

Hintz-Zambrano assembled a roster of speakers, from handbag designer Claire Vivier to Solly Baby founder Elle Rowley to Women’s March co-chair Bob Bland. Instead of making motherhood a footnote about balance during the conference, Hintz-Zambrano built an entire program around practical topics such as using social media to power a creative business—including a discussion about featuring kids on social media—and juggling professional and family obligations.

“The women that attended In Good Company really exemplify to me what modern motherhood looks like,” Hintz-Zambrano said. “It’s mature women who are clued into themselves, their children, and their passions. They haven’t completely abandoned who they were pre-motherhood. They are educated and ambitious and thoughtful and stylish. They are not what most marketers think of when they think of the label ‘mom.’ I really want to help shift this perception of what modern mothers are.”

As much as In Good Company sought to redefine modern mothers, it also redefined modern conferences. To start, many attendees brought their babies with them—a sight you don’t see at the average professional gathering.

Then there was the space: Rather than a dark auditorium or hotel ballroom, In Good Company was held in a light-filled main room and an adjoining outdoor networking area furnished with Ikea chairs and sponsor activations. The stage was outfitted with plush sofas and oversize floral arrangements. At the back of the space, a “mothers lounge” hosted by Plum Organics drew a constant stream of women looking for a place to pump, breastfeed, or let their babies de-stimulate.

“I thought it was important to have a comfortable place for lactating women to sit down and pump,” Hintz-Zambrano said. “We set out to create a beautiful room with lots of outlets so that pumping mothers could be comfortable while doing something that’s not always so comfortable. And breastfeeding mothers with their babies present could take a load off and nurse and play with their babies in a nice space.”

In Good Company also boasted attendee perks, including a Levi’s Trucker jacket customization station, beauty touch-ups in the Beautycounter Beauty Lounge, sneaker giveaways by The Ones, an all-day snack bar by Diamond, wireless breast pump demos by Willow, a gelato break sponsored by Ingrid & Isabel, a kids’ lunchbox station by Annie’s, and a photo booth. According to Hintz-Zambrano, it was all part of creating a “dreamy, well-rounded day” for attendees.

While the conference was a success, Hintz-Zambrano is already considering how she can improve and grow the next event. “Because the event sold out so quickly, there were so many folks who really, really wanted to attend, but who I just couldn’t allow in for headcount reasons,” she said. ”There is such a hunger for this type of content and conversation; everyone is already asking about the next one.”

For those who couldn’t attend the live event, there’s another chance to take in all the stories and tips shared throughout the day. In Good Company is offering a “digital pass” for $65 to access the keynotes and panel discussions. The digital pass will be activated in November, and content will be viewable for one year. 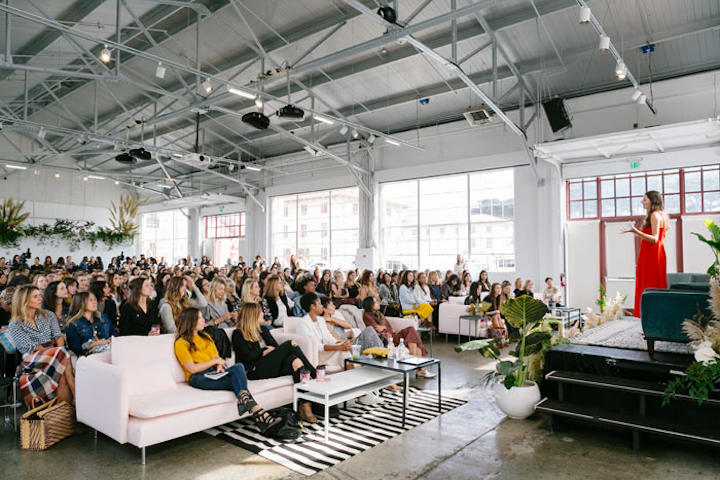 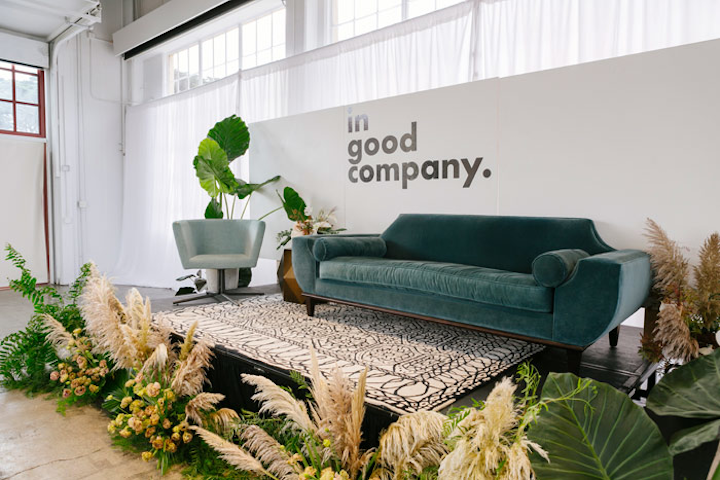 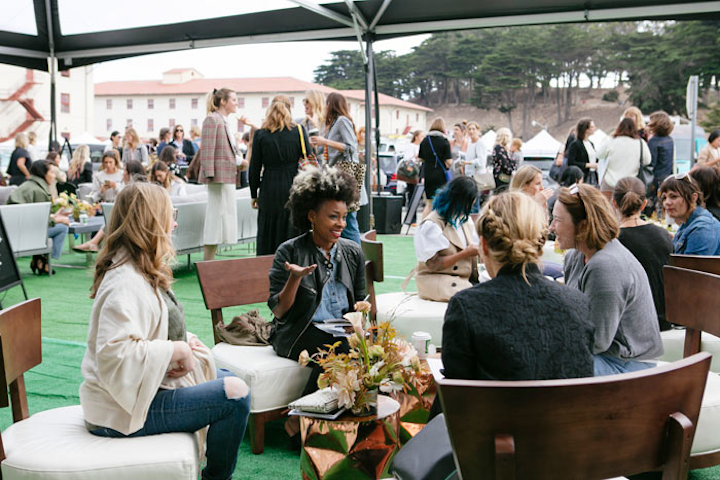 A networking area filled with Ikea furnishings and sponsor activations was located outside the venue.
Photo: Kara Brodgesell 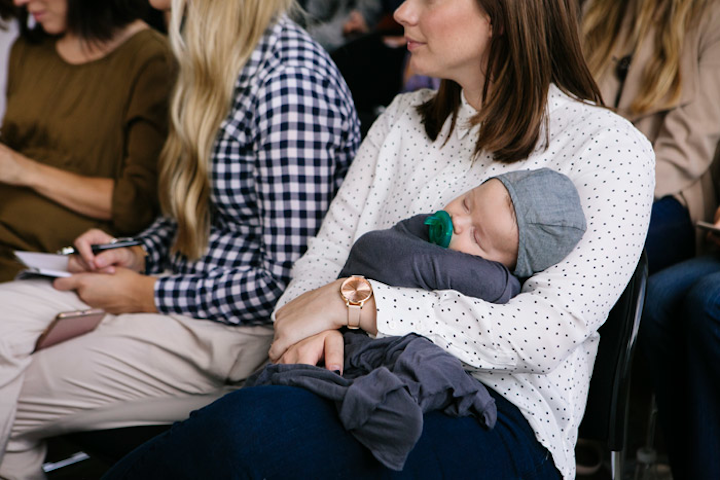 Mothers were encouraged to bring their children to the conference. Atlejee designer Suvi Silvanto brought her nine-month-old son, Alfons. “I don’t have to worry if my baby’s accepted or not. That makes it unusual,” Silvanto said.
Photo: Kara Brodgesell 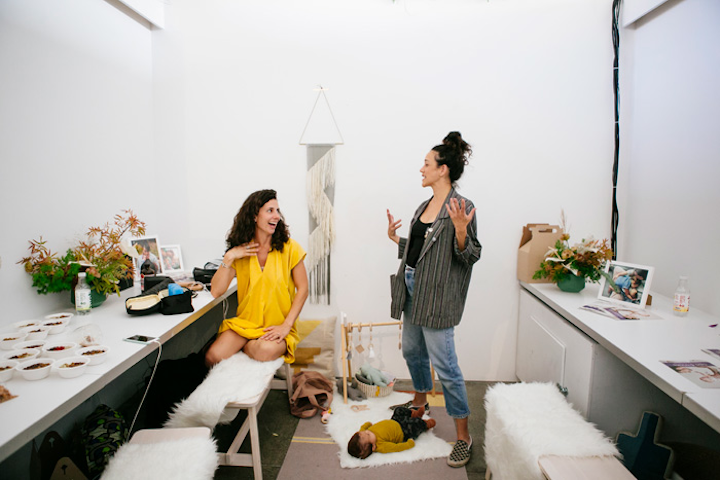 A mother’s lounge by Plum Organics gave breastfeeding or pumping mothers—or women who had brought their babies to the event—a place to relax and decompress. Toys by Shop Bitte were on hand to entertain the kids.
Photo: Kara Brodgesell 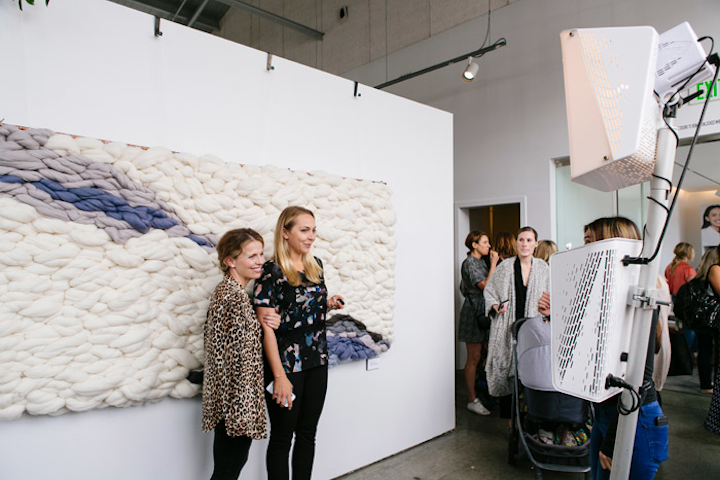 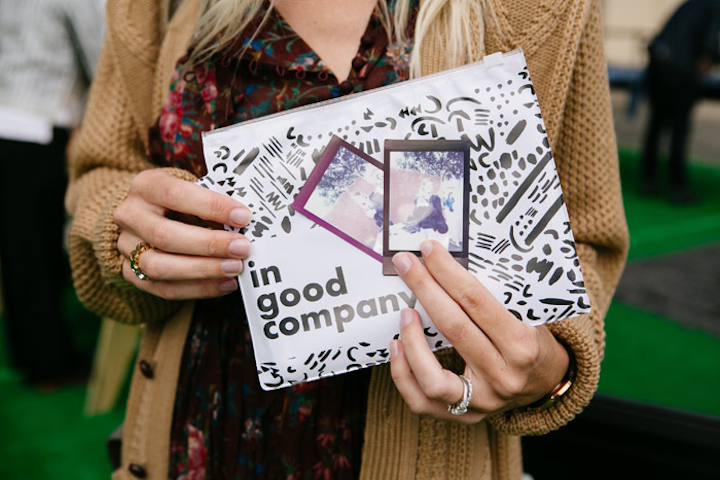 Attendees received small program booklets that included a blank page in the back. Attendees were encouraged to use the page to write down information for new contacts, or “to collect friends,” according to conference founder Katie Hintz-Zambrano.
Photo: Kara Brodgesell 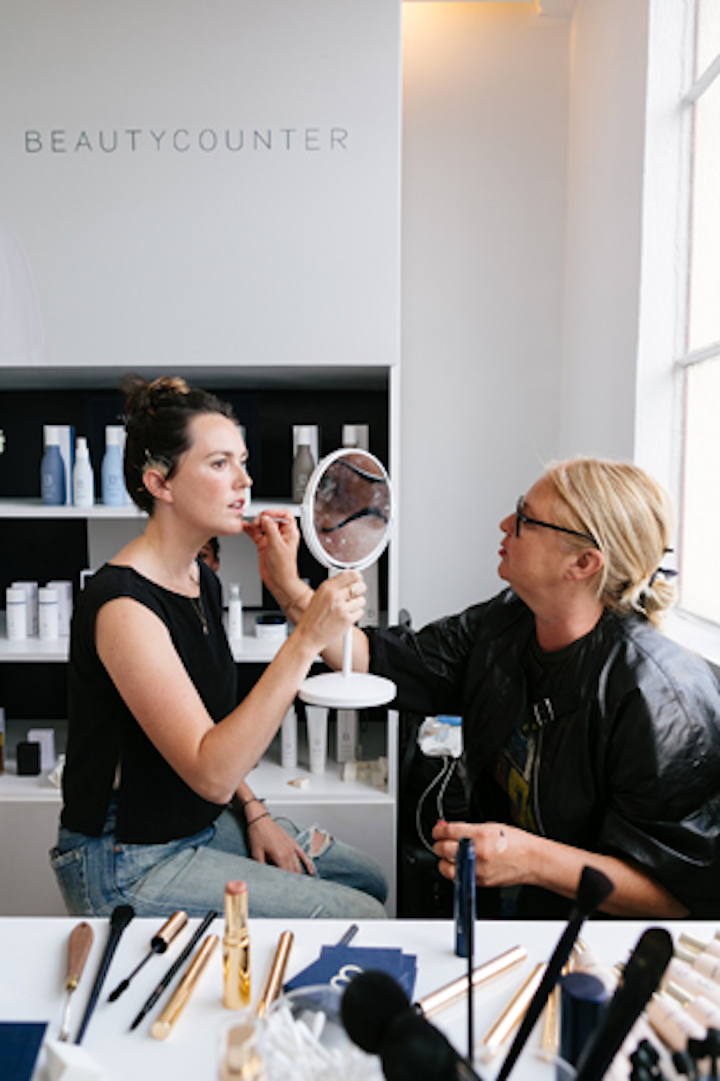 A lounge by clean beauty company Beautycounter offered touch-ups and tutorials through out the day. Manicures and hand massages were provided by Parlor spa.
Photo: Kara Brodgesell 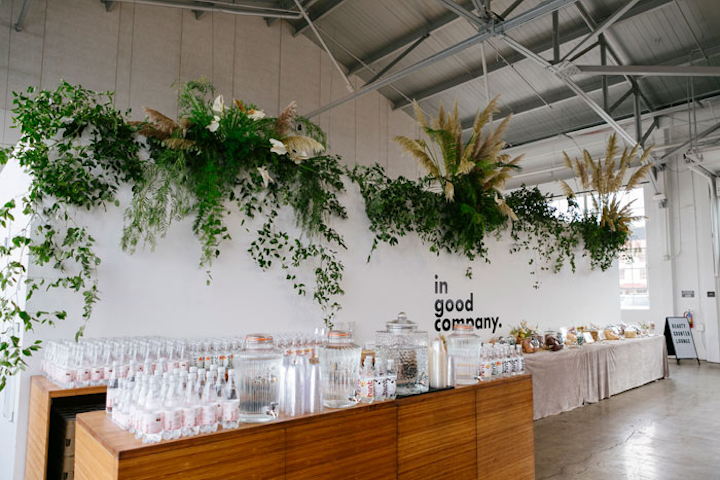 Diamond of California set up an all-day snack and drink bar in the back of the room.
Photo: Kara Brodgesell 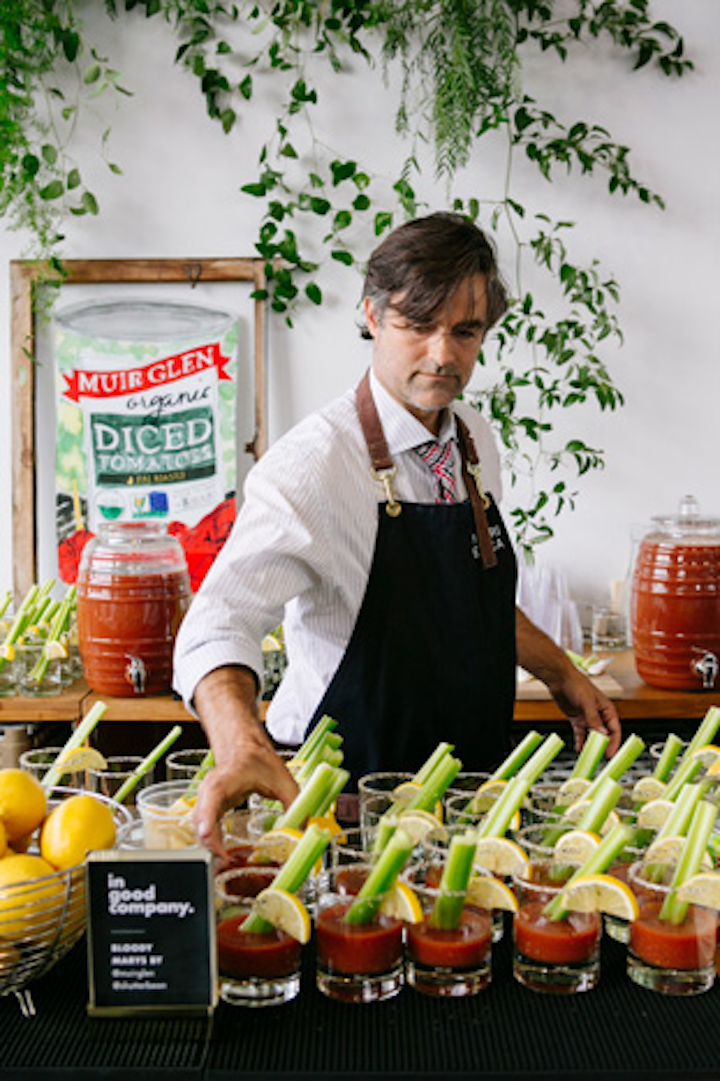 Bloody Marys were offered during a break between sessions.
Photo: Kara Brodgesell 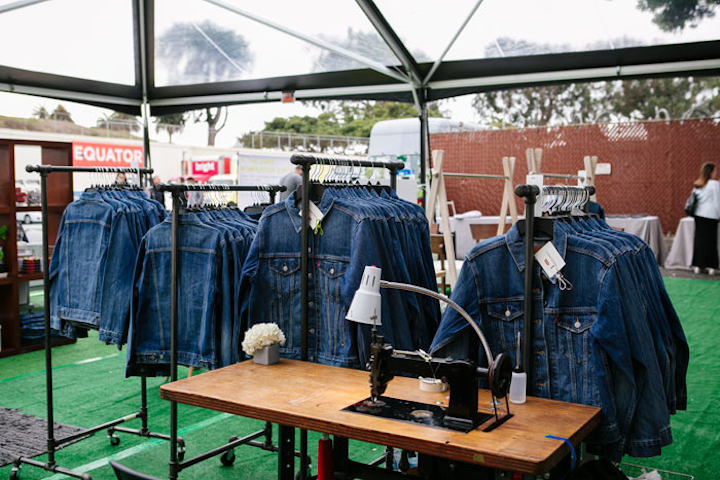 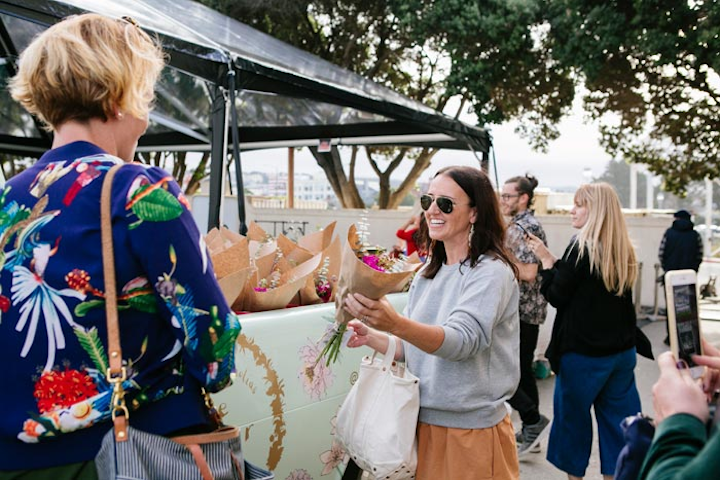 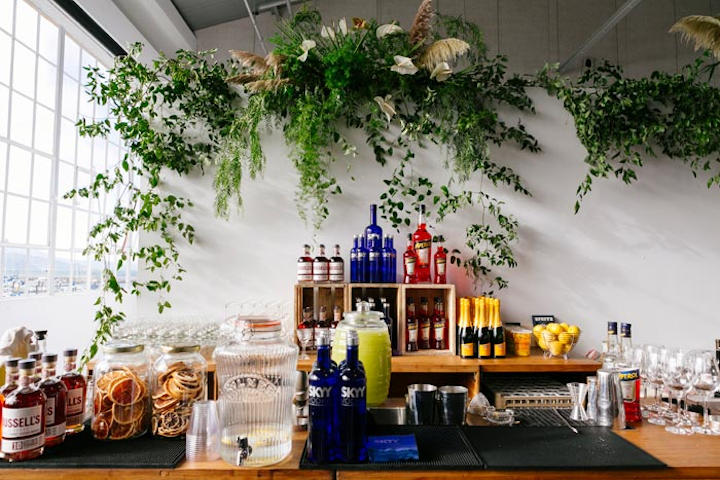