What Changed About the N.F.L. Draft This Year

Thousands of football fans touched down in New York City last week for the National Football League’s three-day player-selection process, which was held at Radio City Music Hall from May 8 to 10.

This year, the league chose a new marketing campaign—“On the Clock.” Each team was allotted six minutes to make its player selection, making the countdown a significant part of the draft. The theme for the last two years was “Welcome to Primetime” in celebration of the event’s move from being a two-day event over the weekend to a major evening broadcast in 2010.

In addition to the updated theme, the fans took center stage this year. Usually, the team tables and media are seated at the front of Radio City, near the stage. For 2014, the tables were moved back, while press was bumped up to the second-level mezzanine, similar to a press box at a game, said Eric Finkelstein, the N.F.L.’s senior director of events. By bringing the fans closer to the stage, the league hoped to create better energy in the venue and for the broadcast, he said.

The teams handpicked their “super” fans from among season ticket holders; the draft is free and open to the public, with opportunities for fan engagement throughout the three-day event, including panel discussions with former players and photos with the Vince Lombardi Trophy.

“The N.F.L. reexamines everything, every year, in terms of broadcast, space, and timing,” said Tracy Perlman, vice president of entertainment and player marketing for the league. “We’re always evolving to make things better for the fans.”

This evolution may include a new city in 2015.

Rumors have been circulating that the draft is leaving the Big Apple, partly due to Radio City’s unpredictable schedule; the draft usually occurs at the end of April but was moved to May this year because of a timing conflict with the venue. It has been held in New York City since 1965, but cities like Los Angeles and Chicago are hoping to woo N.F.L. executives. Similar to the Super Bowl, team owners and organizers could end up making bids to host the draft in their respective cities, Perlman said.

“Tell me where it needs to go, and I’ll make it happen,” Finkelstein said. “From my perspective, I need to make it as seamless of an event as possible—wherever it ends up.”

Production discussions for the draft start right after the Super Bowl, said Finkelstein, whose crew started loading in the stage, which is the length of one street block, on May 2.

In addition to the draft itself, the N.F.L. also co-hosted two Draft Eve parties with official league sponsors Bud Light and Verizon on May 7.

The Verizon party, held at the Edison Ballroom in Midtown Manhattan, featured the telecommunications company’s signature colors and signage throughout the venue, along with highboy tables doubling as charging kiosks. The 400 guests, including N.F.L. staff, Verizon executives, and former players, dined on passed hors d'oeuvres, sushi and sashimi, and a dinner buffet.

Similarly, Bud Light, which also sponsors Round 2 of the draft, took over the Hard Rock Café in Times Square, with Anheuser-Busch signage and decor weaved throughout the space. The tourist hot spot served classic football fare, such as soft pretzels and hot dogs, along with passed hors d'oeuvres, to the 125 guests, who included sweepstakes winners and local beer distributors.

Other draft festivities included the NFL PLAY 60 Youth Football Festival, held at Chelsea Waterside Park, where draft prospects, along with former and current players, teamed up with area students from New York and New Jersey to practice their gridiron skills on May 7 and 8. 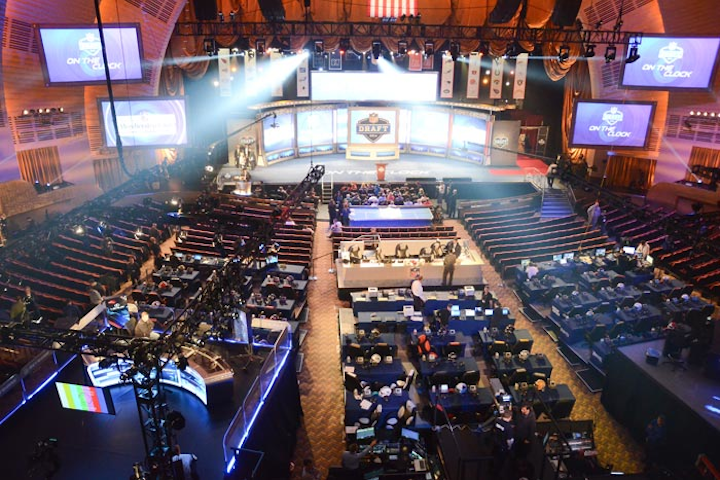 The National Football League held its 79th Draft at Radio City Music Hall from May 8 to 10.
Photo: Gustavo Ponce for BizBash 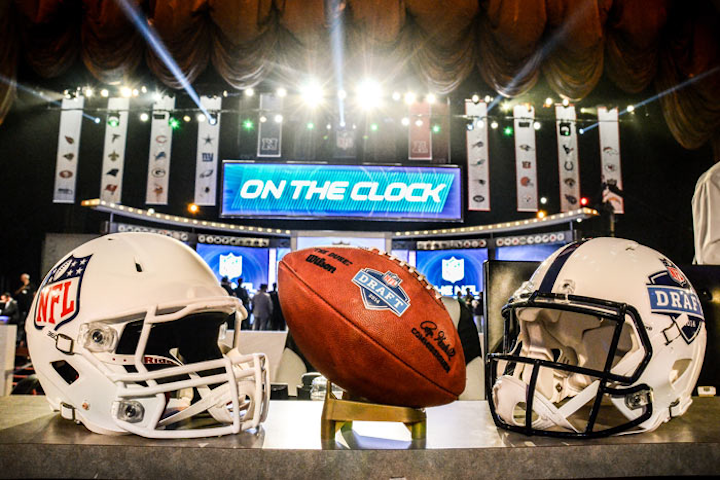 Each team was allotted six minutes to make its player selection, making the countdown a significant part of the draft and the inspiration for this year's theme—“On the Clock.”
Photo: Gustavo Ponce for BizBash 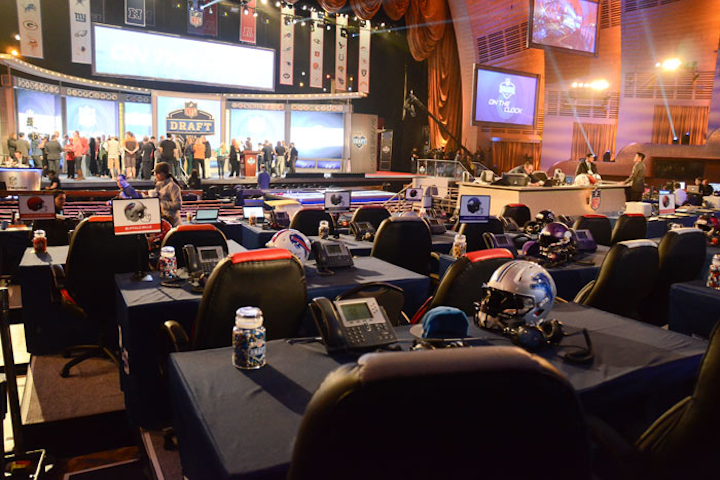 For this year's draft, the team tables were moved back to accommodate more fans near the front of the stage.
Photo: Gustavo Ponce for BizBash 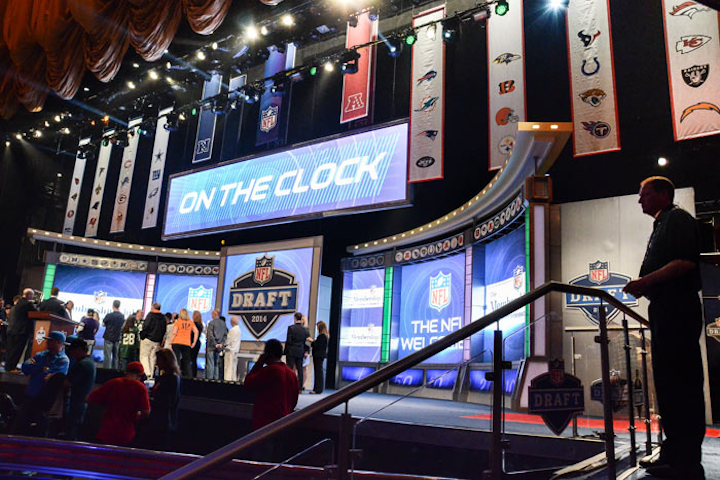 The stage—including the backstage area—is the length of one New York City street block.
Photo: Gustavo Ponce for BizBash 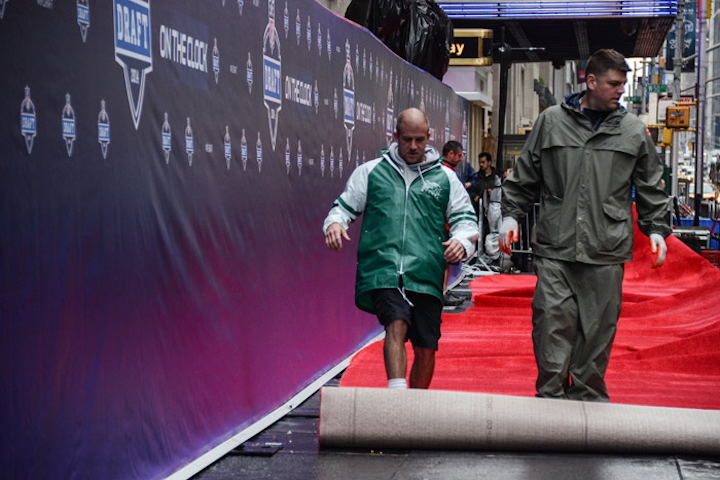 On May 8, 30 draft prospects walked the red carpet at Radio City Music Hall, the most players in the N.F.L. Draft history.
Photo: Gustavo Ponce for BizBash 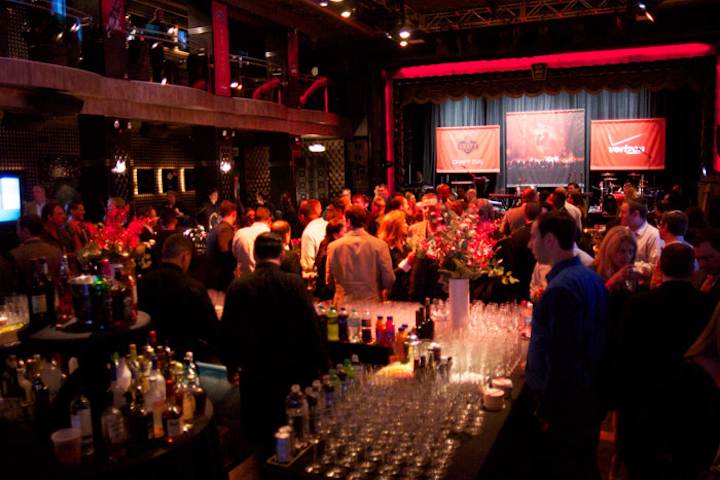 Verizon's Draft Eve party, held at the Edison Ballroom, featured the telecommunications company’s signature colors and signage throughout the venue, along with highboy tables doubling as charging kiosks.
Photo: Chris Gersbeck for BizBash 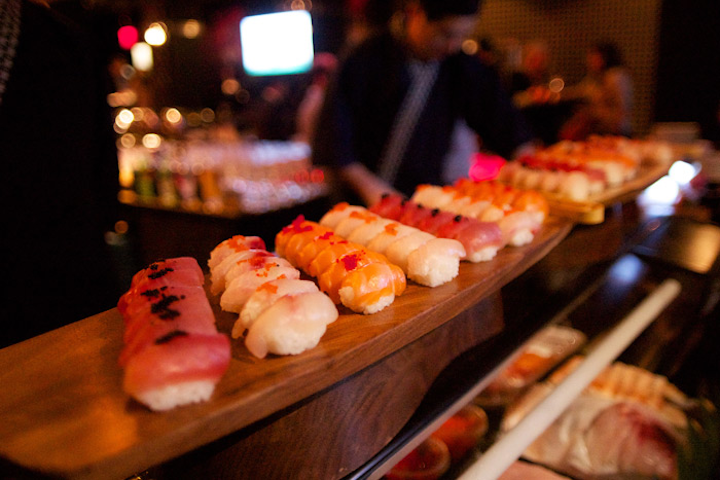 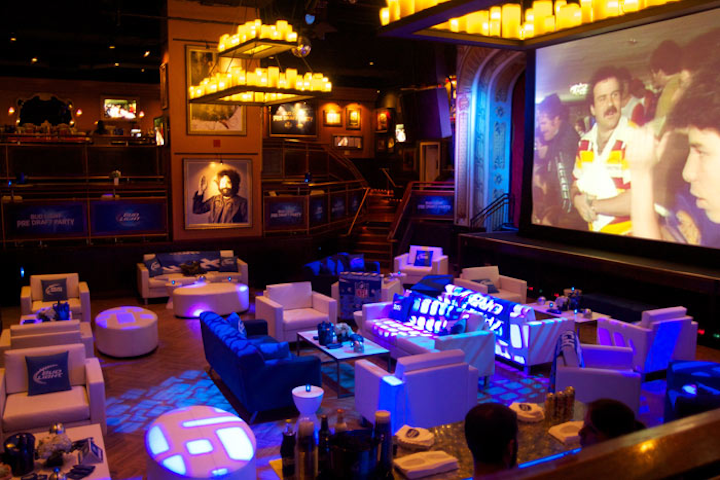 Bud Light, which also sponsors Round 2 of the draft, co-hosted a Draft Eve party with the league at the Hard Rock Café in Times Square, decorating the white leather furniture with its own pillows and throws.
Photo: Chris Gersbeck for BizBash 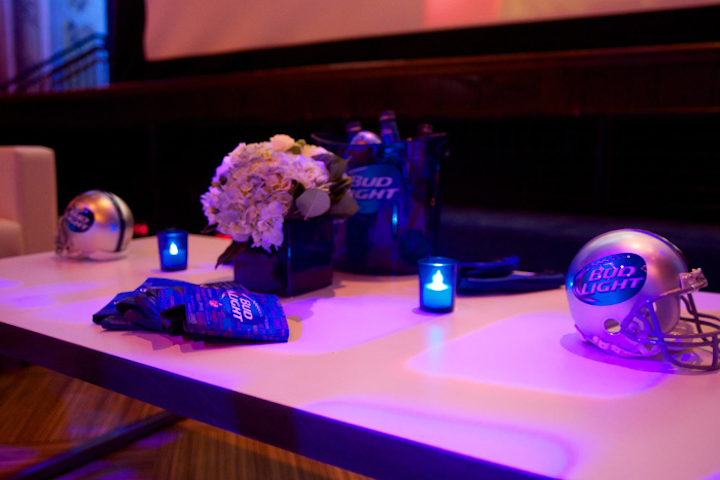 Sweepstakes winners and local beer distributors were among the 125 guests in attendance at the Bud Light Draft Eve party.
Photo: Chris Gersbeck for BizBash
More in Strategy