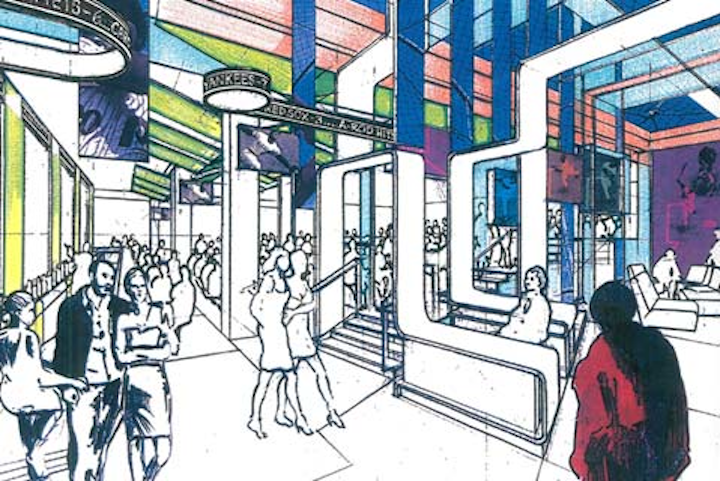 Fall is looming and although the weather is beginning to cool down, venue openings are only just starting to heat up. Typically the busiest time of year for restaurant, bar, hotel, and other venue openings, the next three months will see a slew of new spots and some, like Batali-Bastianich project Eataly, are opening this week. Here's a look what's on the agenda for fall's biggest openings

1. Bowlmor Times Square
Among the largest venues opening this year is the new bowling alley from Strike Holdings, a mammoth 90,000-square-foot facility inside the former New York Times building on West 44th Street. On track to debut in October, the bilevel complex will have 50 lanes divided among seven themed areas, a 220-seat restaurant from David Burke dubbed the Stadium Grill, three lounge sections, and a dedicated area for private events.

2. Setai Fifth Avenue
Managed by Capella Hotels and Resorts, the newest Setai hotel will open on November 1 on a relatively quiet stretch of Fifth Avenue. Furnished with 157 rooms, 54 apartment suites, and three penthouse apartments, the sleek limestone-clad tower will also come with a second floor restaurant, an 11,500-square-foot spa spread across the entire fourth floor, and dedicated meeting space on the third floor. The latter will include a 2,394-square-foot banquet hall, which can be divided into three separate rooms.

3. James New York
Scheduled to open today, September 1, the New York sibling to the James Chicago will be located in SoHo. The 20-story boutique hotel will offer 114 rooms, a rooftop lounge and bar with a pool, an indoor-outdoor event space with built-in videoconferencing, and a restaurant. Also on tap will be a rotating series of work by local artists and a lobby overlooking LentSpace, an exhibition site from the Lower Manhattan Cultural Council.

4. Whitney Museum of American Art Café
Although its biggest project is the planned satellite location by the High Line, the Whitney Museum of American Art will unveil a change to its Madison Avenue home in the fall. The lower level gallery and sculpture court, where most events take place, will house a new café operated by Danny Meyer's Union Square Hospitality Group and designed by the Rockwell Group.

5. Lincoln
The much anticipated Lincoln Center restaurant from the Patina Group and chef Jonathan Benno will debut in late September. An eye-catching glass exterior and a sloping roof topped with a grassy lawn designed by Diller, Scofidio & Renfro will mark this ambitious establishment, a 120-seat eatery serving Benno's Italian fare. The restaurant will also include a private dining room and outdoor seating.

6. FoodParc
Upscale food halls appear to be the latest trend in the city's dining scene, and Jeffrey Chodorow is another restaurateur with plans for such as spot. Expected to open in September, FoodParc will be a 20,000-square-foot multilevel venue inside the newly opened Eventi hotel. In the plans for the modern food court are gourmet stands and stalls for burgers, dim sum, and other dishes as well as a formal sit-down restaurant.

7. Ai Fiori
In keeping with the growing number of chef-driven hotel restaurants, the Setai Fifth Avenue will open its in-house spot, a contemporary Italian eatery from chef Michael White. Slated for late fall, Ai Fiori will be accented with black oak floors, limestone accents, and built-in bookcases and offer 185 seats for dining and a 40-seat bar.

8. Bill's Bar & Burger—Rockefeller Center
Despite some delays, Stephen Hanson's B.R. Guest Restaurant Group still has plans to expand its casual beer-and-burger concept to Midtown with the opening of a Bill's Bar & Burger in Rockefeller Center. Currently slated to open sometime in the fall, the restaurant will occupy an 11,000-square-foot bilevel space, have 563 seats, and include wall murals from artists like Dan Clements and Mark Newgarden.

9. Atlantic Grill Lincoln Center
Hanson also has another restaurant in the works: a second Atlantic Grill outpost, on West 65th Street in a spot that housed 46-year-old Irish pub O'Neals. The seafood house is expected to have 250 seats and will open in September.

10. Hurricane Club
AvroKO is designing this new venture from Michael Stillman and Craig Koketsu, the duo behind Park Avenue Summer/Autumn/Winter/Spring and Quality Meats. Scheduled to open in mid-September in the Park Avenue South and 26th Street site formerly occupied by Porcao, the Hurricane Club will be a Polynesian-themed restaurant and bar with 250 seats.