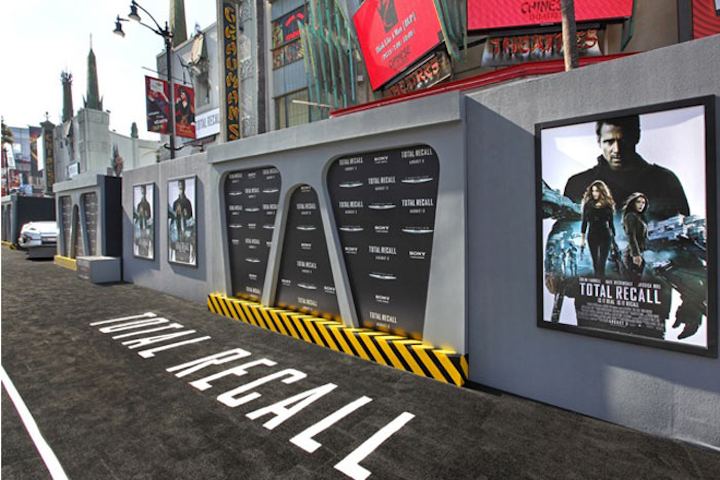 Total Recall premiered at Grauman's Chinese Theatre with a logo-inset carpet and props galore from the film.
Photo: Line 8 Photography. All rights reserved.

On August 1, Total Recall premiered at Grauman's Chinese Theatre with a splashy, props-heavy arrivals setup overseen by Sony Pictures Worldwide Marketing & Distribution senior vice president of special events Alison Bossert and produced by 15/40 Productions. The arrivals-carpet design incorporated a hovercraft from the film as well as four models dressed in costume as "New Asian Federal Police Officers" positioned on raised platforms along the step-and-repeat wall as if to stand guard over the pomp. The backdrop walls incorporated a pattern seen in the design of a setting in the film known as "the Fall," a transport system that runs through the middle of the planet connecting the two habitable areas left on Earth and where the final battle scene of the movie plays out. The black carpet also bore an inlaid logo of the movie's title.