The hottest hotels, conference spaces, restaurants, cultural spaces, and more to open for events and entertaining this year.

This year saw the opening of many significant event and meeting venues in Chicago. Here's a look at the best restaurants, party rooms, hotels, corporate event venues, conference centers, and private rooms to open in 2017. These new and renovated Chicago venues suit groups large or small for private and corporate events, business dinners, cocktail parties, conferences, weddings, and more. 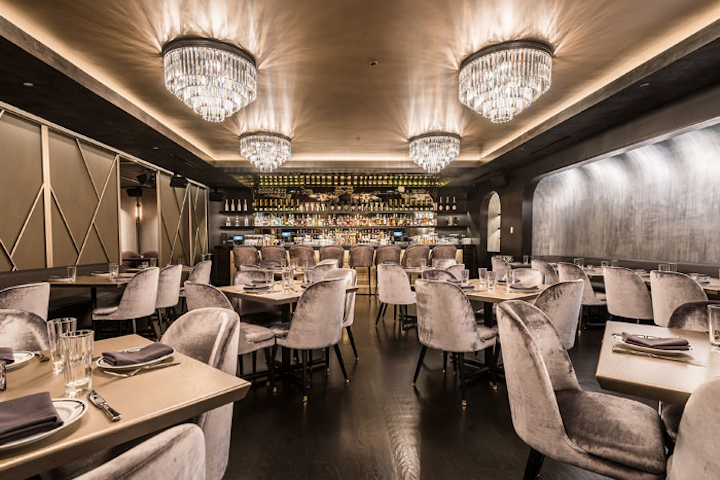 BLVD came to Fulton Market in June. Inspired by Hollywood in the 1950s, the restaurant offers shareable plates of American fare—think whipped-avocado toast, house-made pappardelle, and giant seafood towers. Upstairs, a private dining space known as the Champagne Room holds seated dinners for 50, and has an additional 10 seats at its bar. The room also holds standing receptions for 75. Just off the Champagne Room, the Lounge holds seated dinners for 35 or receptions for 50. Hosts may opt for a full upstairs buyout, reserving the Champagne Room and the Lounge together. Downstairs, the main dining room seats 85 for dinner; it also has a bar with nine seats and high-top tables that seat 16. The entire venue is available for buyouts. 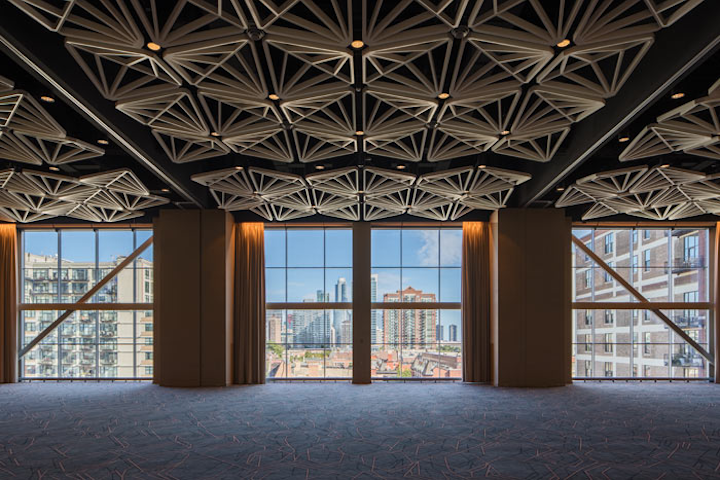 When it opened in September, the Marriott Marquis Chicago took the title of the largest hotel to open in Chicago this year and the largest Marriott to open in North America. Located in McCormick Square—the city’s new entertainment and convention district, anchored by McCormick Place and the new Wintrust Arena—it boasts 1,205 guest rooms across 40 stories. Chicago-based Anderson/Miller Ltd. designed the interior and infused it with subtle nods to the city. The main tower, for example, features angular motifs evocative of Chicago’s many bridges, which also are celebrated in unique lightbox artwork that adorns every guest room. Custom carpeting likewise references the neighborhood—one carpet’s V-shaped design, for instance, resembles tread marks in homage to nearby Motor Row—while large windows frame grandiose views of the Chicago skyline. Works by more than 30 local artists decorate the lobby, as well as the hotel’s various hallways and corridors; each features a video-enabled QR code that guests can use to take a self-led art tour through the property with their smartphone. Like the hotel itself, meeting space is expansive, totaling 93,000 square feet, including 48 breakout rooms and two 25,000-square-foot ballrooms, each of which holds 2,700 theater-style or 2,100 for a standing reception. Two highlights are the 33rd-floor meeting space and the American Book Company building. The former, which accommodates as many as 200 standing or 150 seated, boasts 180-degree views of Chicago and Lake Michigan. A historic 1912 structure that’s seamlessly connected to the modern hotel, the latter is home to 29 meeting rooms of various sizes, as well as centralized lounges where meeting attendees will find soft seating and places to charge their devices. 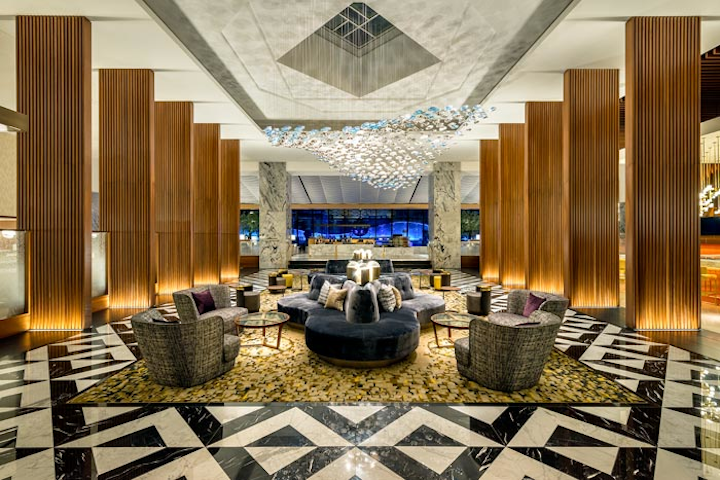 The Ritz-Carlton, Chicago unveiled a multimillion-dollar renovation in July. The hotel has some 25,000 square feet of event space, including a 14,000-square-foot ballroom. Billed as the largest luxury ballroom in Chicago, it can hold receptions for 600. There's also a new 3,500-square-foot ballroom called St. Clair, which holds receptions for 220 guests. The hotel's new restaurant, Torali Italian—Steak, has two private dining rooms: Ventoso, which seats 40 for dinner, and Levante, which seats 16 for dinner. 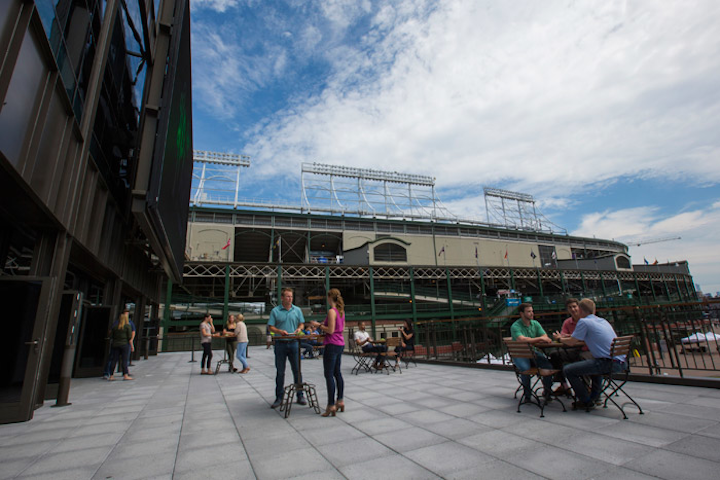 Business meets baseball at American Airlines Conference Center, a new meeting venue that opened in May adjacent to Wrigley Field. A venture owned by the Ricketts family, which owns the Chicago Cubs, it totals 5,300 square feet and holds as many as 300 for receptions. A mix of baseball and aviation history, the venue’s design pays homage to both the Cubs and the team’s exclusive airline sponsor, American Airlines. The former are celebrated at the main entrance, which features artifacts like the original ivy stake from when ivy was first planted at Wrigley Field in 1937. The latter is paid tribute in the venue’s four meeting spaces, each of which features black-and-white photographs of influential people in history who flew American Airlines. In particular, check out the Home Plate Room, which has an outdoor terrace overlooking the Park at Wrigley plaza—home to a seasonal ice-skating rink in winter. Catering comes courtesy of Levy Restaurants, whose offerings range from ballpark fare like a “Make Your Own Chicago Dog” station to more refined choices like fresh tuna tartare. 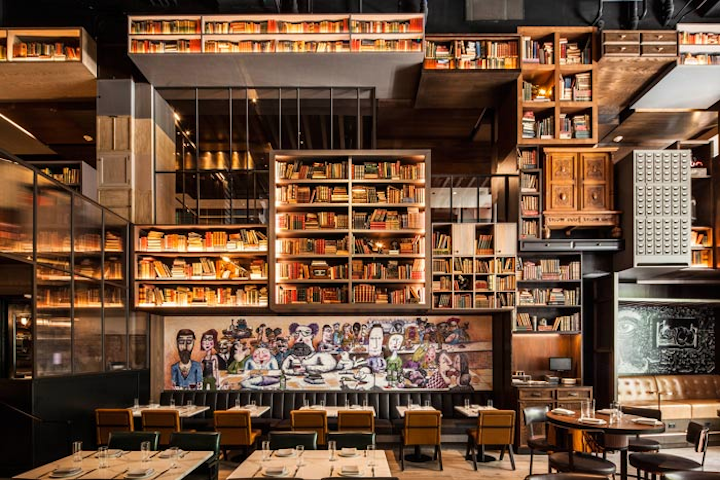 Hotel EMC2 opened in Streeterville in May. The 21-story hotel has 195 rooms, and a design scheme inspired by art and science. Artwork from local artists spruces up the public spaces, while guest rooms pay subtle homage to 1920s laboratories. (The freestanding bathrooms, for example, reference wet labs.) Decked with vintage science books, the hotel's restaurant, the Albert, has 120 seats including a chef's table that seats 20. The eatery serves seasonal, globally inspired fare, and a major design feature is a custom glass structure called "the infusary," which pours house-infused liquors. The hotel's 2,000 square feet of meeting space includes two meeting and event rooms, each decked with blackboard-style art installations. The 812-square-foot Emmy Noether room, named after the famous mathematician, holds conferences for 22 or receptions for 50. The 988-square-foot Symmetry Room holds conferences for 28 or receptions for 75. There's also a 690-square-foot terrace, which holds receptions for 35. 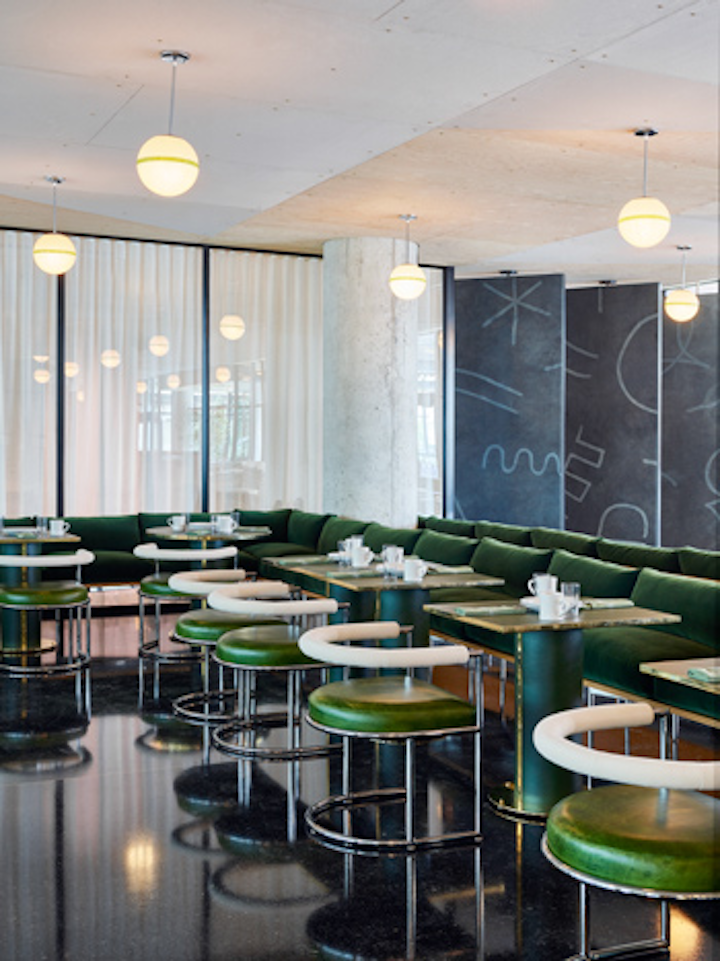 A former cheese factory in the Fulton Market is now Ace Hotel Chicago, a design-forward hotel that combines the West Loop’s signature industrialism with the modernist design tradition of beloved Chicago architect Mies van der Rohe, whose New Bauhaus school celebrated simple, utilitarian forms. Designed by Los Angeles-based design studio Commune, the property boasts clean lines dressed up with simple colors and organic materials, including hand-woven textiles, natural leather, wools, and linens. Along with built-in plywood and linoleum furnishings, each guest room features a unique piece of art made by a student of the School of the Art Institute of Chicago using Ace Hotel Chicago stationery. Atop the building is Waydown, a rooftop bar and lounge that is one of two on-premise food-and-beverage outlets. The other, the hotel’s signature restaurant, is City Mouse, whose specialty is handmade pastas. In addition to City Mouse—which has a private dining room that seats 15, but is not available for group buyouts—the property has six private and semiprivate meeting and event spaces: Waydown West, which accommodates as many as 70; Form, which accommodates as many as 110 sitting or 150 standing; Function, which accommodates as many as 70 sitting or 100 standing; Prairie, which holds as many as 180 sitting or 300 standing; Mahoney, which holds as many as 150 sitting or 200 standing; and Gallery, which seats 30 or holds 130 for receptions. 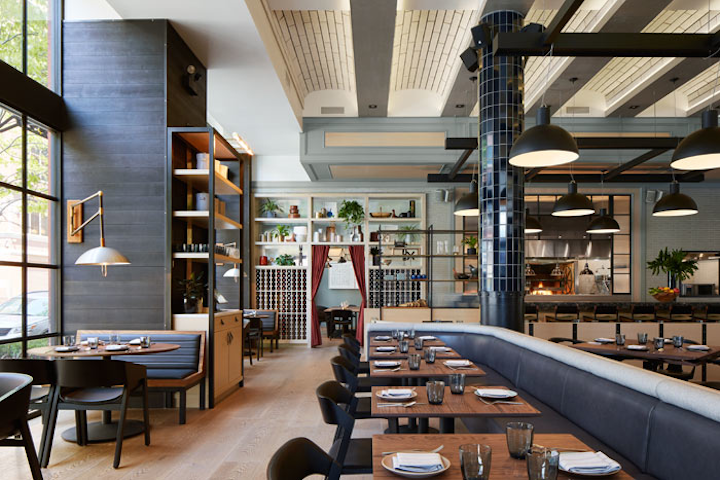 Proxi opened in the West Loop in June. The restaurant is housed in a former print shop, and its design was inspired by a mid-century American brasserie. It serves dishes inspired by global street fare, with menu items varying from coal-roasted oysters to raw tuna with coconut milk and avocado mousse. Proxi's intimate private dining room seats 14, while its main dining room hosts semiprivate seated dinners for 24. 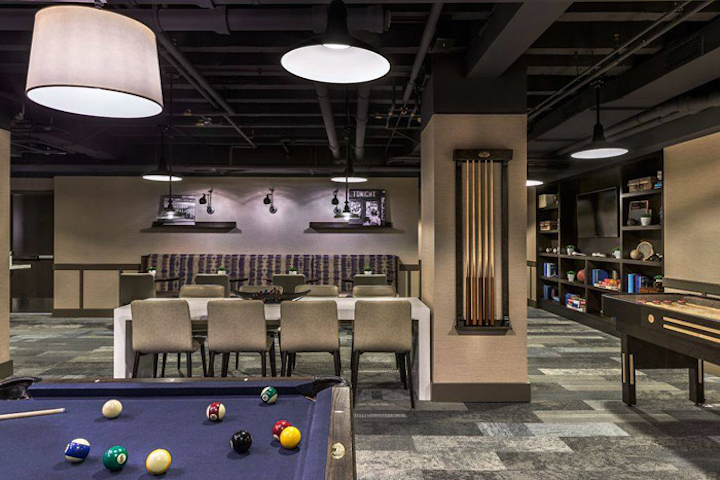 At the historic Ford Center for the Performing Arts Oriental Theatre, the show doesn’t merely go on; it goes upstairs. That’s where the 199-room Cambria Hotel Chicago Loop—Theatre District opened in May. The Cambria brand’s first adaptive re-use hotel, the property rises 22 stories above the ground-floor theater, which originally was built in 1926 as a Prohibition-era movie palace with offices above it. Today, the building’s original character remains visible thanks to design firm Chipman Design Architecture, whose design pairs historical aspects of the building with a new, ultra-modern interior, a highlight of which is artwork that pays homage to Chicago’s history and performing arts culture. Along with a fitness center and a full-service restaurant and a bar, the hotel has more than 2,100 square feet of meeting space and 90 square feet of private pre-function space overall. It has four meeting rooms: a seven-seat boardroom; two meeting rooms that each hold 69 for a reception or 65 theater-style; a slightly smaller meeting room that holds 67 people for a reception or 63 people theater-style. There’s also a game room with billiards, foosball, shuffleboard, and board games that’s available for group buyouts with a reception capacity of 75 guests. 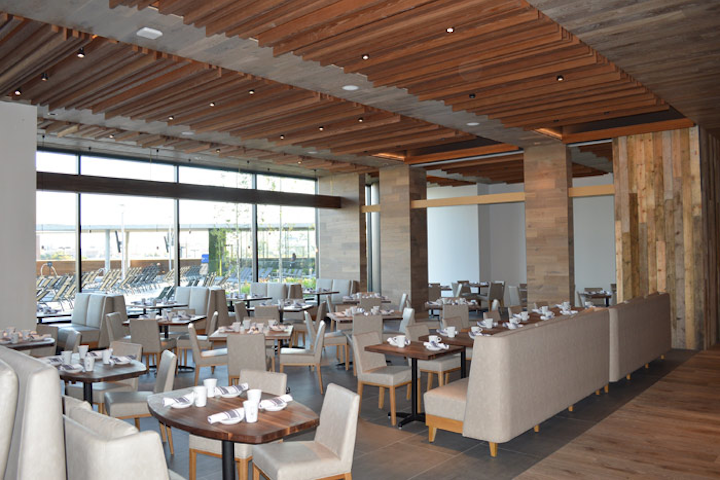 For nearly 50 years, the Midtown Tennis Club in Bucktown has been one of the world’s largest indoor tennis properties. Now, thanks to an $80 million transformation and expansion designed by DMAC Architecture, it’s also Chicago’s first urban sports resort. Now known as Midtown Athletic Club Chicago, the six-story club features indoor and outdoor swimming pools, a warm yoga studio, a 60-bike spinning studio, a group exercise theater, a 10,000-square-foot cardio fitness floor, a 40-yard indoor sports field, a full-service spa and hair salon, a men’s barber shop, and 16 indoor tennis courts, plus a chef-led restaurant and a boutique hotel. The hotel, The Hotel at Midtown, has 55 rooms—including a suite designed by tennis superstar Venus Williams, who also designed the club’s tennis lounge—and five meeting spaces: two meeting rooms that each accommodate as many as 40 seated or 55 standing; the Boardroom, for as many as 12 seated; the Outfield, for as many as 250 standing; and the Theater, for as many as 120 seated or 175 standing. The restaurant, Chromium, offers private dining for as many as 18 seated. The property debuted this fall. 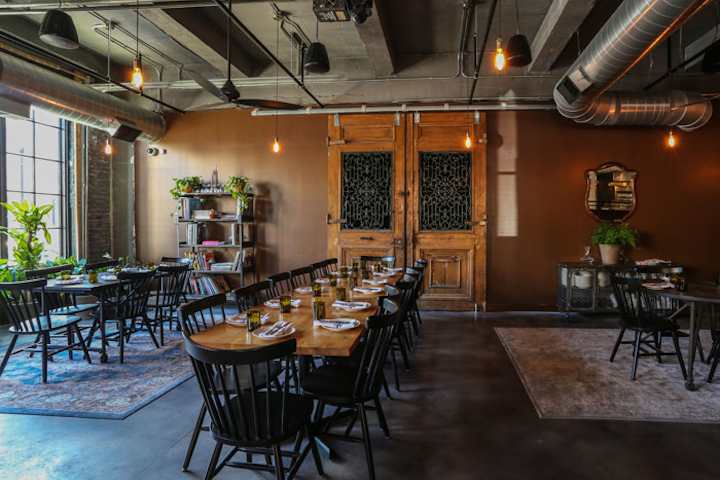 In June, Split-Rail opened in a former donut factory in West Town. With iron doors, oriental rugs, and American art sourced from a local pawn shop, the cozy dining room seats 60. A metal bar has an additional 15 seats; a private dining space seats 30. The restaurant serves childhood classics with a modern twist—think loaded-baked-potato gnocchi, and chicken nuggets with house-made honey-mustard. Staffers are also able to customize menus for vegans, vegetarians, and gluten-free diners; the restaurant is entirely nut-free. 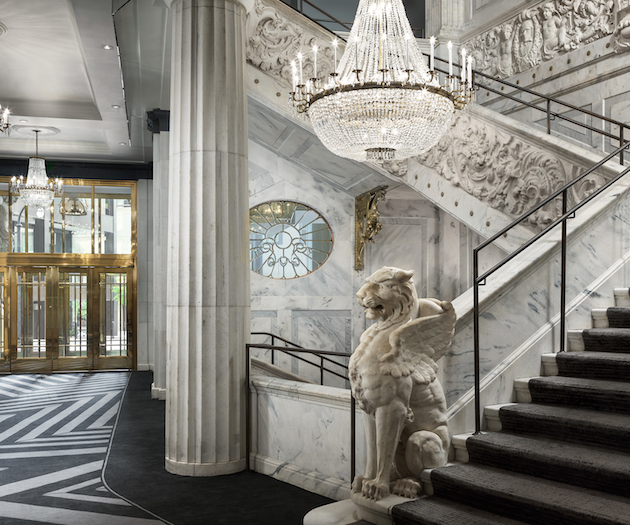 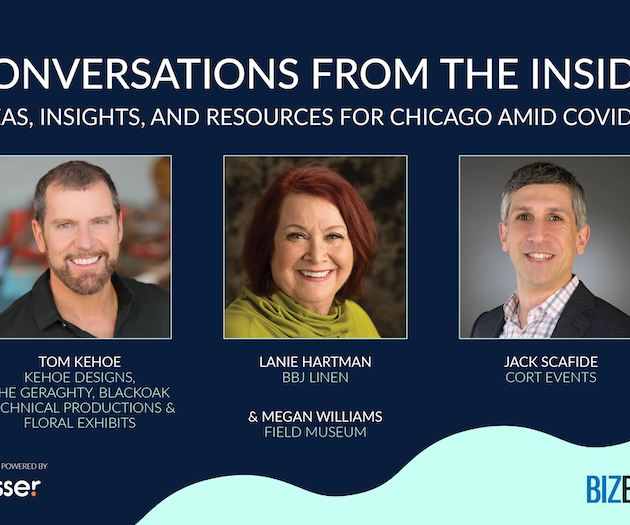 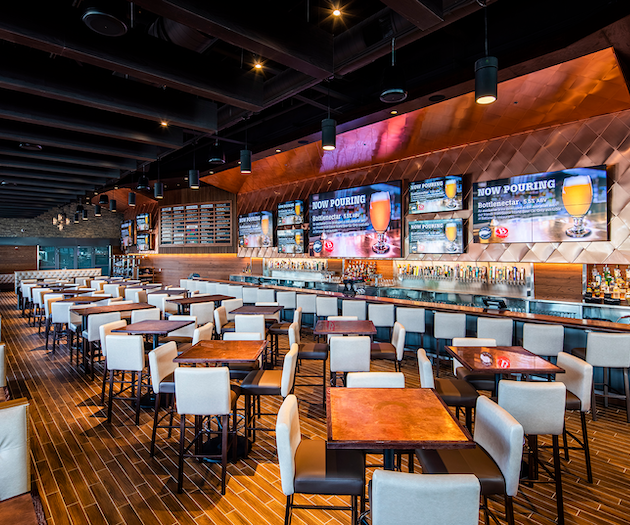 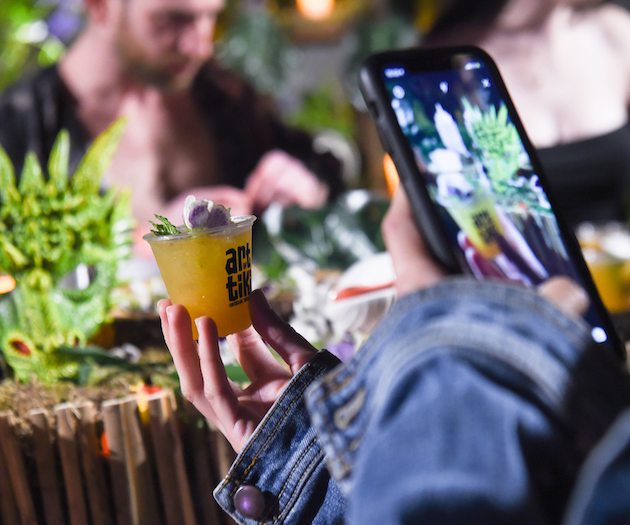