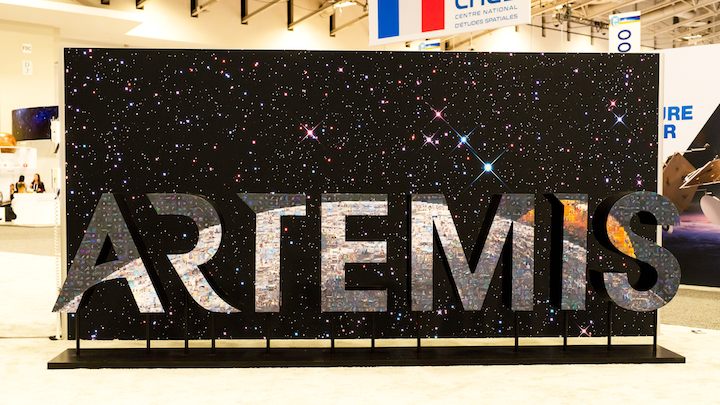 The 15-foot sculpture, which depicts the Artemis logo, has thousands of user-generated photos. Participants posted their photos on Instagram and Twitter using a designated hashtag, and Luster technology color-matched the images and identified where they should be placed on the sculpture.
Photo: Mantas Kubilinskas for Luster

WASHINGTON—There's no denying that the Apollo 11 spaceflight, which sent the first humans to the moon in 1969, was one of the country's most significant cultural moments. NASA hopes to re-create some of that excitement with Artemis, the new lunar exploration program that plans to send the next man—and, notably, the first woman—to the moon by 2024. The information the astronauts gather is intended to make way for the first mission to Mars.

To help celebrate these ambitious goals, NASA hosted a crowd-sourced activation at last week's International Astronautical Congress, which ran from October 21 to 25 at the Walter E. Washington Convention Center in Washington. The 15-foot-long sculpture depicted the Artemis logo composed of 3,000 user-generated photos that had been submitted in person and through Instagram and Twitter. 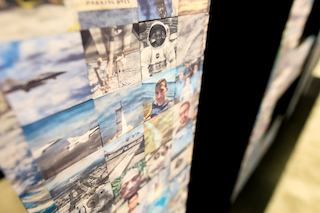 While the majority of the 3,000 images on the sculpture came from social media posts, Luster pulled from NASA's library of space images to fill in certain color blanks.Photo: Mantas Kubilinskas for Luster

The idea was to make everyone feel like they're a part of the "Artemis Generation," according to Derek Wang, NASA's public outreach manager. “[We invited] real people from the Artemis Generation to submit their selfies to our exhibit and show their support for NASA’s exploration plans. By being a part of our art sculpture, we hope individuals will be inspired to follow along as we move forward to the moon and Mars," he explained.

To create the sculpture, NASA partnered with Luster, a New York-based technology company that creates hashtag printers for events. (Its co-founder and C.E.O., Michael Lipton, was recently named to BizBash's list of the Top 1,000 People in the U.S. Event Industry.) The activation marked the debut of Luster's Mosaic Sculptures, which are life-size art installations created from hashtagged social-media posts. For the Artemis activation, for example, Luster's technology pulled social media posts that used the hashtag #NASAExhibit.

The 3-D sculptures are created in real time; Luster's technology color matches the image and identifies where it should be placed on the sculpture. Images are printed on-site, and guests can place the images themselves. "We're thrilled to create the very first Mosaic Sculpture for NASA, an organization that inspires us to push boundaries and reimagine what's possible," said Lipton in a press release. "The beauty of this artwork is that it takes shape in real time, evolving as each image is being posted. It demonstrates how individual contributions can form a collective masterpiece."

Now that the conference has wrapped, the sculpture will be used for various NASA-related events around the country. First up: NASA Day, taking place at the University of North Carolina, Chapel Hill, on November 7. 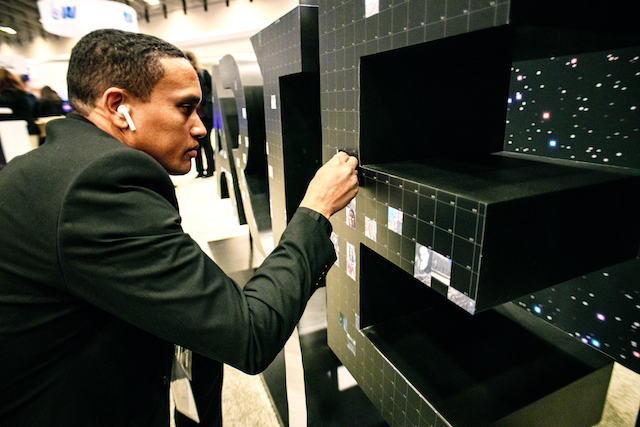 Images were printed on site, and event guests applied them to the sculpture.Photo: Mantas Kubilinskas for Luster