Lollapalooza 2019: Inside Guest-Focused Brand Activations from Brands Like Pepsi and Cupcake Winery

From air-conditioned lounges to digital artwork to festival-friendly swag, here's how brands engaged fans at the Chicago music festival.

CHICAGO—Juggernaut music festival Lollapalooza returned to Chicago's Grant Park August 1 to 4. The festival saw mercifully mild weather compared to the heavy rains and searingly high temperatures festivalgoers had experienced in previous years. But in the immediate aftermath of the Gilroy Garlic Festival shooting—and amid two more mass shootings that took place in El Paso, Texas, and Dayton, Ohio, over the weekend—organizers made an effort to step up security. As such, the police presence was more robust than ever before.

Other aspects of the festival continued as normal, from a musical lineup that included the likes of Kacey Musgraves and Ariana Grande to sponsor activations that focused on providing guest perks. Brands such as Toyota and Pepsi wooed music fans with whimsical tropes such as a pop-up pool party and a rainbow they could lounge in. Other brands offered customized experiences within the festival: Cupcake Winery doled out frozen drinks garnished with guests' foamy self-portraits, for example. Meanwhile, American Eagle led visitors to different "mood rooms" based on their responses to a music-theme question. Keep scrolling to see how these brands and more grabbed music fans' attention on the mile-long festival grounds. 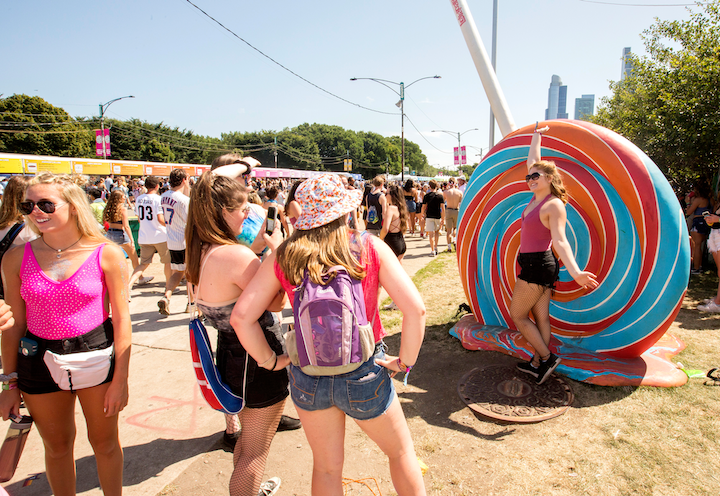 The sprawling festival took over one mile of Grant Park from end to end. Along with music stages and sponsor activations, attractions included photo ops in front of props like a giant replica of Lollapalooza's unofficial mascot: a swirly lollipop.
Photo: Barry Brecheisen for BizBash 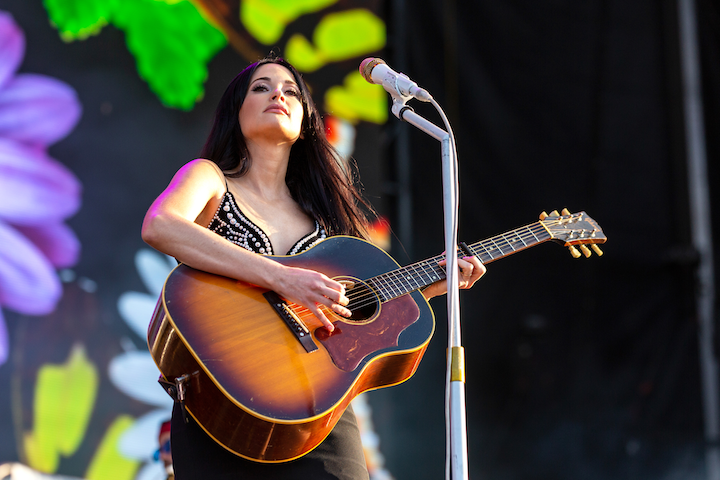 With eight main stages, the fest presented sets from more than 170 bands. "Rainbow" singer Kacey Musgraves (pictured) was among the performers, and paused her show to lead a moving chant that called for an end to gun violence. Ariana Grande, Childish Gambino, and Tame Impala were other popular acts.
Photo: Barry Brecheisen for BizBash 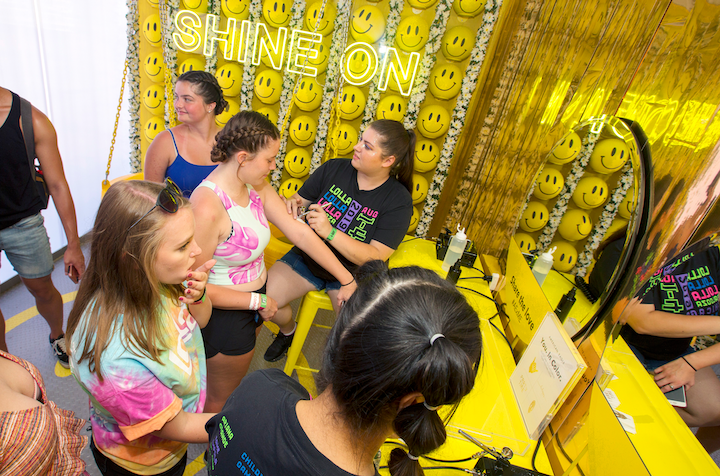 Guests at the American Eagle activation were asked: "How does music make you feel?" Based on their responses, guests were led to one of several different "mood rooms." Each room had a different color theme and offered fanny packs and temporary tattoo applications. Throughout the weekend, the activation also hosted aura readings and performances.
Photo: Barry Brecheisen for BizBash 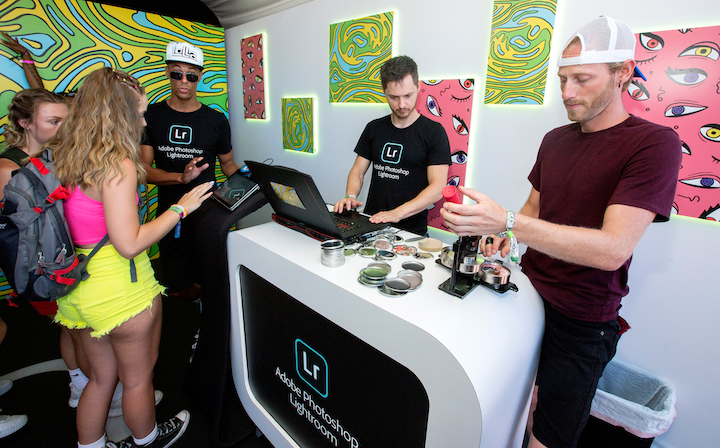 Lollapalooza was the first stop in the Adobe Creative Tour, which was produced in partnership with Live Nation. The activation—which will also pop up at festivals such as Sea.Hear.Now in New Jersey and Voodoo Music & Arts Experience in New Orleans—allows festivalgoers to experiment with three Adobe apps. Using Lightroom, Premiere Rush, or Adobe Spark, visitors could create digital artwork. An onsite gallery also showcased the work of other app users.
Photo: Barry Brecheisen for BizBash 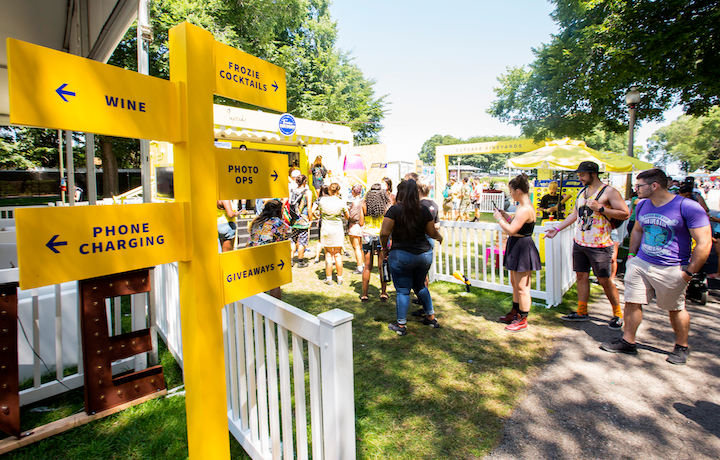 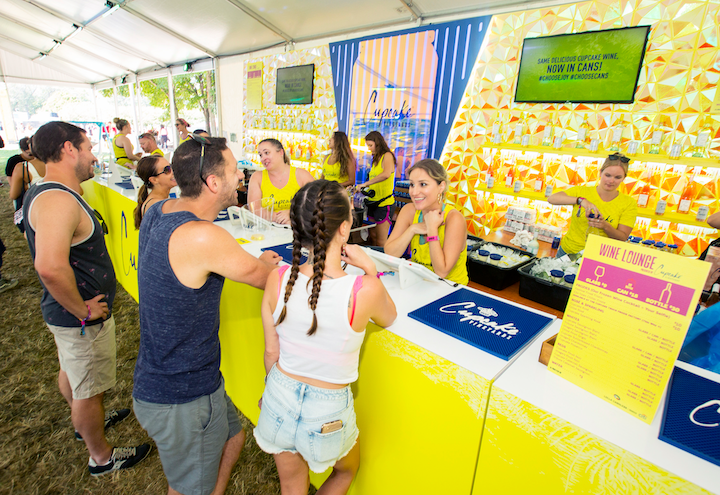 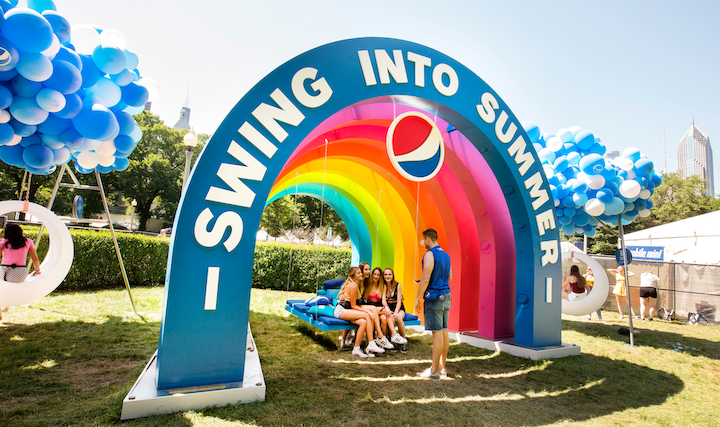 In the so-called "Pepsi Grove," guests could pose for photos (and grab some shade) under a giant prop rainbow. They could also swing under cloud-shaped balloons.
Photo: Barry Brecheisen for BizBash 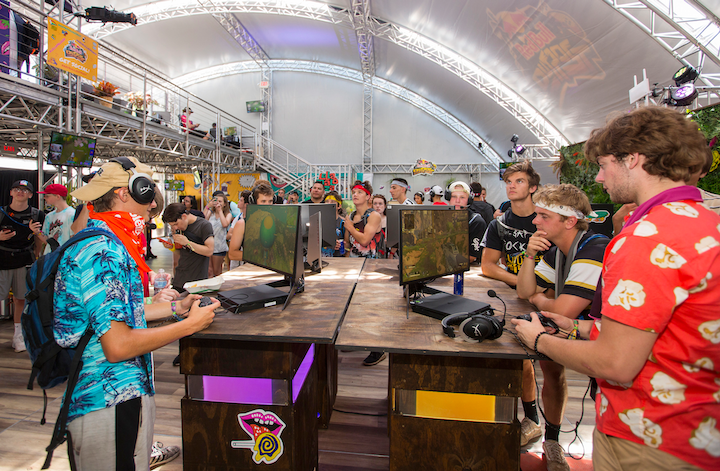 The new Redbull Outpost drew in game fanatics by featuring famous gamers such as Ninja competing against Lollapalooza artists. Guests also could play games themselves within the two-story, air-conditioned tent.
Photo: Barry Brecheisen for BizBash 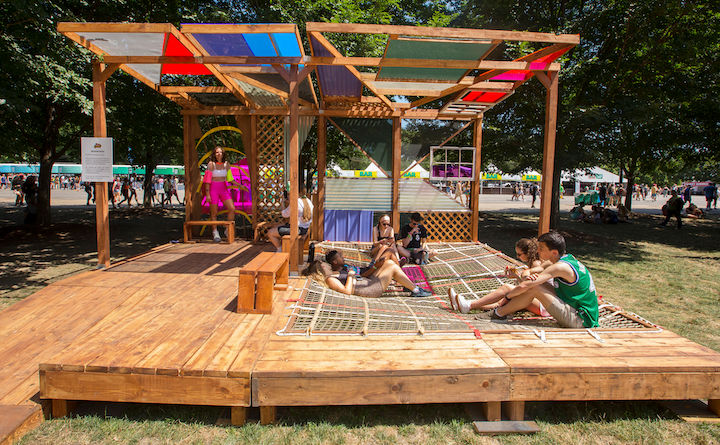 The energy drink also brought in a lounge area for festivalgoers to relax in between sets, which included a trampoline-like area for relaxed seating. There was a bar selling Red-Bull-infused cocktails nearby.
Photo: Barry Brecheisen for BizBash 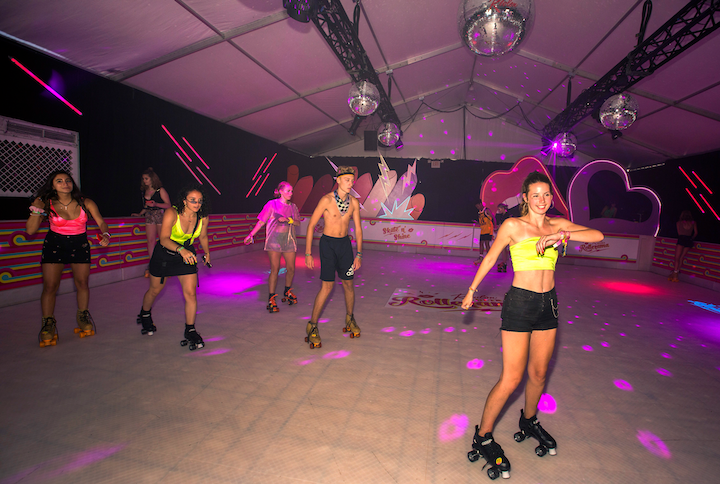 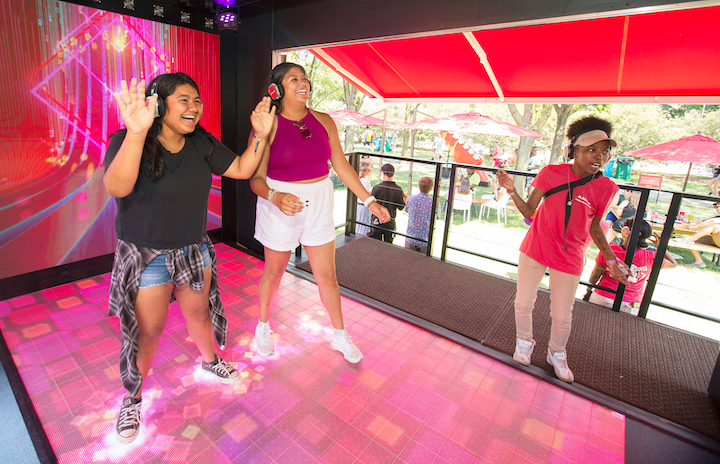 State Farm hosted the "Neighborhood of Good" experience. Each time visitors sang, danced, or listened the music, the action converted to currency. At the end of the festival, the grand total was donated to Notes for Notes, which supports music education.
Photo: Barry Brecheisen for BizBash 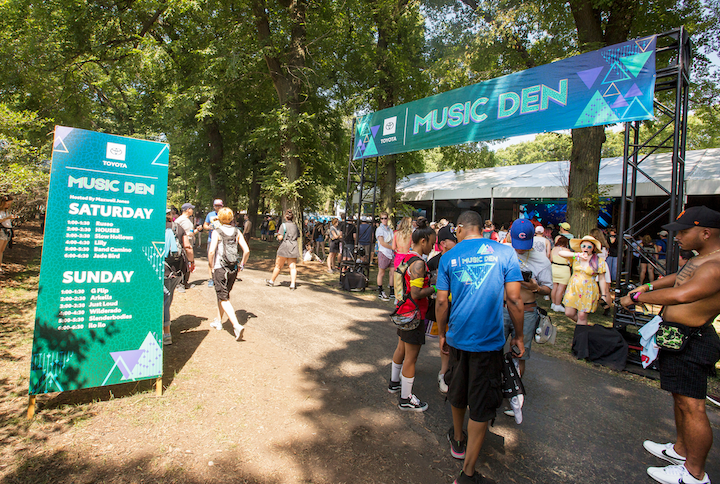 At Toyota's Music Den, guests could catch intimate performances from rising acts. They could also pick up glow-in-the-dark bandanas and grab treats at a candy bar.
Photo: Barry Brecheisen for BizBash 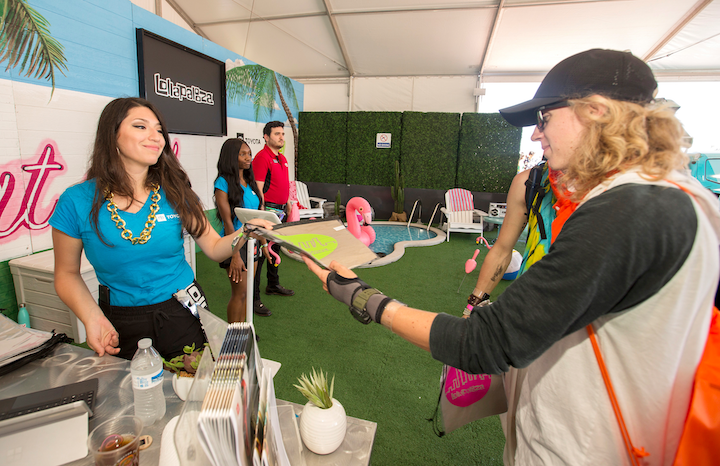 Toyota also hosted Paradise Park. In the palm-tree-studded space, staffers doled out silkscreened totes, and a prop pool provided a summery photo backdrop. There were also snacks from a taco truck.
Photo: Barry Brecheisen for BizBash 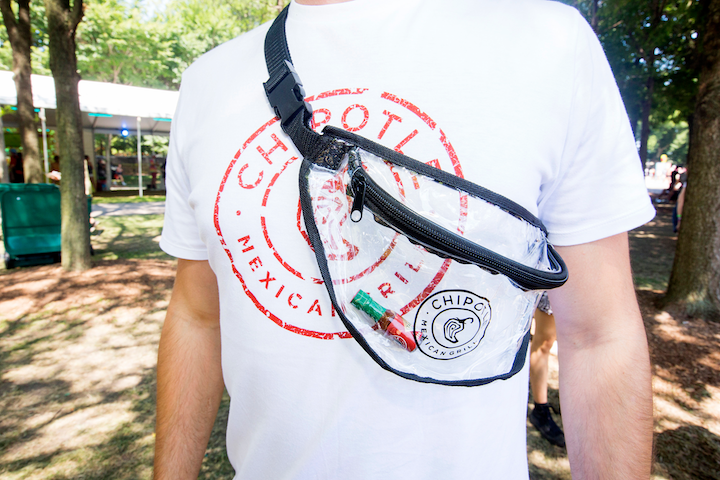 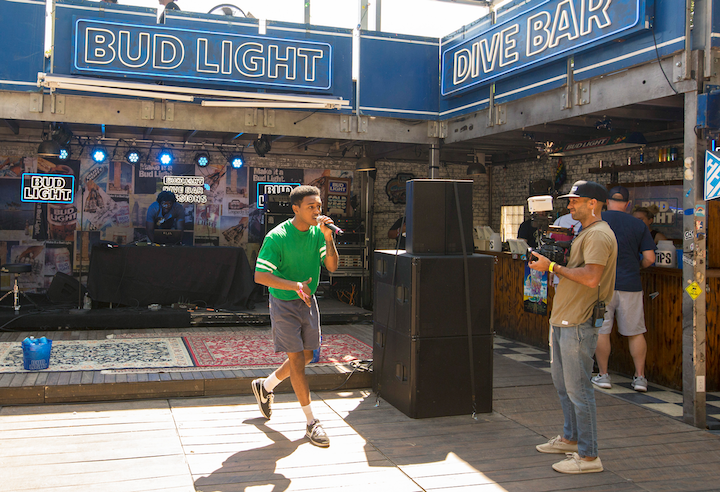 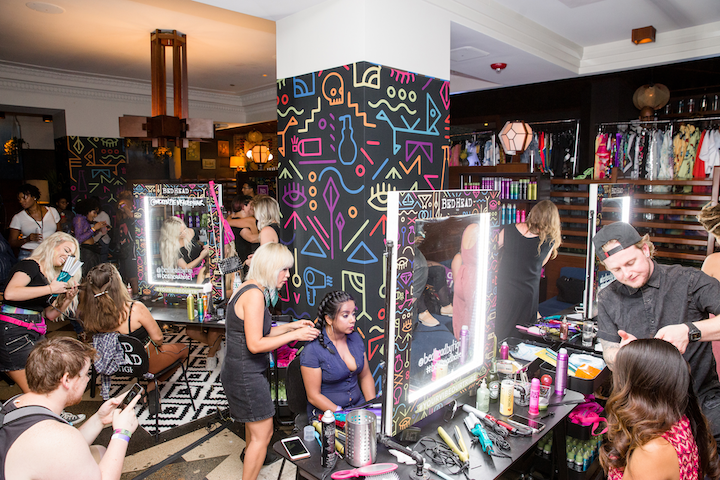 Offsite, Bedhead partnered with Entertainment3Sixty to take over the Freehand Hotel. Each hotel room was plied with branded goods including fanny packs and door hangers. In the lobby on August 2 and 3, visitors could get free festival-inspired hairstyling from Bedhead reps. Nearby, artists from Lemonhead.LA painted guests' faces with glittery makeup.
Photo: Jennifer Catherine Photography
More in Experiential, Activations & Sponsorships