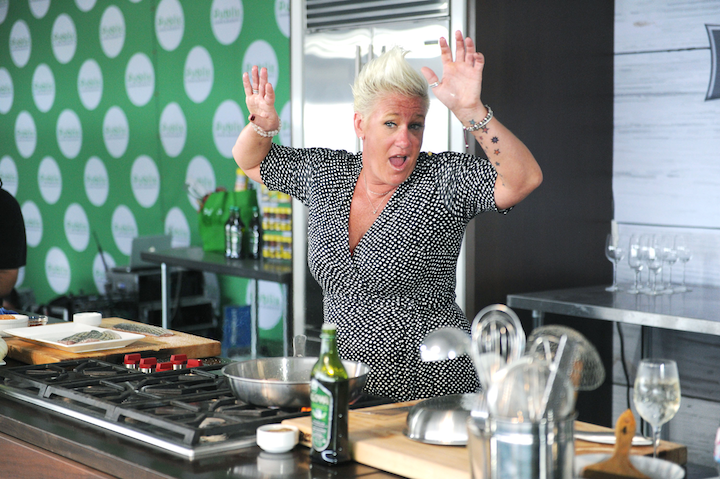 Chef Anne Burrell is among the Food Network talent returning to the South Beach Wine & Food Festival. She will host a dinner with chef Scott Conant at his Scarpetta restaurant as well as appear at the Grand Tasting Village.
Photo: Seth Browarnik/WorldRedEye.com

MIAMI/SOUTH FLORIDA—Approaching its 19th installment, the Food Network & Cooking Channel South Beach Wine & Food Festival continues to reinvent and refine itself. “Our goals are to keep the festival fresh, while creating awareness for both the hospitality and culinary industries in Florida,” says festival director Lee Brian Schrager. “We always want to be one step ahead of everybody else with the diversity and programming that we offer.”

The festival, presented by Capital One, kicks off February 19 to 23, with more than 100 events scheduled for more than 65,000 attendees, including a steady roster of signature favorites, intimate dinners, and expansions in kid-friendly programming, cocktail-driven events, and more. BizBash chatted with Schrager to learn what's new for this year and what drove his festival programming decisions.

A New City Partnership
This year, the festival will expand into Hallandale Beach, just across the county line from Miami-Dade into Broward. Although branded as part of the returning Crave Greater Fort Lauderdale Series, this is the first time Hallandale Beach will serve as a host city. Three events will debut there, including the Friday and Saturday Movie Night in the Park, hosted by Jacques Torres and Valerie Bertinelli, respectively. “The city of Hallandale reached out to us to do programming, and we went to take a look,” says Schrager. “They already do movie nights [there], and we loved the space.” The events will cater to attendees of all ages with food trucks and beverages included in the ticket cost ($25 for adults and $10 for children).

Also on Saturday is the Hallandale Beach Food & Groove: A Wine, Food and Art Experience at the Village at Gulfstream Pegasus Park, featuring bites from 20 local food vendors. “The event will focus on the great talent of Hallandale,” Schrager says. “There’s a world of people [in South Florida] who don’t want to fight the traffic and come to South Beach, so why not create a brand-new event for them, and a brand-new event for us?”

More Kid-Driven Programming
“We’ve had an overwhelming request from kids, families, parents, and grandparents,” says Schrager on his decision to expand kid-friendly events this year. The Eden Roc will host the first Kids Pizza-Making Master Classes on Saturday and Sunday afternoons. Also new this year is child entry into the dog-friendly Nulo Pet Food’s Yappie Hour event at Loews Miami Beach (which also hosts Sunday’s Family Ice Cream Social). Goya Foods’ Fun and Fit as a Family will present new programming and culinary demos. “Fun and Fit just continues to get bigger and bigger, and we keep enhancing the experience for families that come back year after year,” Schrager says.

Extensive Happy Hour Offerings
This year will offer more wine and spirits events, specifically, happy hour gatherings. Along with long-time favorites Oyster Bash (at Lure Fishbar) and Craft-y Happy Hour (at Mondrian South Beach) attendees can clink glasses at additional events. Miami’s own Dwyane Wade takes over hosting duties from Martha Stewart at the Wine & Cheese Happy Hour, pouring sips from Wade Cellars on Saturday at Eden Roc. (The Miami Heat legend also showcased his wines at the 2019 Food & Wine Classic in Aspen in June). Wade will be in town to retire his Miami Heat jersey, which was “great timing,” according to Schrager, and will also host a dinner with Alex Guarnaschelli Thursday night at the Ritz-Carlton, Bal-Harbour.

In addition, Adam Richman hosts the first installment of Sips & Dips on Saturday at the 1 Hotel South Beach. “Adam asked me if I would consider it, and I loved the name—I’m all about a good name,” Schrager says. “It was his concept. Sometimes, you have a new event, and it takes a year or two to catch on, but not this one.”

For bubbly enthusiasts, Champagne Pommery will present Bubbles & Bites Happy Hour at the Betsy hotel rooftop pool deck for a Thursday toast to the festivities.

First-Time Late-Nights With a Local Spin
The after-hours crowd can expect a variety of late-night debuts that spotlight Miami-based talent. On Thursday night, the Naughty Fork’s Samantha Schnur (Miami influencer and co-founder of the user-generated food app HoneySpot) hosts the Chef Mash-Up at Ace Props Miami, where a hive of local chefs will combine their culinary styles. Also Thursday night, Zak Stern’s Gospel & Falafel is the festival’s only kosher event this year, and will serve bites to the tunes of a gospel collective, Min. Desmond Jackson & the Sovereign Ministries, at Stern’s brick-and-mortar location. “I just love the idea of mixing Zak the Baker with a 24-piece gospel band,” says Schrager.

On Friday night, Michael Schwartz hosts Miami Design District Presents Sliced: A Genuine Pizza Party. “He has wanted to do a pizza party for a long time, but it is logistically so challenging to bring pizza ovens in from New York,” Schrager says. “Michael’s got a pizza book coming out and wanted to do this. The Design District agreed to provide support for the ovens, and Michael curated the talent.”

Inventive, Boozy Master Class Pairings
With a dozen master classes inviting students of all ages, new themes with unique pairings will take classes at SGWS Wynwood beyond traditional eats. At Saturday’s Sips & Succulents, guests can upcycle their drink vessels to create a home for a new plant, while Daiquiris & Pastelitos will pair two of Miami’s most popular indulgences, letting attendees craft their own frozen sips followed by an interactive pastry course from Miami’s own Pastelito Papi.

On Sunday, Spike Your Ice: Ice Cream-Making and Spirits provides an inside look at Salt & Straw’s farm-to-cone ice cream process. Company staff will then fuse the flavors with bourbon, whiskey, scotch, and other spirits for ice cream-meets-cocktail treats.

The common theme for these master classes together: booze. “Yes, absolutely, cocktail events do really well for us, and it was a goal of ours to do more cocktail programming aside from walk-arounds,” says Schrager. “We made a concerted effort to come up with not only more, but more interesting class pairings, as well.”