Watch the Yard's inaugural Yard Con offered job opportunities and emotional support to black students, who have been disproportionately affected by the COVID-19 pandemic. 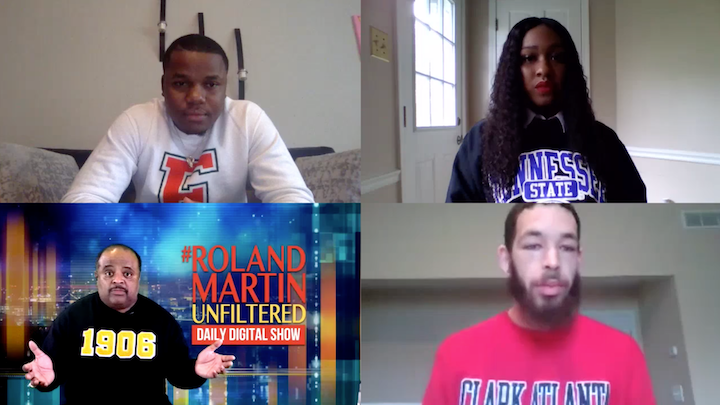 Journalist Roland Martin chatted with student government presidents from historically black colleges and universities (HBCUs) around the country to learn how their student bodies are dealing with the COVID-19 shutdowns. All attendees were encouraged to wear shirts representing their schools.
Photo: Courtesy of Watch the Yard

As the COVID-19 crisis shut down colleges around the country, Watch the Yard, a media company founded in 2014 as a resource for black students and alumni, knew its audience was suffering—both financially and emotionally. "Many of [our readers] are first-generation college students, and graduation is a big deal for them and their parents,” said founder and CEO Jonathan Rabb in an interview with BizBash.

Rabb got together with his team to find a solution—and the inaugural Yard Con was born. The daylong digital conference, held on April 19, wanted to evoke the feeling of a yard show (a beloved tradition in black fraternities and sororities). But more than that, it aimed to provide practical support and resources to black students, and also give the students a space to discuss their fears and anxieties openly. "Our idea was: How can we replicate the feeling of being together in a room?” explained Rabb.

Watch the Yard had previously hosted a few in-person events, including a student-led film festival and a recent on-campus activation with Google. But Yard Con was an entirely new concept—and the media company's first foray into the virtual conference space. Working with SocialSocietyU's Sianni Cabello along with a team of volunteers, Rabb pulled together the event in less than a week using the virtual events platform Hopin.

Ultimately, students left the five-hour gathering with job opportunities, new connections, and a bunch of education and inspiration. Here are six ways the virtual event achieved its goals.

1. It kept pricing low, and stayed authentic by involving its core audience in the planning and promotion.
To organize the event in such a short period of time and to ensure it had value for his audience, Rabb turned to his existing community: college students. "We had these lists of students that we were going to write stories about, so we reached out to all of them and said, 'Who wants to be on our media team?'" Rabb ended up with a team of 75 undergrads around the country, most of whom were interested in PR, marketing, and graphic design—which in turn gave the young adults a way to build up their experience and resumes.

During the planning process, team members were able to attend exclusive PR, creative, and professional development sessions with industry experts. "[For example,] we brought in a PR professional who gave a seminar over Zoom,” Rabb explained. “And then we gave the kids our logo and told them some rules of what they can and can't do, and then just let them run free with the brand." Rabb noted he got around 40 TikTok videos students had made to promote the event, plus a bunch of graphics he used on Watch the Yard's social media.

The entire staff was volunteer-based. "The idea was that many of the students' internships had been canceled, so if we created a big enough thing, a cool enough thing, they could put it on their resumes,” Rabb said. With the students’ help, the event received about 1,000 registrations in the first 24 hours.

Speakers also volunteered their time, so the only cost for the event was the streaming platform. Each attendee paid $2 for their ticket, which covered Hopin's costs. Rabb noted that having a minimal charge actually helped attendees take the event more seriously—especially because Hopin charges per registration, rather than the number of people who actually attend. "So you want to make sure there's some sort of cost because it makes people invest in it a little bit more," he explained, recognizing that there's a lot of competition for these types of virtual festivals today. "You want them showing up on time and taking it seriously." 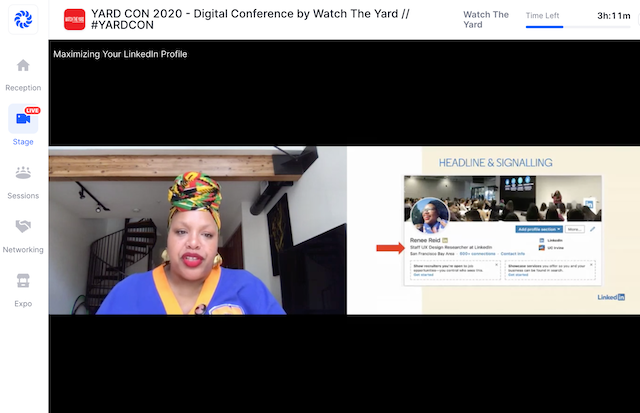 During the main stage programming—which included a resume-building workshop from a representative from LinkedIn—the Hopin platform allowed attendees to easily head over the networking area or learn about different student-run brands in the expo area.Photo: Courtesy of Watch the Yard

2. It built connections that will last beyond the event itself.
One challenge Rabb faced was how to take the virtual gathering beyond just a series of presentations; he wanted the students to make real connections like they would at an in-person event. The solution: Hopin's built-in chat function and networking feature.

Throughout the day, students could interact with one another in the chat, where they were encouraged to discuss their schools and majors and open up about how they’ve been affected. Students also regularly shared links to their LinkedIn profiles and other social media information. (By the end of the five-hour event, one student posted that he’d received 45 LinkedIn connections that day.)

Hopin also provided a built-in networking function, where students were randomly matched up with another conference attendee for a three-minute video chat. They were all encouraged to wear shirts that represented their schools, to foster an immediate conversation topic. In the networking area, students also had the chance to be connected with black therapists from the Black Mental Health Alliance, who performed mini wellness checks on the attendees. "A lot of these kids have never talked to a therapist before," noted Rabb. "We also had employees from LinkedIn in there, just popping up and talking to the students about their careers and jobs."

3. Its speaker lineup and sponsor activations offered tangible takeaways for the audience.
Rabb and his team thought carefully about the mix of programming, which ranged from resume-building and LinkedIn workshops, to how-to sessions on creating side hustles and becoming on-campus promoters, to talks from student government presidents and black fraternity and sorority leaders. "We told the panelists, 'If you're coming in here, everything you're talking about is going to be directed toward the students,'” said Rabb. “They weren't talking to our students unless they had a job, an internship, or advice to give away."

The same guidelines were given to the conference’s sponsors, who included the U.S. Census. A representative from the census discussed why it’s crucial for the black community to be counted, and also shared open job opportunities at the government agency. “The students were really excited about that,” noted Rabb.

Meanwhile, members of LinkedIn's employee base personally donated more than 100 LinkedIn premium subscriptions to be raffled to the attendees, and sponsors Forbes8 and iCON offered virtual internships and celebrity mentorship opportunities with the likes of NBA veteran David West and producers who have worked with Lizzo. “Honestly, it was like when Oprah did those giveaways,” laughed Rabb. “That's the vibe that we were going for the whole time.”

Watch the Yard founder Jonathan Rabb (left) chatted with a representative from the U.S. Census, who shared open job opportunities and discussed why it's crucial for the black community to be counted.Photo: Courtesy of Watch the Yard

4. It injected moments of fun.
Like any daylong conference, a virtual event needs moments of levity to let your audience decompress—and to drum up those social media posts, of course. Yard Con, for example, started with a gospel-theme set from a student DJ, followed by a guided group prayer. (It was a Sunday, after all.) At the end of the day was a special live performance from hip-hop group Fast Life Yungstaz, creators of the “Swag Surfin'” song and dance that has become a staple at black fraternity and sorority events. Attendees were encouraged to grab their phones and take videos of the screen, which were shared on Watch the Yard’s Instagram.

5. It encouraged people to get real.
More than anything in the time of social distancing, people want to feel connected. It’s okay if the technology isn’t perfect—keep people informed through a chat function, and be honest about it, suggested Rabb. "Some of the transitions were rough, but people said they actually liked that. They liked the live-ness of it," he said.

Throughout the day, representatives from Watch the Yard were active in the chat to answer questions, facilitate connections, and encourage students to share how they were feeling.Photo: Courtesy of Watch the Yard

Throughout the day, speakers and attendees were encouraged to be honest with how they’re feeling and how they’ve been spending their days. Rabb noted that virtual events are actually an optimal way to engage Gen Z, which is craving interaction and resources right now. "Social distancing is really changing the fabric and the DNA of how young people interact right now,” he said. “This is a very important time in their lives, and they're not able to be in the same room with each other. And so their coping mechanisms are different. The ways that they deal with stress is different. They're more open to talking about how they feel and being vulnerable with each other online."

6. It's looking to build on the concept.
Like with any conference, keeping this newfound community engaged in the future is crucial. Based on the success of Yard Con, Rabb is exploring other ideas for virtual events. And once the COVID-19 crisis subsides, he hopes to bring Yard Con to college campuses around the country.

Rabb noted that a low-cost virtual event ended up being a great way for him to test and refine this new event concept. "This quarantine has equalized the events space," he said, explaining that despite Watch the Yard’s relatively small budget at the moment, “We were able to introduce the program to 2,000 people, and have them interact with the event brand—and then we can activate in person when the quarantine ends.”

Rabb also noted that now is an optimal time to reach out to more high-profile guests—such as sports stars and influencers—who might have more time on their hands. "So now when we need to go out and get investors and sponsors, we have this [virtual event] as proof of concept,” he said. “They now know what we can do online—and they're going to be excited to see what we're able to do once we can shake hands with each other."