Occasions Catering in Denver celebrated its golden anniversary with solid gold dancers, liquid handblown candy, and an ATM dessert machine. It harkens back to a golden era B.C. (Before Coronavirus)—one month ago. 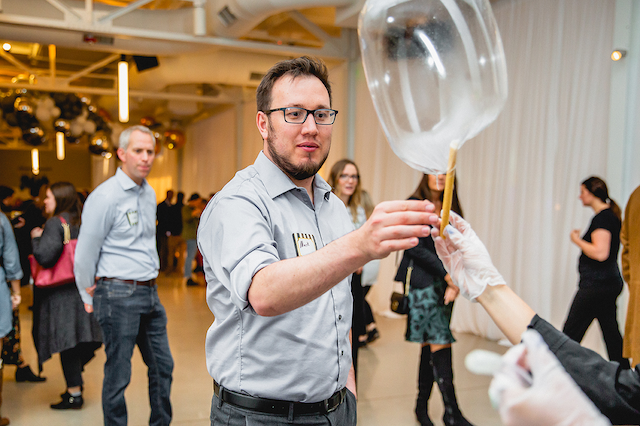 A Custom Look Events set up a station that offered guests edible balloons on a cookie straw.Photo: From the Hip Photo

DENVER—On February 26, 1970, one of the heavy hitters on Denver’s party and event scene opened its doors under the stewardship of catering grand dame Sandy Tenenbaum. She and her chef husband, Barry, eventually passed the business down to their son, David, and co-owner Jeremy Bronson. Fifty years after Tenenbaum launched in her kitchen, Occasions Catering celebrated its anniversary with a 400-person, gold-theme soiree at the newly opened Asterisk space in downtown Denver.

Occasions Catering is known for throwing food-focused events—but not typically for themselves. “Our design story was ‘golden years of the future’ and we wanted a futuristic, modern-sleek. We wanted it to be loud, gold, and celebratory,” said Nate Couture, marketing manager at Occasions Catering. “Asterisk is like a giant box, so we split it down the middle with white pipe and drape. At the beginning of the night, we had lights shining with silhouettes [of dancers] through the curtain on one side of the drape,” Couture shared. The purpose was to create intrigue and a feeling of “What’s going on back there?” Eventually, the dancers started to peek body parts through the drape with simple gestures, inviting guests to come and see what was hidden behind the curtain.

On the other side was a live band and dancers, both from Imprint Entertainment, a Denver DMC that had the dancers dressed in gold spike-clad suits and hanging from the ceiling on a custom cube trapeze. Privé Event Design created all the gilded florals for the event, including the gold palm leaf wall. Also awaiting behind the curtain was a 360-degree slow-motion video photo booth that fit three to four people at a time. Guests were able to text and email themselves the branded videos.

“For food, we paid homage to the last 50 years, but focused on the future and where we’re going, but with twists,” Couture explained. “We served espresso-infused mushroom brisket and a watermelon spoon with grilled togarashi. But we also had a tomahawk carvery and twice-baked potato, which are classic items, but we gave them a new take.”

The catering stalwart partnered with A Custom Look Events, which crafted a cookie straw paired with liquid candy that the chef blew into with helium, creating a candy balloon. To their amusement, guests who partook in the confection found the helium made their voices high-pitched. “It’s hilarious watching people eat it,” Couture said.

Scroll down for a look inside this historic 1920s post office garage that was transformed into a gilt-y affair. 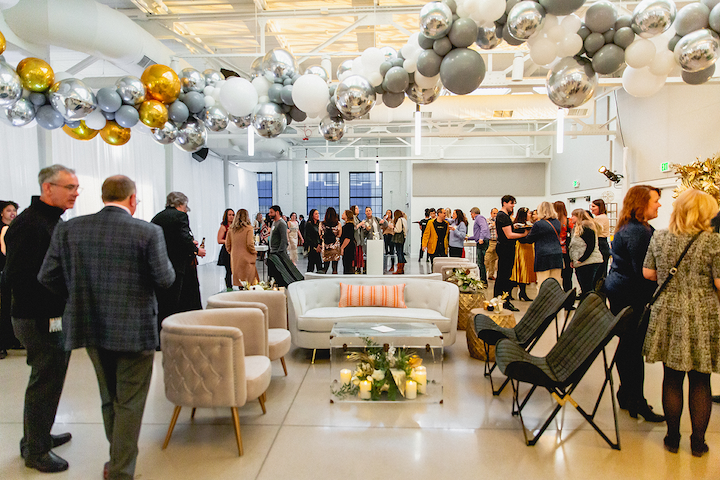 Party Poppers outfitted the event's venue, Asterisk, with white, silver, gold, and metallic balloons as a nod to the "golden years of the future" theme.
Photo: From the Hip Photo 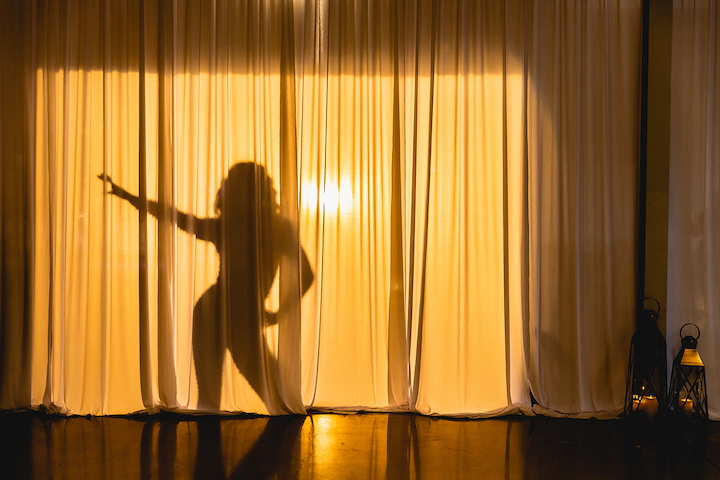 Imprint Entertainment staged dancers and lighting behind a gold curtain to entice guests to walk through the other side and explore the rest of the event's activations.
Photo: From the Hip Photo 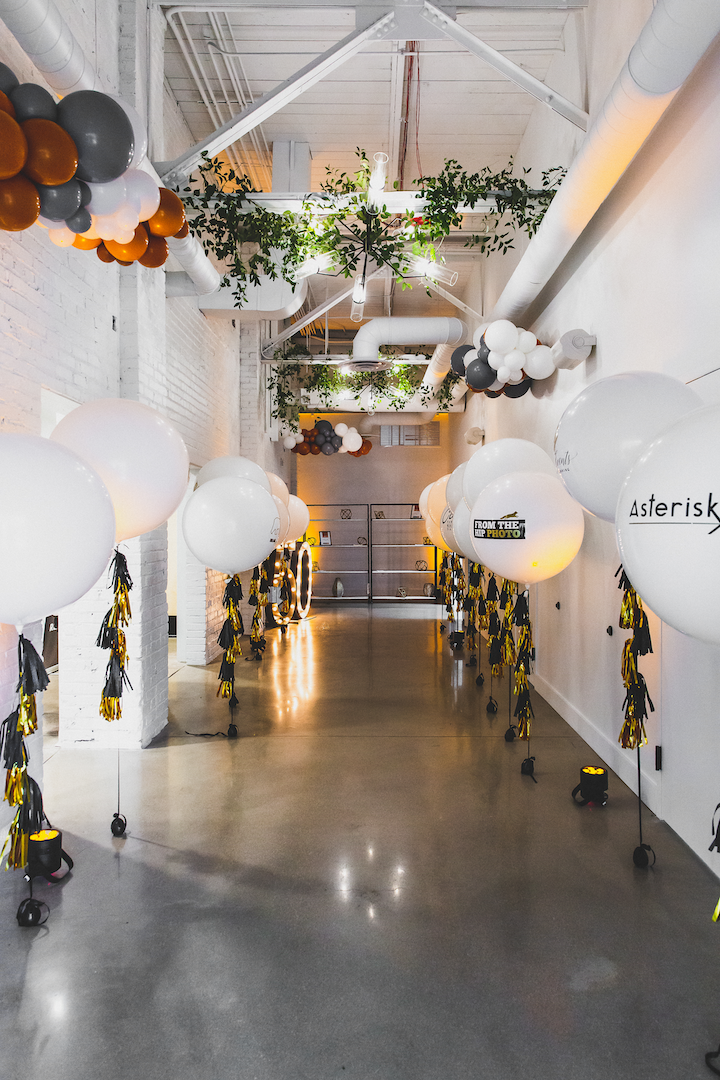 An Instagram-worthy entrance included both branded and gathered balloons, greenery along the ceiling, and oversize marquee numbers that read 50.
Photo: From the Hip Photo 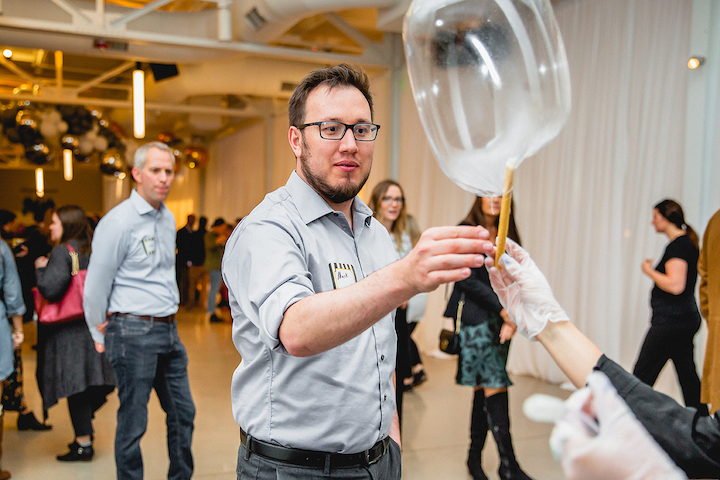 A Custom Look Events set up a station that offered guests edible balloons on a cookie straw.
Photo: From the Hip Photo 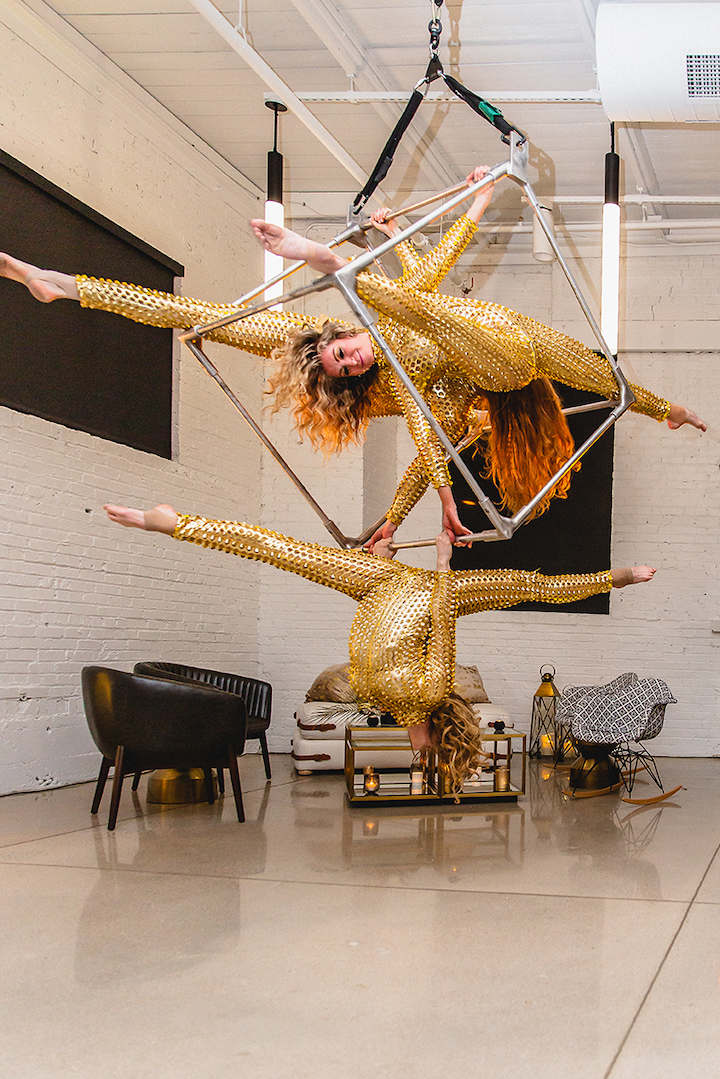 As added entertainment, dancers donning gold spike-clad suits were suspended from the ceiling on a custom cube trapeze.
Photo: From the Hip Photo 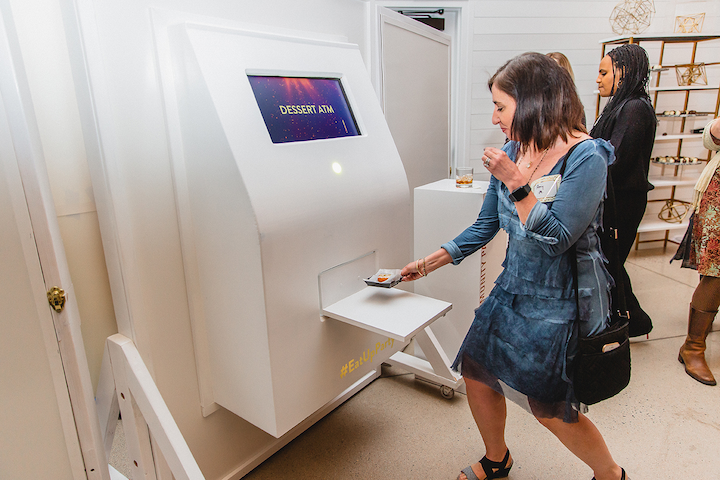 “This was the first time we’ve done a dessert ATM,” said Nate Couture, marketing manager at Occasions Catering. “Now we’ll use it for other things, and you could fit relatively anything in the drawer/tray—it could be a taco ATM in the future!” Event professionals can customize the screen or logo on it for any event. The front and sides of the machine are brandable as well.
Photo: From the Hip Photo 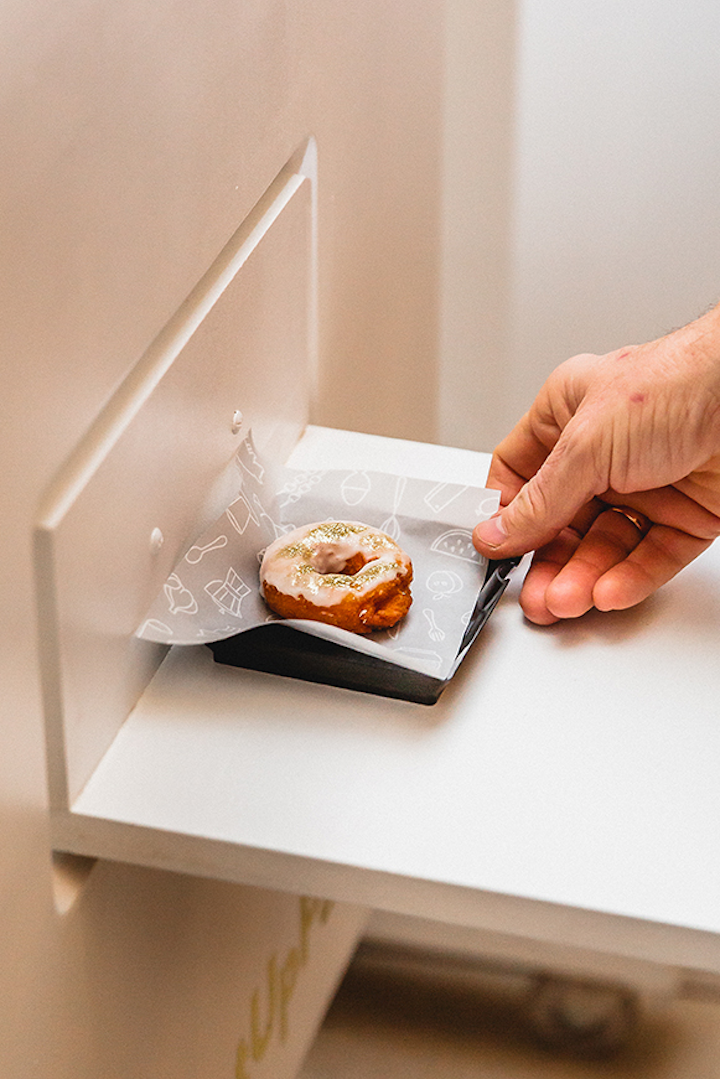 From the dessert ATM—a major hit at the event—guests received desserts such as miniature donuts.
Photo: From the Hip Photo 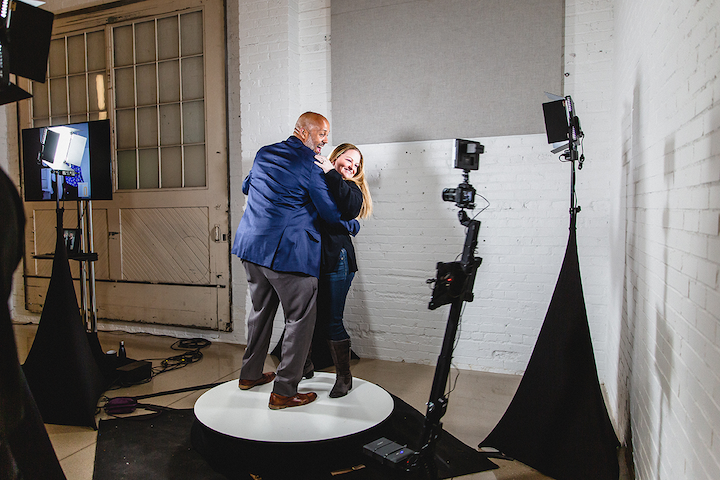 A Custom Look Events built out a 360-degree slow-motion video photo booth, where guests or groups of up to four people could snap a branded video, then text or email it themselves.
Photo: From the Hip Photo 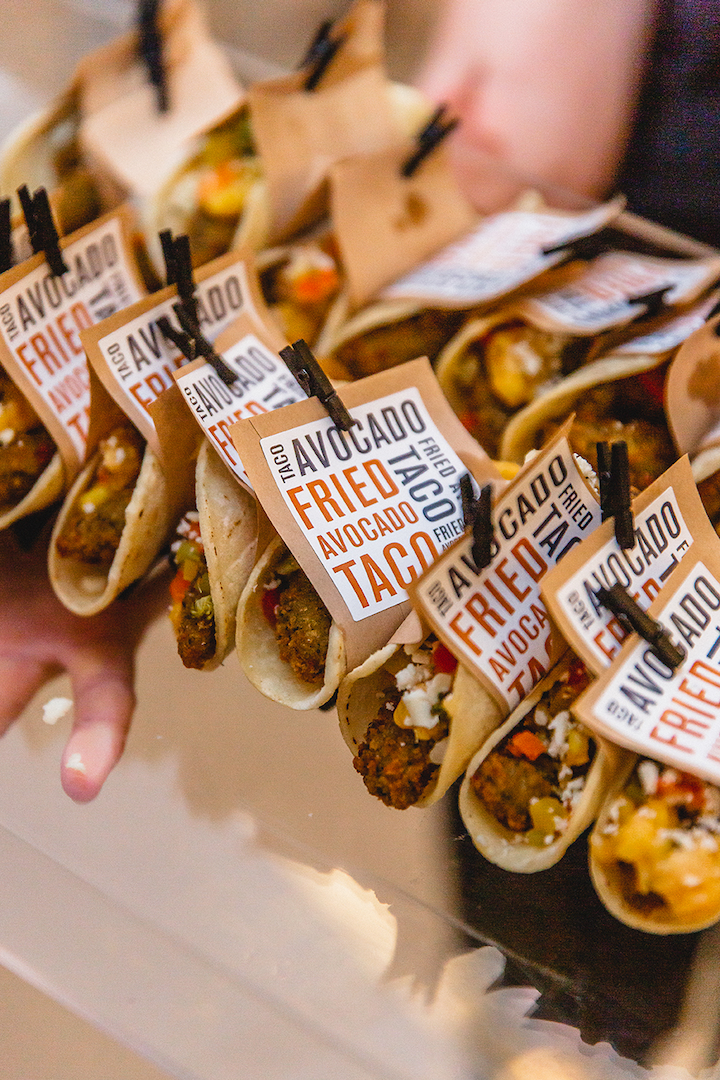 Fried avocado tacos were created special for this event. The clip on each helps guests to pick it up and hold it together, as well as give it a creative menu display.
Photo: From the Hip Photo 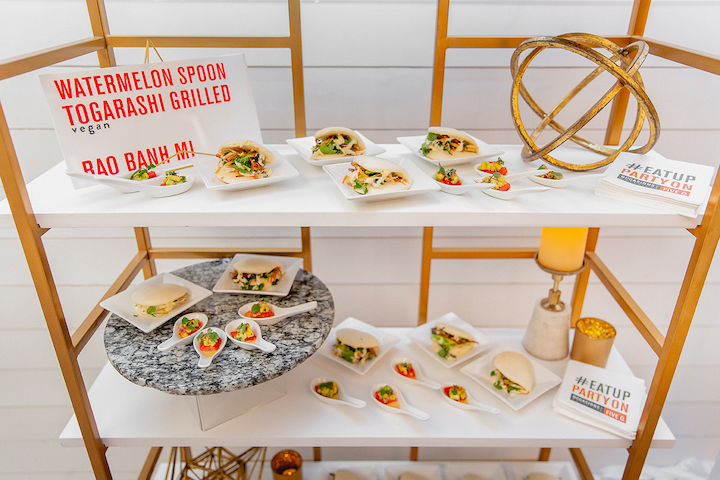 Occasions Catering often creates many vegan options, as Denver is seeing a lot of vegan and vegetarian requests. “If we can change a few sauce ingredients or something small to make it vegan, we do that. It’s a big ask for us,” said Couture.
Photo: From the Hip Photo 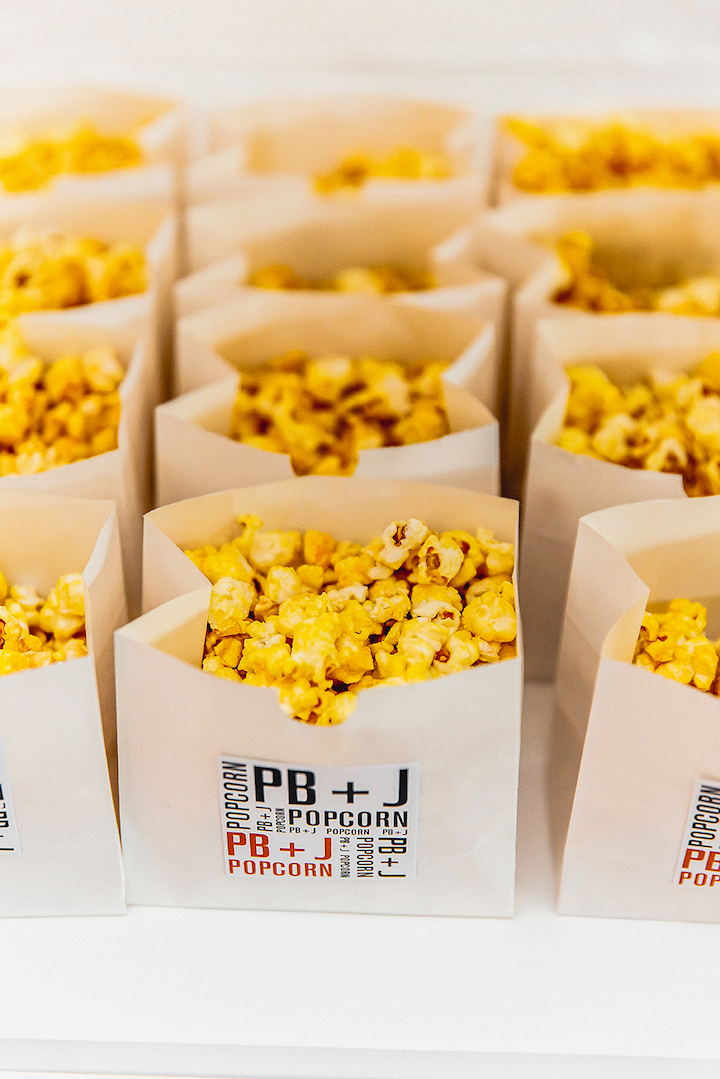 Popcorn bags with branded stickers are a hot item with clients, and Occasions Catering usually fills them with chips, popcorn, or root veggie chips. PB&J popcorn helped with the yellow-gold decor of the evening.
Photo: From the Hip Photo
More in Programming & Entertainment