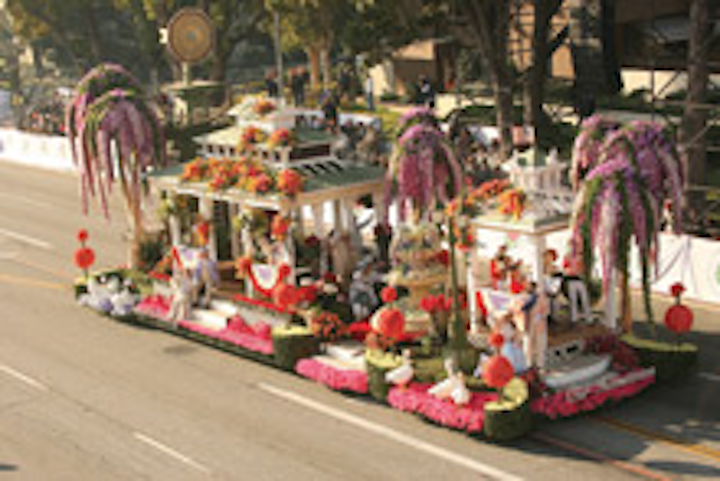 The Tournament of Roses parade
Photo: Frederick M. Brown/Getty Images
1. The Tournament of Roses
On New Year’s Day, the annual Tournament of Roses Parade and Rose Bowl takes over Pasadena—and the homes of millions of TV spectators. On its 119th anniversary, in 2008, the parade included its annual mix of majestic organic floats, equestrian units, and marching bands from around the nation starting their circuit at 8 a.m. (with the Rose Bowl game beginning at 2 p.m.).2. Los Angeles County Fair
You might not expect that the country’s largest county fair is in the L.A. area—but it is. The event drew more than 1.3 million visitors in 2007, and returns to the Pomona Fairplex in September. The huge annual to-do features live concerts, horse racing, exhibits, competitions, and carnival rides, as well as 2,000 vendors.

3. West Hollywood Halloween Carnaval
Close to half a million costumed Angelenos pack Santa Monica Boulevard from Doheny Drive to La Cienega on Halloween night for this huge party. The annual festival runs from 6 p.m. to midnight—clogging traffic for far  longer—and features four entertainment stages and a costume contest. The City of West Hollywood produces the event, as well as a  series of others leading up to it.

4. Revlon Run/Walk for Women
In 2007, Sheryl Crow and Michael Chiklis hosted more than 50,000 participants for this annual 5K walk. Pat Benatar performed, and Revlon spokeswomen Eva Mendes, Bo Derek, and Jessica Alba were also in attendance. The annual event raised more than $3 million to benefit women’s cancer organizations. This year’s walk will take place at the Coliseum on May 10.

5. Fiesta Broadway
The nation’s biggest Cinco de Mayo event, in one of the country’s largest Latino markets, takes over 36 blocks in downtown L.A. and attracts more than half a million people. Attendees flock to Broadway to attend the celebration, which features Latino performers, carnival rides, ethnic foods, and exhibits, and donates to local charities. This year’s event will be on April 27.

6. Gay & Lesbian Pride Festival & Parade
This West Hollywood parade draws 400,000 spectators, who line Santa Monica Boulevard from Crescent Heights to Doheny to get a look at floats and colorful costumes. This year rounds out the three-year arc of the continuing themes of “love,” “equality,” and “pride,” and will also celebrate the 30th anniversary of the iconic rainbow flag. The parade is set for June 8.

7. Golden Dragon Parade
The Chinese Chamber of Commerce presents this parade, which attracts more than 110,000 spectators for a celebration of the Chinese New Year. This year commemorated the beginning of the Year of the Rat, with festivities taking place on February 9 in downtown L.A. at Cesar Chavez and Broadway.

9. Hollywood Santa Parade
Poised for a major comeback? After the Hollywood Chamber of Commerce dropped the Hollywood Christmas Parade following its 75th anniversary in 2006, the City of Los Angeles took it over and renamed it. The rechristened 2007 parade featured the cast of High School Musical, with Bob Barker as the grand marshal. The new parade maintained the traditional U-shaped route on Hollywood streets on the Sunday following Thanksgiving. Organizers estimate that 750,000 spectators turned out.
More in BizBash Lists