The magazine lifted the traditional veil of mystery surrounding its Academy Awards bash to reveal some surprising new details of the upcoming event. 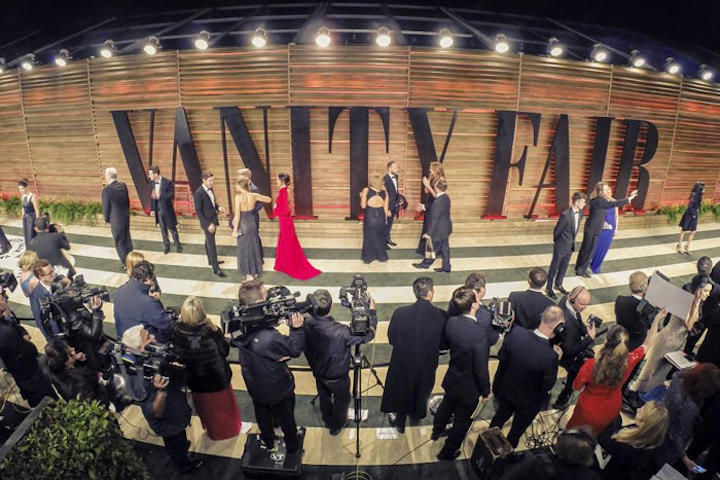 As the most coveted ticked on Oscar night in Los Angeles—and arguably one of the hottest-ticket parties any time of year—Vanity Fair's bash has a look and feel that has historically been known only to an uber-exclusive few. But this year, the magazine is being unexpectedly transparent about the legendary fete.

Sharing the rare behind-the-scenes details was Basil Walter, a practicing architect as well as the architect-designer of the annual party. He shared a preview of this year's event, as well as its storied past, at a panel known as "Oscar House that V.F. Built” at the WeWork space on Wednesday. The discussion was part of the Vanity Fair Social Club, which is one element of the magazine's Campaign Hollywood Oscar week programming.

After moving from its longtime home when Morton's closed in 2007, taking a year off during the writers' strike, and then doing stints at the Sunset Tower Hotel and a parking lot behind Sunset Plaza, the party will make a move west this year. On Sunday, February 22, the 2015 Vanity Fair Oscar party will take place at Beverly Hills City Hall and the new Wallis Annenberg Center for the Performing Arts. Crescent Drive has already been closed and load in is underway—which explains the mysterious structure that has been going up in the area for days.

Walter says he's thrilled with the new location because, even more than last year's Sunset Plaza party, it will allow the team to create a structure from scratch. "The entire interior is new, and we are engaging the courtyard area of City Hall and trying a bunch of different lighting effects in order to get the most out of that particular location," he says. "I'm excited about the venue, just having the location of Beverly Hills City Hall as our backdrop and the capacity to design a custom structure. As architects, we want to design buildings, and that’s how we think of this particular party. We try to take that down to the most minute level of detail."

He says that the experience of designing New York restaurants, as he has through his firm, has helped inform his decisions regarding temporary event spaces—in particular dining rooms in the round that allow sweeping vistas for attendees.

Walters explains this year's space will include a 6,000-pound chandelier and once again food the will come from Thomas Keller. It will not be fussy fare, however, but rather a simple menu in keeping with Vanity Fair editor Graydon Carter's preferred tastes.

As for the new venue and the ever-growing demand for access to the party, Walter says the new venue "has the potential to change the scope" of the guest count, but that the party is unlikely to ever become a very democratic affair. "The number people who want to come is so much larger than any venue could accommodate. The dinner always stays consistently around 150, but we do try to increase the flow [later in the evening]," he says. Overall, the total guest count throughout the night is about 1,200.

So what will the theme be for this year's retooled affair? There won't be one, and there never has been, Walter says. "We really dispute the notion of themes. Inspirations are fairly consistent, as far as [Carter's preferred] reference to mid-century modernism as his design compass. We do also try to incorporate the nostalgia [of] the old Hollywood of the 1930s and '40s."