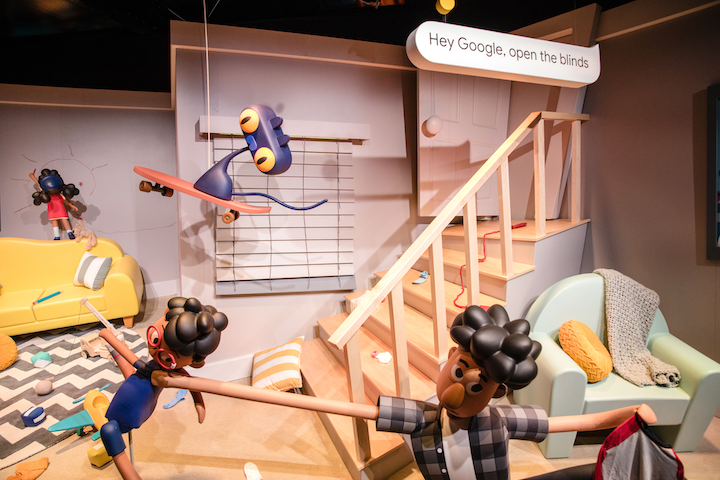 Google's 36,000-square-foot booth at C.E.S. 2019 was a three-minute musical coaster, powered by Google Assistant, that took attendees through a house with an animatronic family. At the end, riders were given a picture, a branded macaron, and a free Google Home Hub redemption code.
Photo: Courtesy of Google 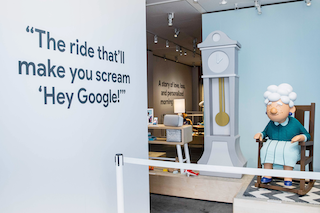 At the C.E.S. booth, an animatronic grandmother commented on guests' clothing. Google partnered with Sparks to produce the activation.Photo: Courtesy of GoogleAttendees at this year's C.E.S. in January got a fun surprise at Google's two-story, 36,000-square-foot booth. The colorful space centered around the Google Assistant, the company’s A.I.-powered virtual assistant—but with a memorable twist: Guests could ride a three-minute theme park ride through a life-size house. Dozens of interactive vignettes and demos showcased the product in an entertaining way, such as through an animatronic grandmother who commented on guests' clothing.

This type of playful environment is classic Google. (After all, last year's booth at the same show was a three-story playground complete with a 21-foot slide.)

"Close your eyes and think of Google," says Tara Back, the brand's vice president of events and experiences. "Chances are you're imagining a colorful logo above a search bar on a white background. It’s digital. ... [But events are] a chance for people to get to know us, and for us to humanize our brand. You trust people—and brands—when you know them."

The human-first approach extends to the tech giant's developer conferences, Google Cloud Next and Google I/O. The latter, which made BizBash's list of 2019's Most Innovative Meetings, highlights the intersection of creativity and technology through a music festival-inspired format, including a choose-your-own-adventure-style evening gathering filled with magic shows, tattoo studios, arcades, and memorable performances. At this year's event, held in Mountain View, California, in May, rock band the Flaming Lips performed alongside—what else?—a bowl of A.I.-enabled inflatable fruit.

Back says that the same level of care and creativity goes into planning developer conferences as it does to consumer-facing activations. "It doesn't matter if it's an enterprise audience; people have an idea of what Google is, and they expect to walk into something that is different than walking into an enterprise conference for [another tech brand]," she notes. "Even if our experiences are attended by a relatively small audience, they are always designed with the idea of reaching the widest possible audience." 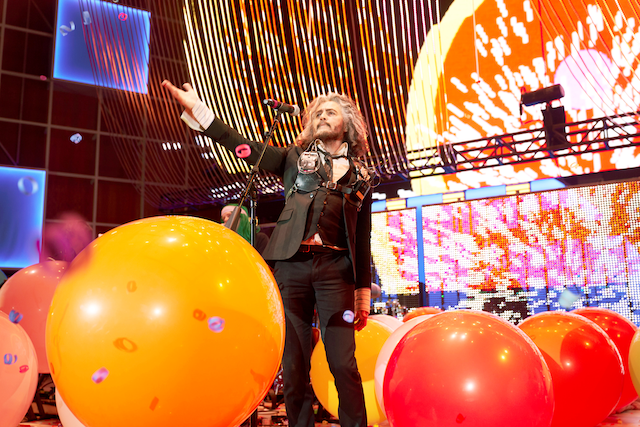 In recent years, Google has focused its marketing efforts around the idea of "helpfulness," says Back, noting that the brand weaves that concept into all Google experiences regardless of which product is being showcased. At this year's Mom 2.0 Summit in Austin, for example, Google centered its sponsorship around its "Be Internet Awesome" online safety program—an appropriate choice for an audience of parenting bloggers. The brand built an interactive maze that focused on key pillars of the initiative; after attendees completed the maze, they were led into a coffee shop where Google representatives discussed Internet safety.

At the Cannes Lions Festival of Creativity in June, Google highlighted its latest features at the "Google Beach." A variety of stylish stations focused on helpful offerings; at an ice cream shop, guests could translate the menu into their chosen language by using Google Lens, while an interactive space highlighted the importance of two-step verification for passwords. Guests could also try out new AR, design baseball caps using Google Doodle, and create GIF portraits using a Google Pixel phone.

"We dial up or dial down the playfulness, depending on who the audience is," says Back. "A press audience is quite different than a B-to-B audience or a consumer audience; it's about time and place and relevance. ... The role of marketing in Google is to know the user, know the magic, and connect the two."

She continues: "Our experiences need to be as smart, as charming, and as helpful as anything that Google does."

Unsurprisingly, the massive tech company—whose parent company, Alphabet, was number 15 on the Fortune 500 list in 2019 (up seven spots from the previous year)—has a number of event teams across various departments. Back's events and experiences team, which is responsible for reinventing tentpole events and creating new brand experiences, reports to the company's chief marketing officer.

"[We're] made up of specialist teams, not unlike an agency, that includes event managers, producers, creative strategists, conceptual creative, art and copy teams, graphics, and experience design," explains Back, adding that there are also teams that focus on editorial content, executive engagement, and influencer marketing.

That large, diverse team helps the brand keep a distinct point of view at its events. "Anybody can get lucky and do something awesome once; [we focus on] the consistency of the work, the scope of the work," says Back. "I always say, you don't have to see a Google logo to know it's one of our events." 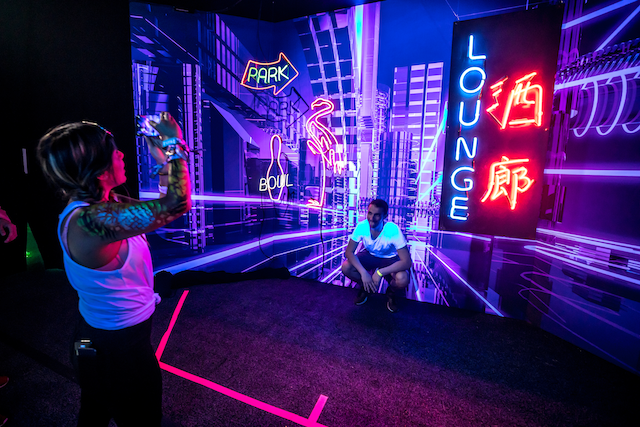 At the Governors Ball music festival in May, Google Pixel offered charging stations and a UV tattoo station, plus four futuristic, back-lit photo backdrops. Photos were emailed to guests and also displayed on a giant Pixel outside the entrance.Photo: Freedom Film LLC