Guests are guaranteed a good time—even if their candidate doesn’t win—with this festive decor, food, and more.

Cleveland and Philadelphia aren’t the only hosts rolling out the red, white, and blue carpet this election season. From Trump impersonators to patriotic decorations, here are some all-American ideas for throwing a winning event. 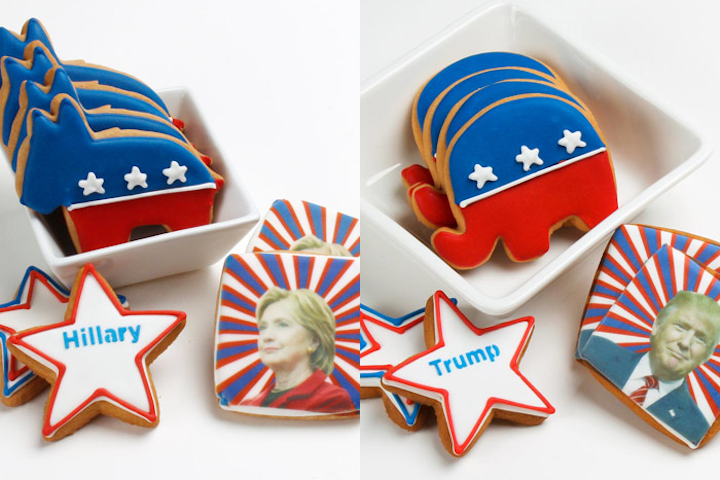 Eleni’s New York offers an assortment of election-theme cookies that will surely win over guests’ appetites this election season. The political cookies make a great gift for campaign fund-raisers, political gatherings, and personal get-togethers, with eight different sets including Trump and Clinton collections, as well as Republican- and Democratic-inspired goodies. Prices range from $8.95 to $65.95. The collections are available on elenis.com and at the bakery’s flagship location in Chelsea Market.
Photo: Courtesy of Eleni's New York 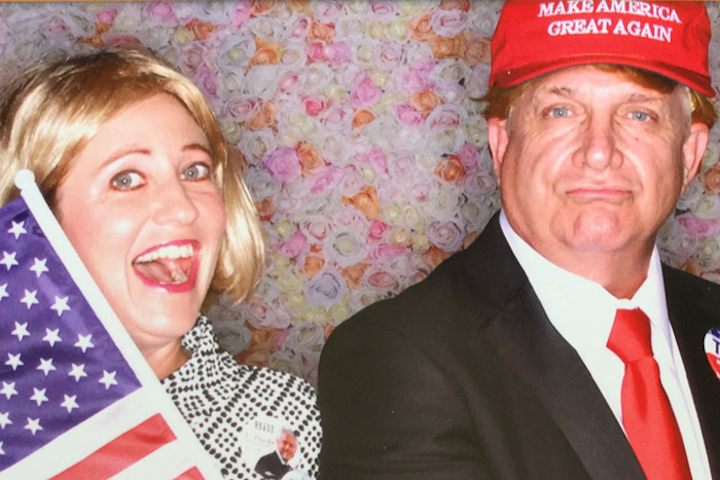 The real winners during this election season appear to be Hillary Clinton and Donald Trump impersonators, with almost seven times as many requests for the Donald as compared to Hillary, according to GigSalad, an online marketplace for booking talent that’s based in Springfield, Missouri. Candidate lookalikes, such as the duo pictured from Boca Raton, Florida, mingle with guests and even give speeches. In addition to the Hillary-Donald team, GigSalad also lists solo entertainers in various locations, with pricing from $200 to $5,000. All bookings are handled through the site.
Photo: Courtesy of GigSalad 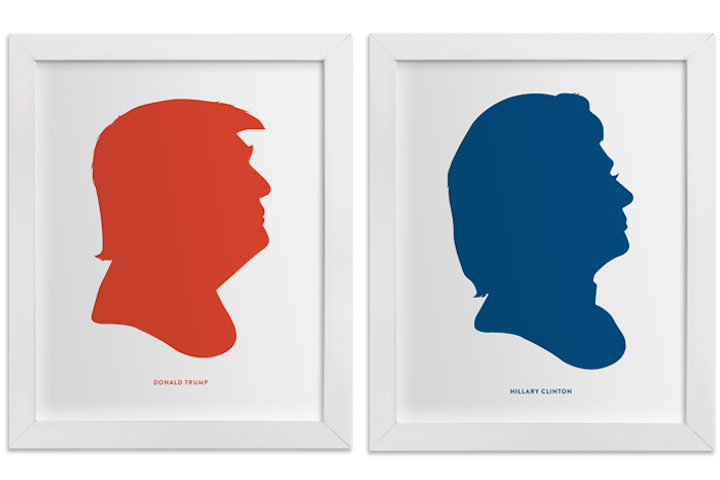 Minted lets customers upload any side-profile photo, such as Clinton's and Trump's, to create a custom silhouette art print. It’s available foil-pressed, letterpressed, or in standard printing in a variety of colors. Pricing starts at $82 for a 5-inch-by-7-inch unframed print.
Photo: Courtesy of Minted 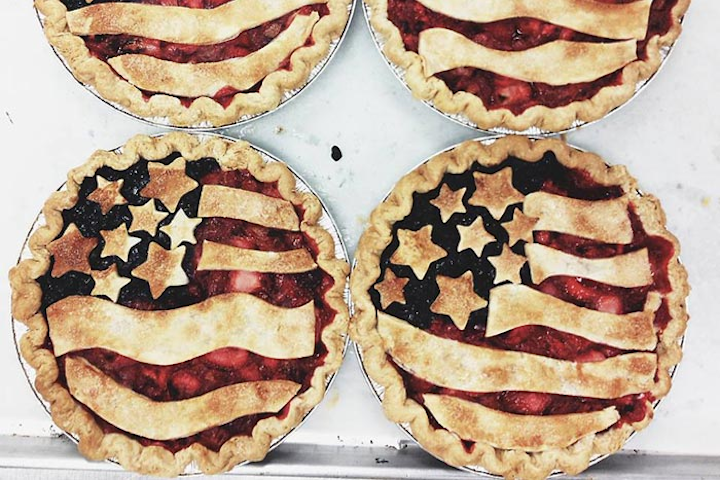 In Austin, Texas, Tiny Pies makes flag-inspired pies. The desserts are filled with cherries and blueberries and topped with a stars-and-stripes-patterned crust.
Photo: Jody Horton Photography 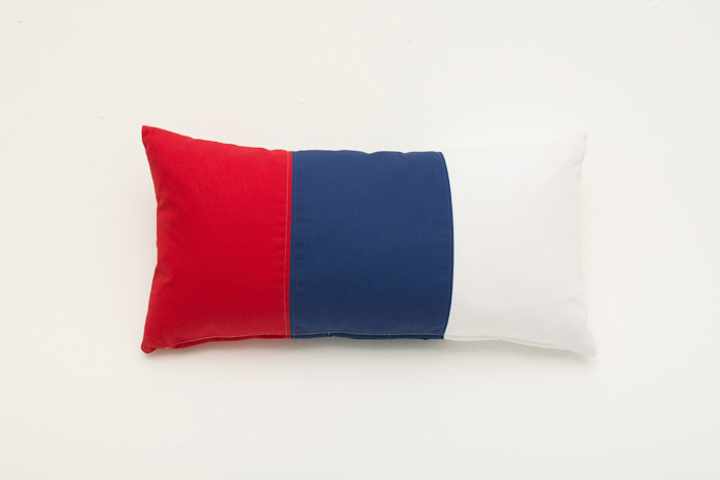 Taylor Creative’s tri-stripe pillow ($30 each) is an easy way to add American flair to a seating area; it's available for rent in New York.
Photo: Courtesy of Taylor Creative 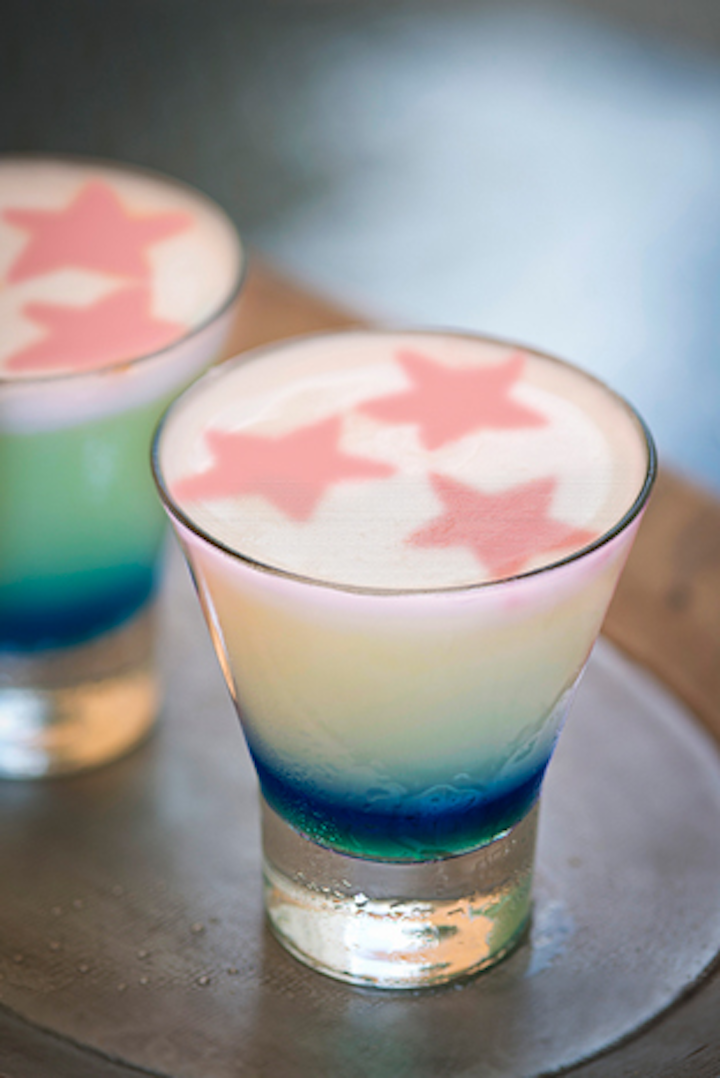 Rhumbar in Las Vegas serves Americana cocktails including the Patriot, which is made with vodka, lemon juice, simple syrup, blue Curaçao, and egg whites. The garnish is stars made of Angostura bitters.
Photo: Peter Harasty Photography 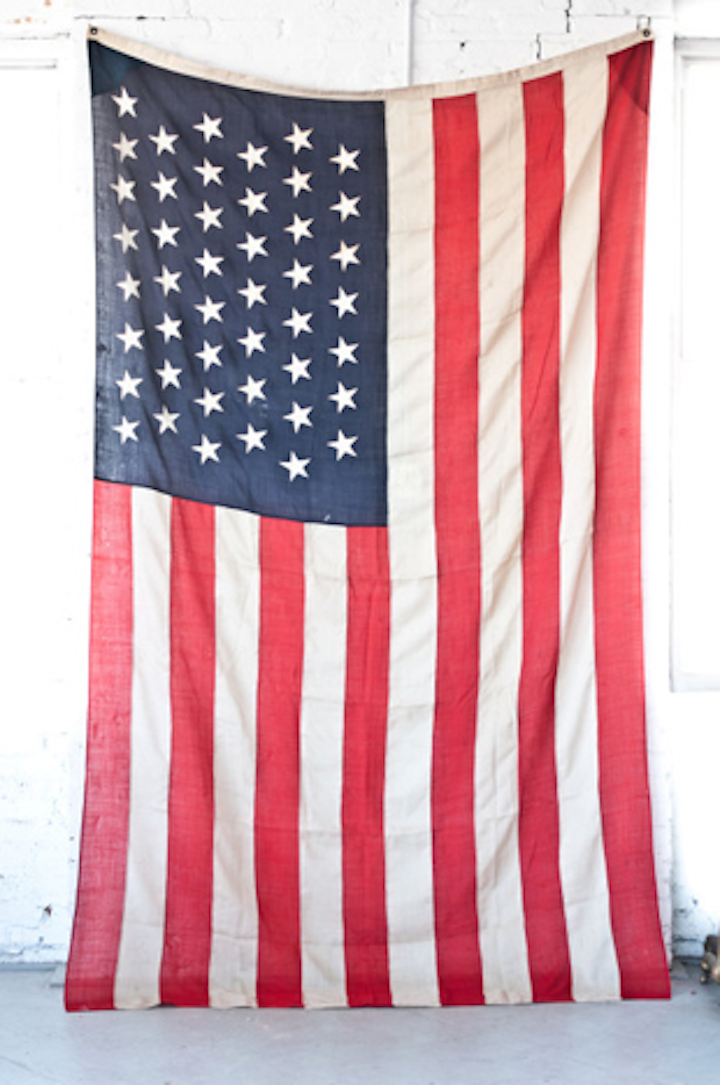 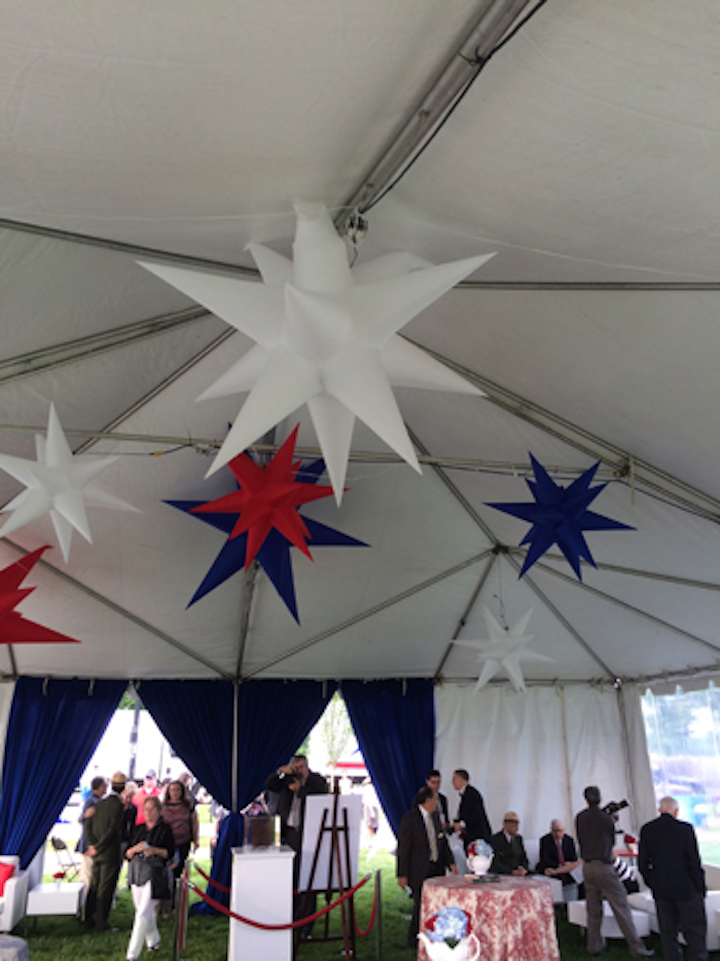 At the Washington Monument reopening ceremony in May 2014, 48 inflatable stars in red, white, and blue from Air Dimensional Design decorated the reception tent and surrounding area.
Photo: Doron Gazit 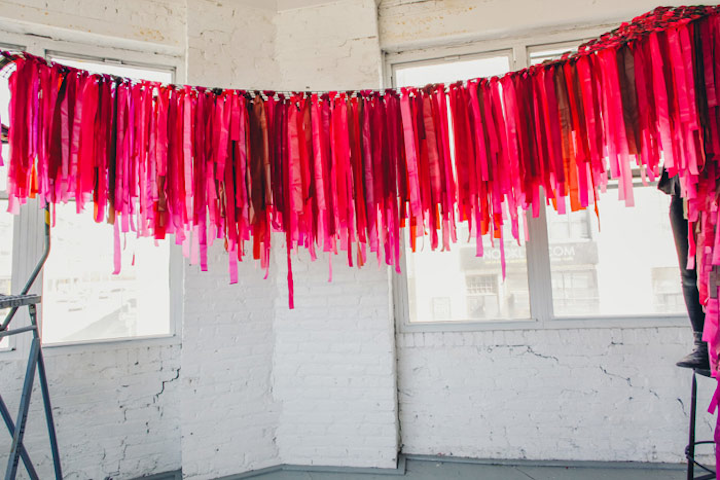 Instead of traditional patriotic bunting, the Color Condition Swag packs from Patina Rentals offer a modern spin. Each swag is a one-of-a-kind piece that measures 25 feet in length. The packs consist of two swags for $350 per day.
Photo: Courtesy of Patina Rentals 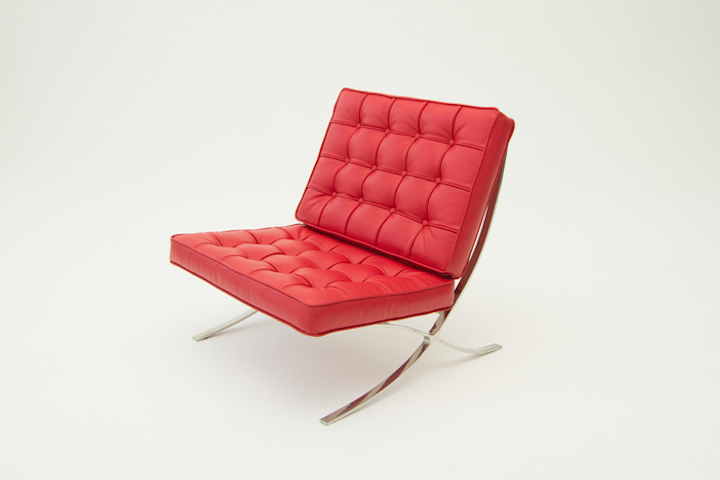 The red Barcelona chair ($225) from Taylor Creative is the perfect pop of color for an event space; it's available for rent in New York.
Photo: Courtesy of Taylor Creative 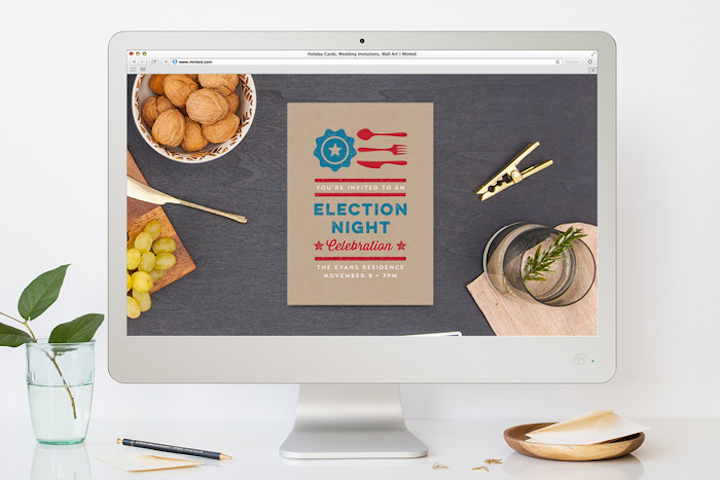 Now through September 30, Minted is offering free online invitations that customers can create using designs from the online retailer’s community of independent artists. The invites can be personalized with photos, colors, text, and shapes.
Photo: Courtesy of Minted 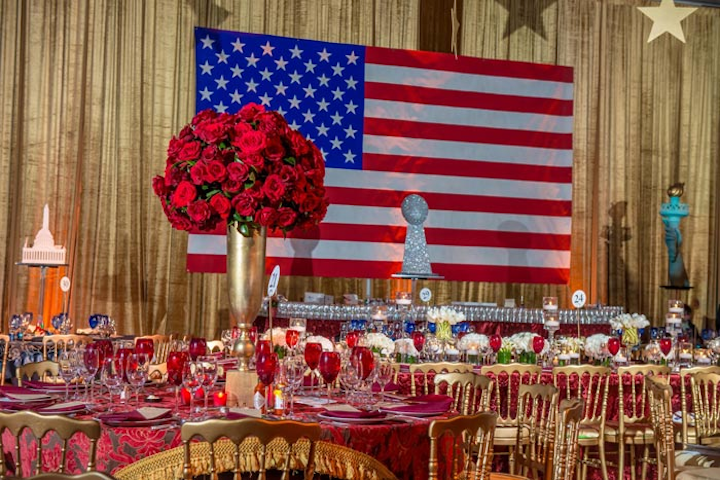 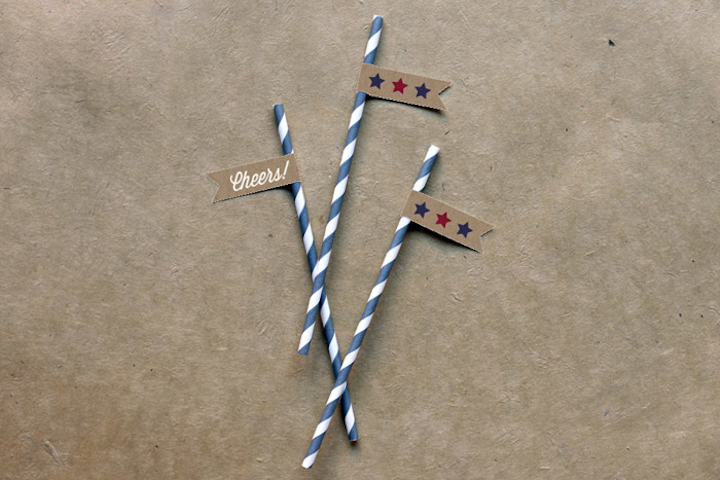 Attach Minted's starry flag stickers (24 for $13) to straws and drink stirrers for a festive detail.
Photo: Courtesy of Minted 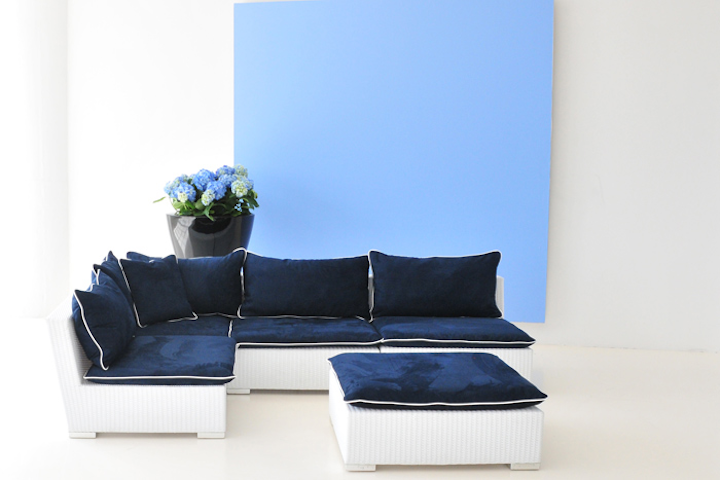 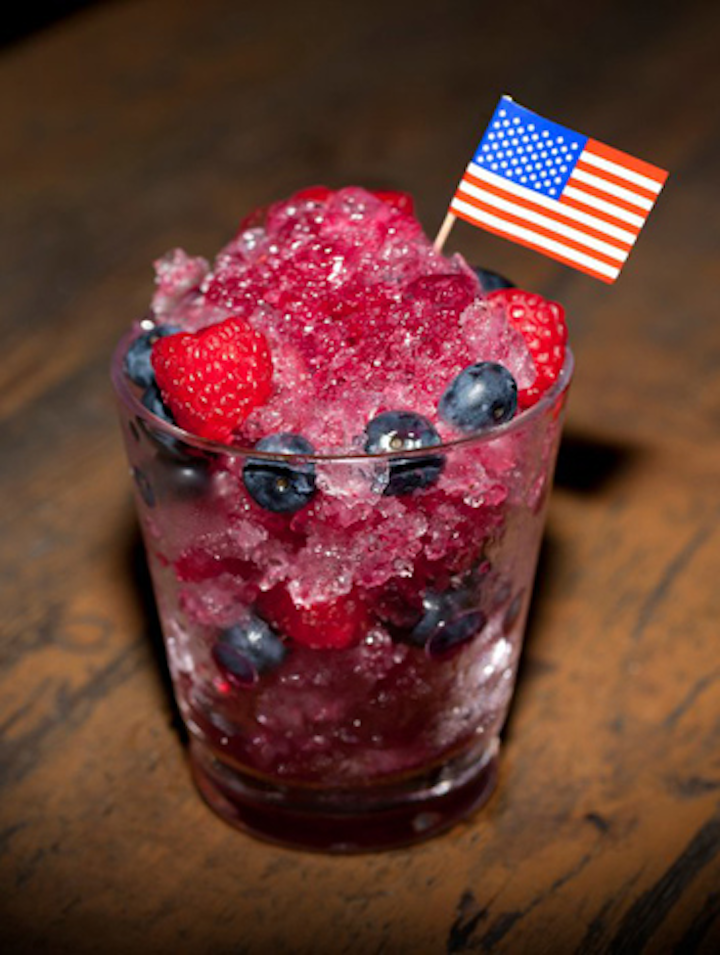 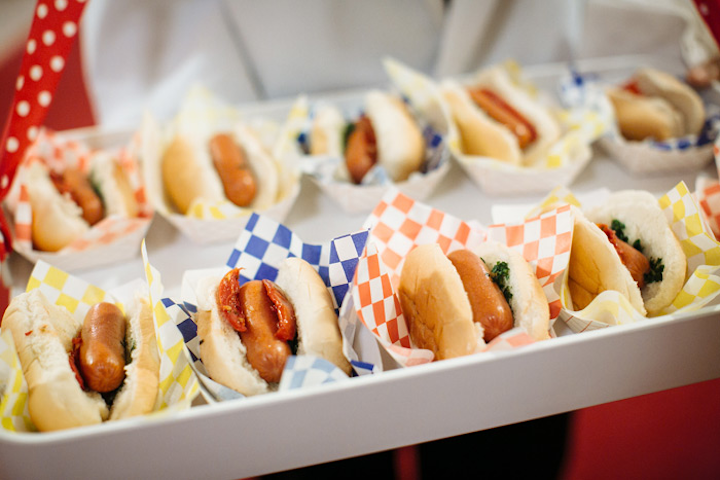