The use of the social media app has skyrocketed, and companies are trying to figure out how they can join the party. 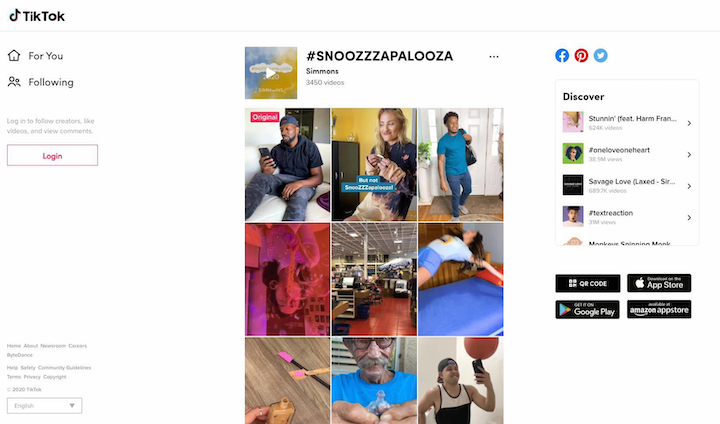 With in-person activations currently on hold due to the COVID-19 pandemic, more and more brands are using social media platforms such as Instagram to host events and reach their audience. But when it comes to targeting the Gen Z consumer, TikTok has quickly emerged as the hot spot.

“We realized that 2020 essentially has been canceled. Everything that our Gen Z and millennial consumers love to do—which includes going to festivals and going to concerts and going to all of these live events—wasn't going to happen this year,” says Hilary Bergman, account director at Burns Group. “And instead they started focusing a lot more time on TikTok and having fun and engaging with others on TikTok.”

With that in mind, Burns Group, which had partnered with mattress brand Simmons on a recent rebranding, decided to host #Snoozzzapalooza, a six-day hashtag challenge on TikTok, as part of its newly launched “Just for Fun-ZZZ’s” campaign.

“Coachella is canceled. Lollapalooza is canceled. But what if we could bring a fun, bed-based festival to you through Snoozzzapalooza? It was a one-man festival, of course, because it's through TikTok and the users are creating their own rendition of their festival. But it was our way of playing into festival culture and bringing that spirit into the homes of our consumers this summer,” Bergman explains.

The concept also played into the idea that these consumers “care more about living than they do about sleeping” at this age; Gen Zers were born between 1995 and 2015 and are currently between five to 25 years old.

With the help of a group of TikTok creators, ranging from musicians to dancers to comedians to athletes, users were tasked with showing how they transport themselves to a festival—via their mattresses.

Burns Group worked directly with the app to help identify the appropriate creators. “It was really important for us to partner with the right creators who we felt had a really diverse set of skills and followers, so we could reach as many people as possible in a really authentic way,” Bergman says. “I think authenticity is key to TikTok.”

She adds that other social media platforms tend to be “more passive in nature,” but that “TikTok is a place where you want to join in. And it's really inspiring you to partake in the fun. It felt like a really great way to not only reach our audience, but gain a lot of engagement with them. And then also the reach is really huge.”

The challenge garnered 2.7 billion views, with 2.3 million videos created by over one-million video creators. Plus, the campaign sparked a 104-percent increase in visitors to Simmons.com versus the week prior.

“It’s really important to listen and learn from your customers and fans of your brand,” says Hayden Perry, director of marketing for F’real, a company that makes blend-it-yourself frozen beverages. “Last summer, F’real gained a massive following organically on TikTok; consumers were even creating content with F’real before we even had an account on the platform. Since then, we’ve wanted to not only leverage this audience and engage with them, but reward them with offerings and campaigns tailored and developed for them in particular.”

F'real's live after-party event featured TikTok creators including singer, dancer, and model La’RonHines.Photo: Courtesy of f'realThe brand recently hosted its #FrealAF challenge on TikTok as a lead-up to the launch of a new digital experience and product offerings, as well as a live after-party with TikTok creators for its “Choose Your Alternate F’reality” campaign.

“As a digitally native generation, it’s important to meet [Gen Z] where they are rather than ask them to seek you out,” Perry says. “They’re the ones who also built the platform and made it what it is today.”

Jack Bedwani, the CEO of the brand consulting firm the Projects, expands upon that, noting that “millennials can remember a time before the Internet and a time before social media, whereas Gen Z can't.” He adds that Gen Z has a “much more sophisticated understanding of how media works, and how data works and how technology works.”

Originally known as Musical.ly, TikTok—which is owned by the China-based ByteDance—is now famous for its viral dances, lip-sync clips, and beauty transformations, but it’s also facing a possible ban in the U.S. over concerns it could be used for surveillance by the Chinese government. The threat, though, hasn't diminished its popularity: The app was downloaded nearly 71 million times in the App Store in the second quarter.

What works on TikTok and for Gen Z users
In order to attract TikTok users, brands need to ditch the polished content and not overthink it. "If you want your content to work on the feed, you've got to keep it real and keep it in line with what else is on the feed. Otherwise it will stick out and it won't work," Bedwani explains.

"First and foremost, I think it really needs to be fun," says Bergman. "But it also needs to be somewhat simple to join in on. Reducing the barrier of entry really makes it so that a lot of people can join in."

Bergman also stresses the need to use music strategically. For the #Snoozzzapalooza challenge, Burns Group custom-created the track with help from TikTok, using the music to serve as a guide for users. For example, the song should include a drop beat to signal a transition point.

Bergman also says that “it's really important to go in with an open mind. When we normally do productions with videos or [when] we work with influencers, it's more buttoned-up and more prescriptive in nature. …But with TikTok, because it needs to feel so authentic for the creators, because everyone has their own different spin on how they do things and what they bring to the table, we really wanted to make sure we went in with an open mind and let the creators put their own creative spin on things.”

Bedwani echoes that advice, saying that TikTok “is not for any particular sector or brand—but it's for brands that are willing to be a little less serious about their own identity and brand aesthetic online. You have to be willing to let go of your brand a little bit and allow it to open to interpretation. Because TikTok is all about the remix, and that's what makes it interesting.”

Being the most tech-savvy of all generations, Gen Z has “built up a kind of filter around authenticity and B.S.,” Bedwani says. Perry adds, “Users can point out ads very quickly, so being able to actually speak their language and appeal to them in an organic way is very important."

And while staying tuned into TikTok trends is important for producing relevant content, producers should avoid getting stuck on one popular idea. “It's not just about dance,” Bedwani says, referring to the app’s catchy dance memes. Brands think, “‘We just need a dance that catches fire and off we go.’ It's not that simple. It's not what it's really about. [It’s about] looking for generative ideas that people can make on their own, put a spin on, and apply their own personalities to.”

Bedwani says he believes this rise in TikTok usage, and virtual events in general, signals a shift in the industry toward digital-first event marketing. “I think whilst digital and social media used to be an extension of a real-world experience, what COVID has taught us is that it's going to be the other way around going forward. You're going to create communities and experiences digitally and through social, and then the event will be an offshoot or an extension of that online community.”