Brands grabbed attention with production-heavy events and exhibits, on and off the show floor.

About 200 exhibitors showcased their gaming hardware and software on the show floor, as well as at production-heavy press conferences hosted by major brands like competitors Sony and Microsoft. And after hours, brands’ parties kept the crowd entertained late into the night all week.

Overall, the show’s 28,000 room nights and fanfare generated an estimated $40 million for Los Angeles. And participants broke the show's previous social media numbers across all social channels, with more than two million posts on Facebook, Twitter, and Instagram combined.

Here's a look at photos from the show floor exhibits, press conferences, and parties that dominated the week. 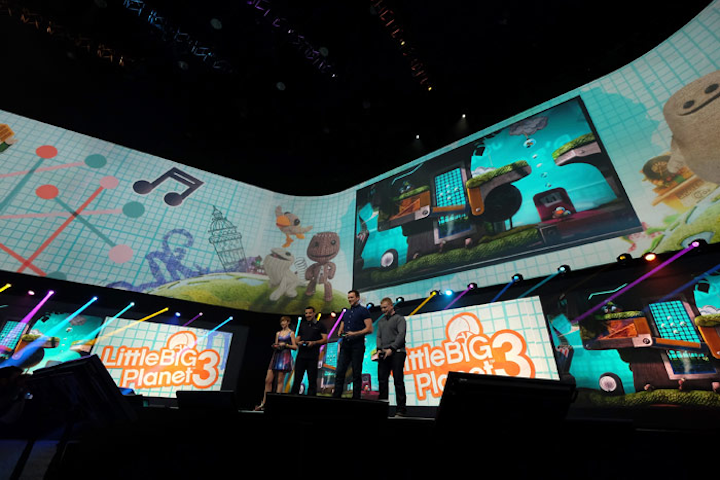 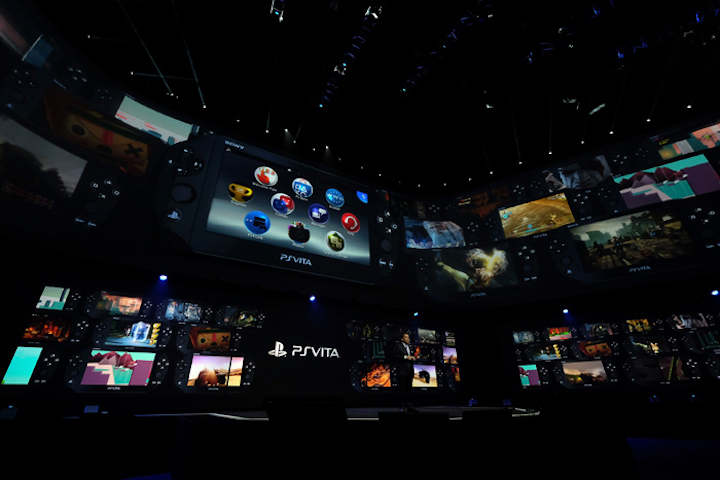 Sony's press conference surrounded guests with screens on multiple planes and angles for an immersive experience on Monday before the show floor officially opened. 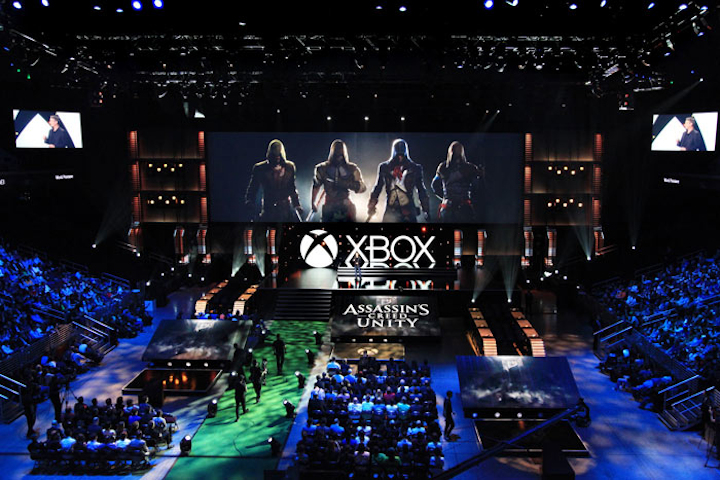 This year’s Xbox Media Briefing took to the Galen Center, with an attendance of more than 4,300 people, including broadcast, print, and online press, partners, developers, and fans. Spike TV picked up the live, commercial-free broadcast, and the event live streamed online as well. The event got an immersive set design from producer Zed Ink that flanked the arena from end to end. An 80-foot center screen changed dynamically throughout the show through massive moving semi-transparent scenic doors that opened and closed to accommodate trailers and demos of varying aspect ratios. Three additional LED screens stood angled on the floor as the backgrounds for satellite stages designed for the staging of multi-player demos and presenters throughout the show. 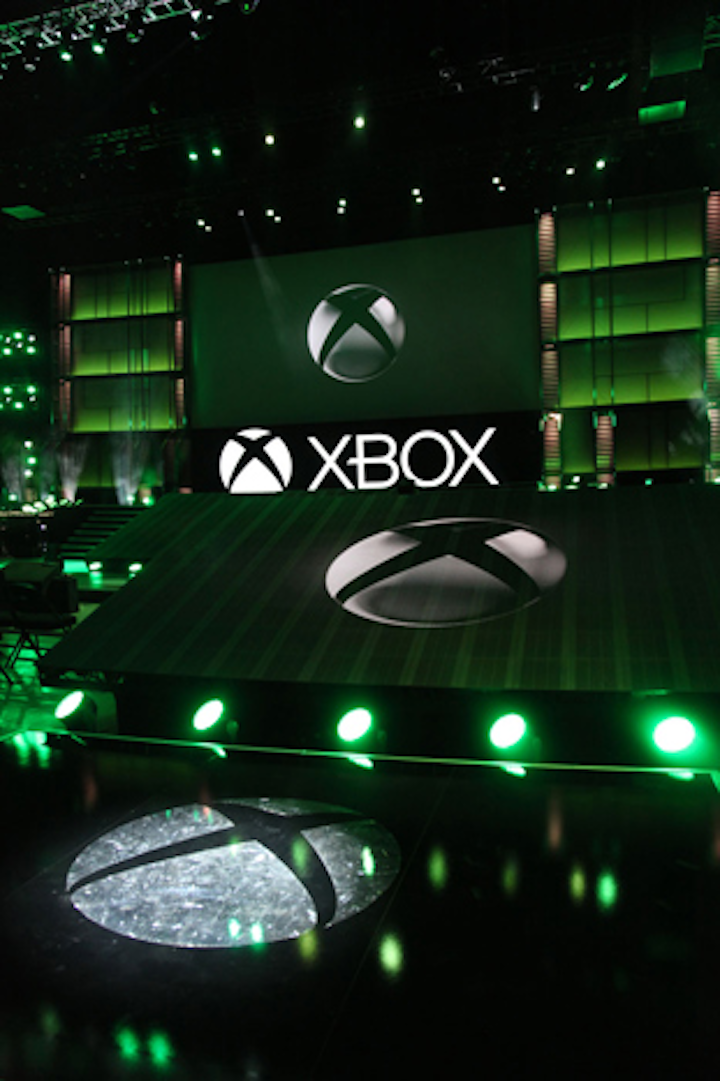 The show had more than a terabyte of custom animations, transitions, and show graphics. About 600 lighting instruments and 4,000 infrared remote-controlled light-up bracelets contributed to an environmental design that fully immersed the audience into the experience. 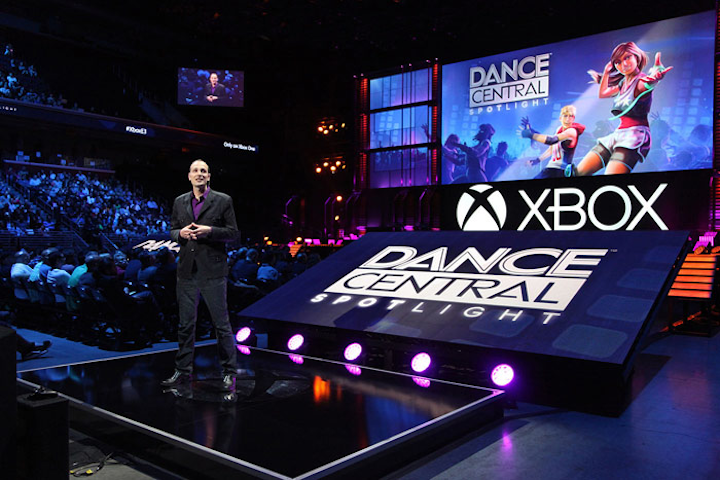 Highlights included announcing the Master Chief Collection for the Halo franchise, the return of Crackdown, and the new multi-player Assassin’s Creed, Unity. Zed Ink handled the creative and production for the event, collaborating with the Xbox Global Marcom team, led by Mark Harper, April McKee, and Beth Honebrink. 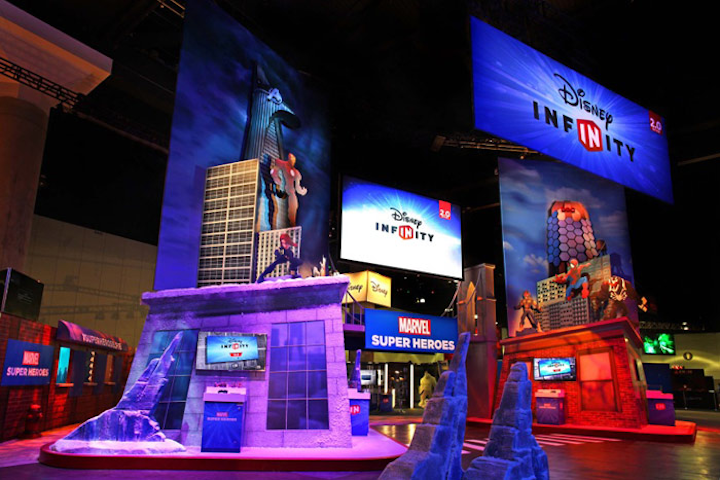 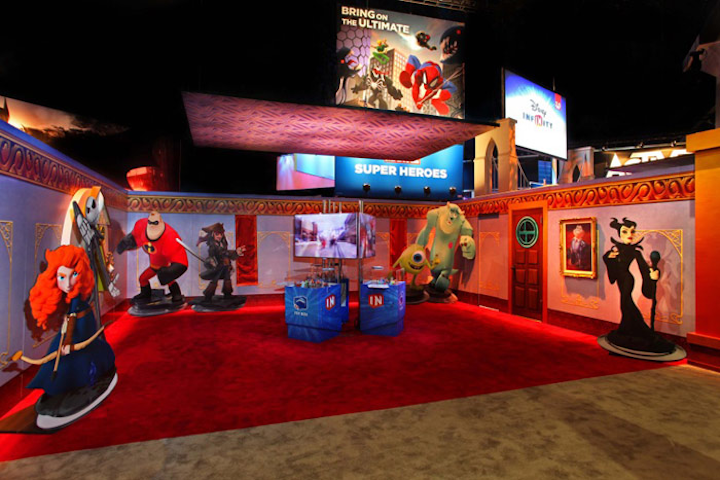 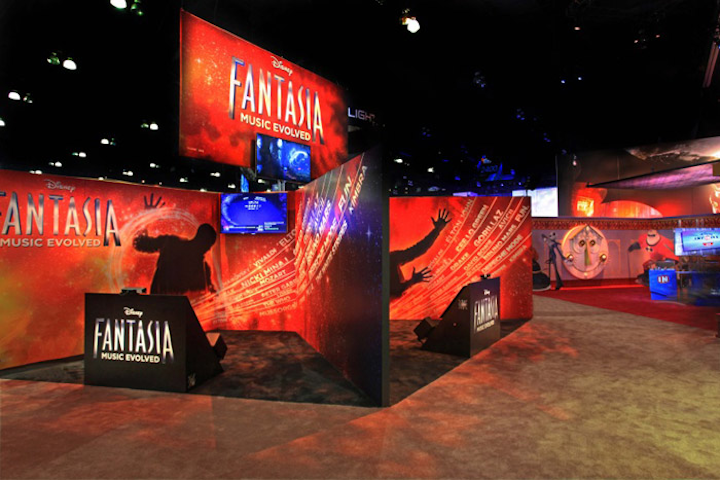 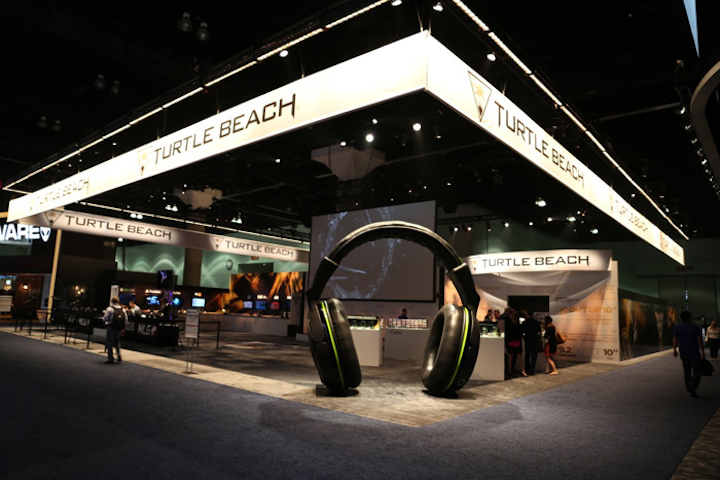 Turtle Beach’s booth on the show floor, produced by Ignited, showed off the brand's headsets with a giant version of the product as an attention-grabbing way to get guests inside, and visually define the exhibit entryway. 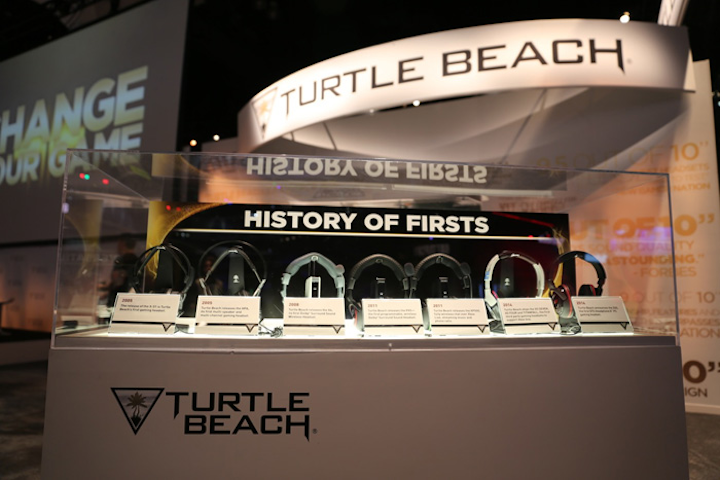 Turtle Beach's "History of Firsts" headsets showed off versions of the products over time. The museum-style motif is popular at E3, with the show even hosting its own "Video Game History Museum," that includes vintage classic games and accessories. 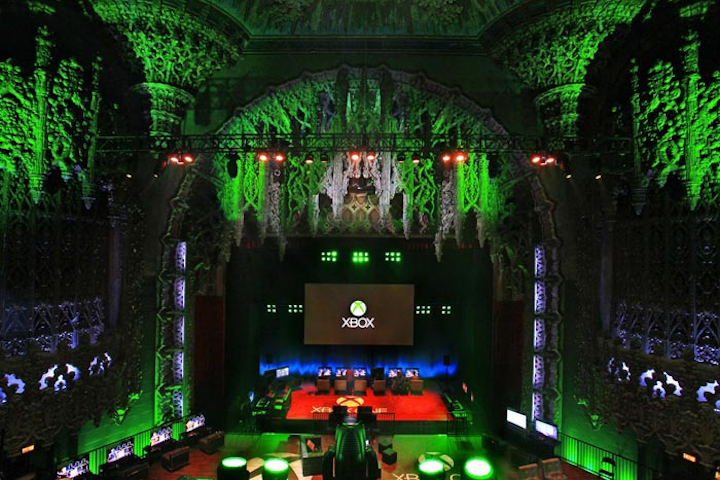 The Best of Xbox Showcase transformed United Artists Theater, an iconic venue in the Spanish Gothic Style theatre at the Ace Hotel, for a night of hands-on gameplay, demos, and sneak peeks of new and upcoming games for Xbox One. Working with Jennifer Tweed, Beth Honebrink, and Mark Harper from the Xbox Global Marcom team, experiential marketing agency Zed Ink produced the affair. 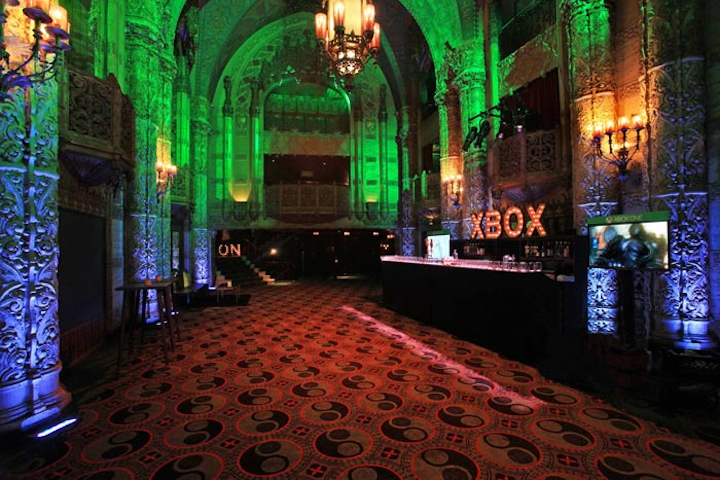 Decking covered the orchestra-style seating of the 1,600-square-foot, 87-year-old theater, providing ample floor space for the 52 game stations that were organized into lounge areas where developers, artists, and producers from the games offered insight and guidance. Over the three-level venue, there were three bars and a rooftop space with bar and hot tub for V.I.P. guests. 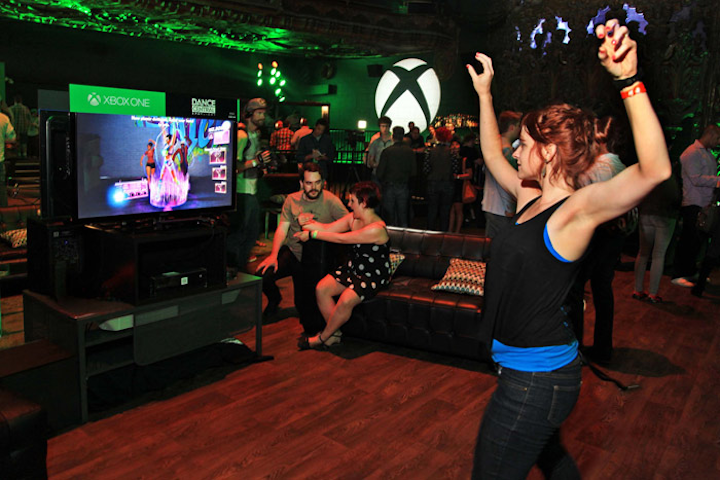 Media and gamers tried never-been-seen-before games at the venue, which was awash in green lighting. 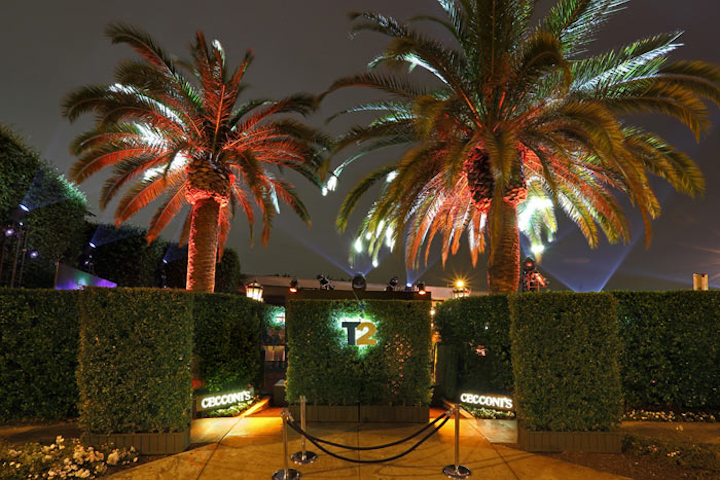 On Monday, Take-Two Interactive Software—the company behind games such as Grand Theft Auto and NBA 2K—kicked off E3 week with a private event at Cecconi's in West Hollywood. Tony Schubert and Event Eleven produced the party, where the brand’s logo decked hedging for a bit of sophisticated branding. 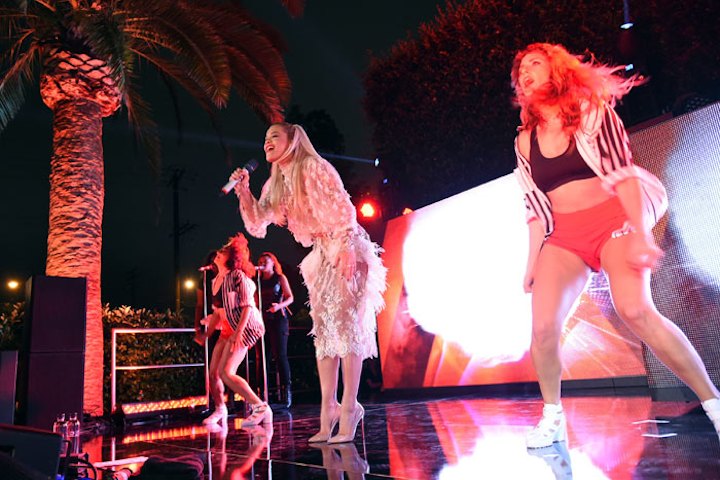 Hannah Bronfman and Michelle Pesce spun for the crowd, and Rita Ora performed. 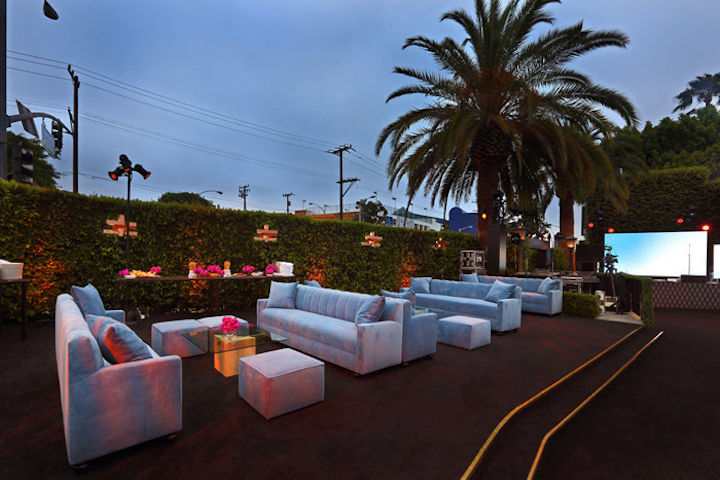 Sleek monochrome lounge seating made for an understated look at Cecconi's.