This year's edition of the Google I/O developer conference saw more information-sharing techniques, a ninth stage, and an increase in fun photo ops and activities.

Google is known for taking risks with its annual I/O conference.

For its 10th anniversary in 2016, the massive developer conference moved to the Shoreline Amphitheatre in Mountain View, California, and embraced a music-festival-like vibe. Then, in 2017, the conference was revamped again to create a hyper-organized neighborhood design, making it easy for the nearly 10,000 developers, partners, and staffers to navigate the sprawling event footprint.

For its 12th annual event, held May 8 to 10, Google’s events and experiences team wanted to really perfect the process—and expand on it.

“This is our third year at Shoreline,” explained Amanda Matuk, executive producer of Google I/O. “The first year was an exploration of a new venue and a new property, and the second year was really a perfection of that. Then this third year was about growing and expanding the content.”

Production-wise, the conference expanded into the neighboring lot, which had been used for bus pick-up and drop-off in previous years. Organizers added a ninth stage, allowing for a more robust schedule of content that accommodated more people.

“Now we know the lay of the land and how we can best leverage every square inch of that space to really bring the best of Google to our developer community,” said Matuk. “We expanded on the concept of the neighborhood, which was the linchpin in the 2017 creative.”

The main goal—and challenge—was to keep the event organized and manage the lines. Matuk and her team looked to Disney World and other well-trafficked amusement parks for inspiration.

“Wayfinding was the most obvious and apparent thing from the minute you walked on campus,” she said. “Everyone understood exactly where they were and where they were going at all points in time.”

“So it was an opt-in, where you basically were digitally raising your hand to get more information on a given topic,” explained Matuk. “We found a pretty high success rate in that and we'll be implementing that again in 2019 and beyond.”

The event grew from a content perspective as well. With the main goal of educating—and celebrating—Google’s developer community, organizers added a new series of “inspiration sessions.”

“Those are the sessions where folks can come in and learn hardcore coding skills and get information from our new platforms and services, like Firebase, and the latest updates to the Android operating system,” Matuk said.

The inspiration sessions also featured forums that were less technical, such as a discussion on how artificial intelligence will impact the health industry. In another session, Black Panther producer Hannah Beachler spoke about designing for inclusion, while a third featured computer scientist John Hennessy discussing the future of computing.

“Google's responsible for more than just what happens in a technical sense in the tech industry,” noted Matuk. “We believe that we can build tools and platforms that enable people to change other industries in the world.”

Here’s a look at some highlights from the massive three-day event. 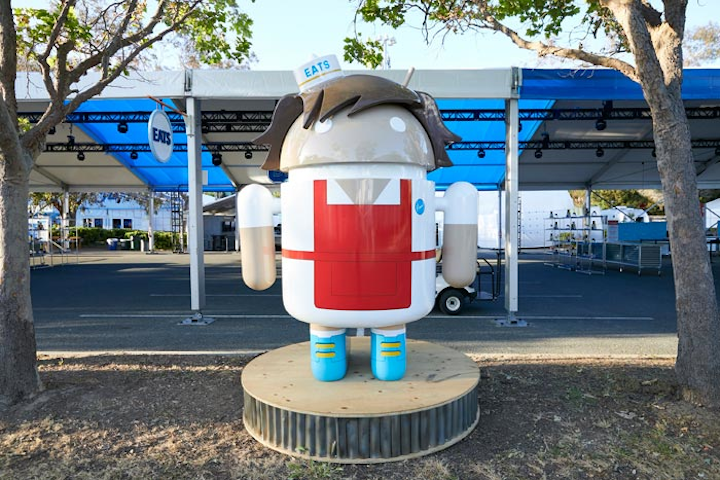 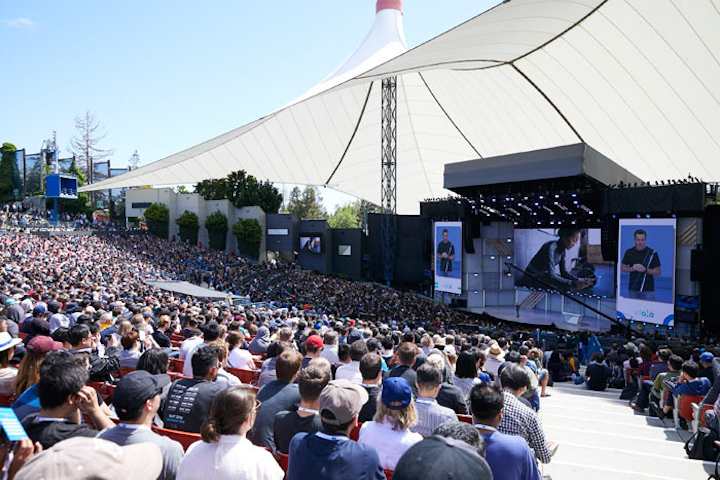 The 12th edition of Google I/O was held at the Shoreline Amphitheatre for the third consecutive year, drawing more than 9,000 attendees each day. Organizers expanded the event’s footprint this year, adding a ninth stage in a neighboring parking lot.
Photo: Courtesy of Google 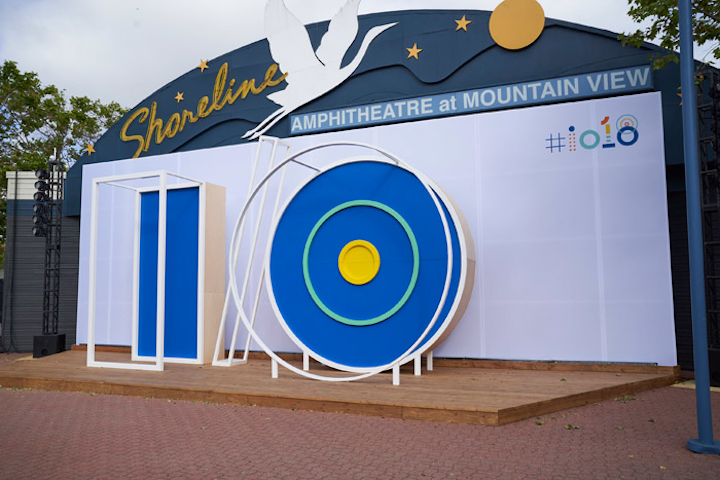 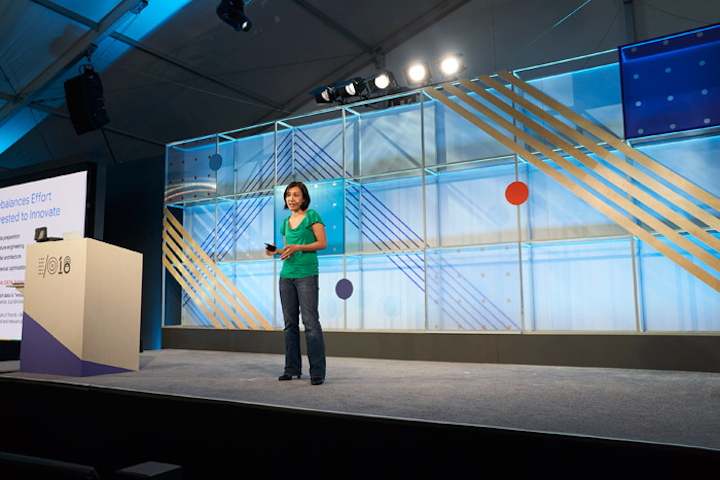 Stage backdrops complemented the year's logo design, with geometric, 3-D lines and circles. Google’s events and experiences team, as well as the developer marketing team, worked with Sparks on the event production.
Photo: Courtesy of Google 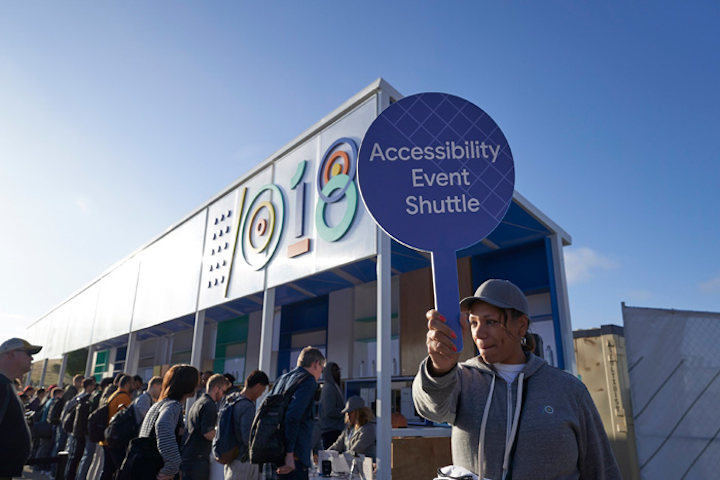 Organizers drew inspiration from wayfinding and line management tools at well-trafficked theme parks. “Wayfinding was the most obvious and apparent thing from the minute you walked on campus,” explained Google’s Amanda Matuk. “Everyone understood exactly where they were and where they were going at all points in time.”
Photo: Courtesy of Google 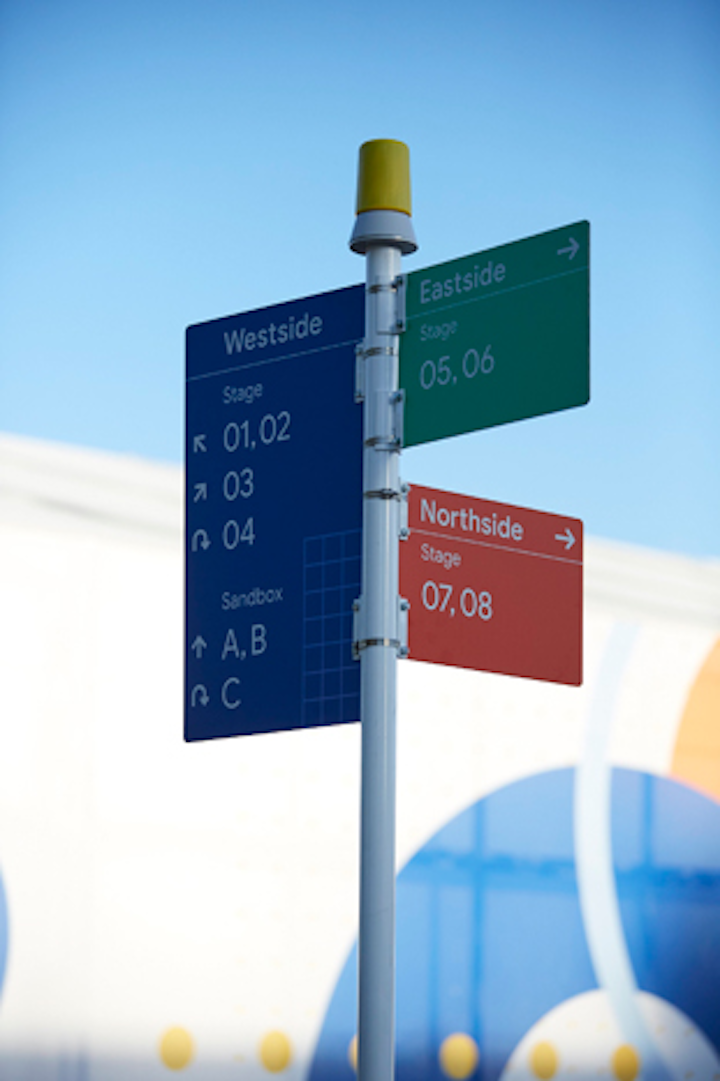 Colorful signage was displayed prominently throughout the campus. The conference continued last year’s method of a neighborhood-like design, with a single Main Street connecting all areas of the massive event.
Photo: Courtesy of Google 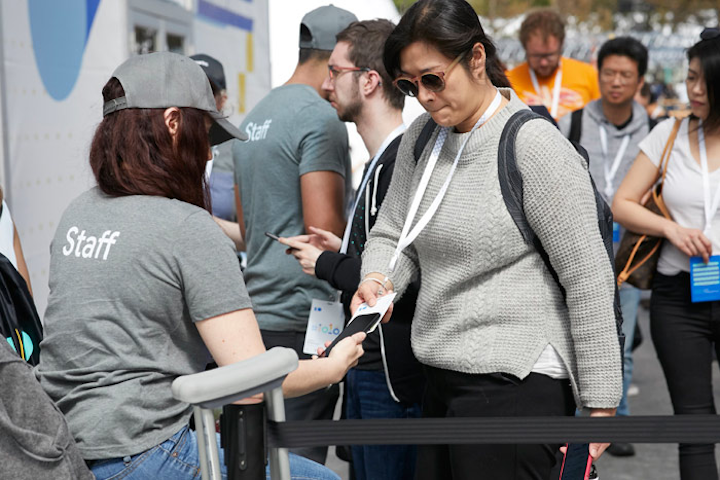 New this year was an increase in information-sharing: Attendees could scan their badges at any session to receive more details on the topic.
Photo: Courtesy of Google 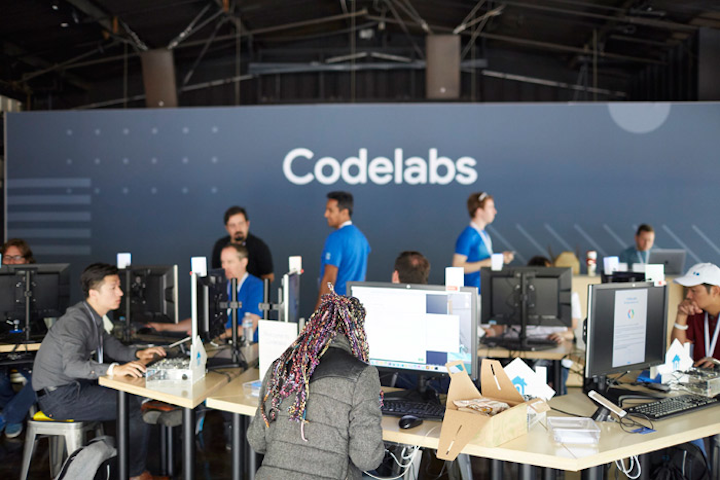 The on-site Codelabs allowed attendees to get hands-on coding experience at kiosks. The event also included Sandboxes, which were dedicated spaces to learn about and test Google’s latest products and platforms.
Photo: Courtesy of Google 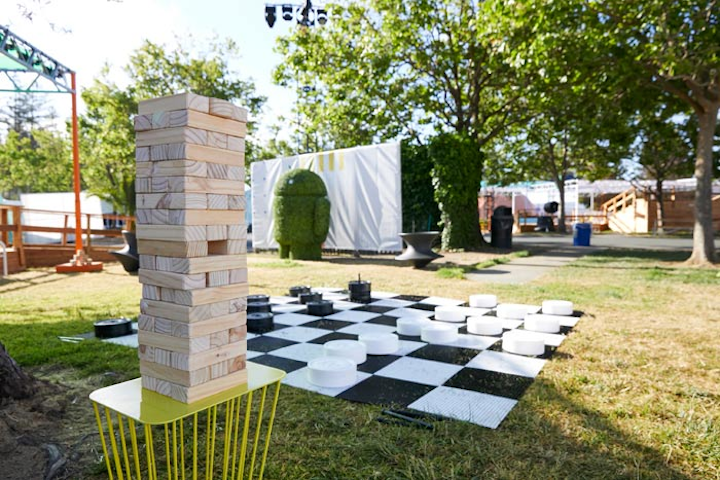 As in previous years, the conference incorporated music-festival-inspired elements, such as oversize Jenga and Checkers games.
Photo: Courtesy of Google 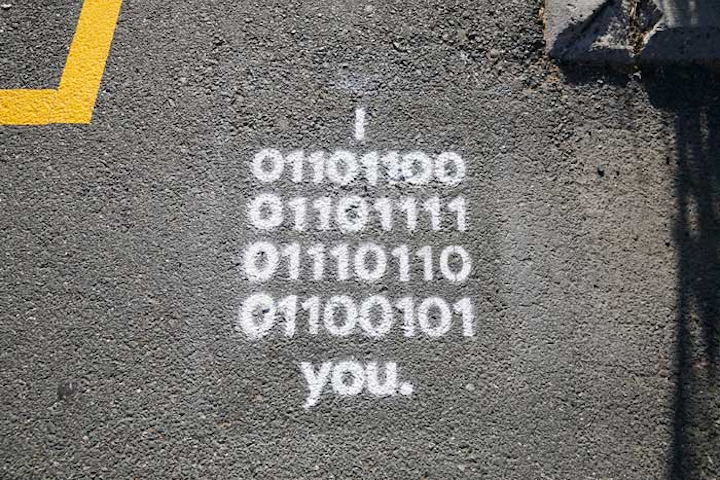 Tongue-in-cheek signage on the ground added a fun touch for the crowd of developers, including one that spelled out “I love you” in binary code.
Photo: Courtesy of Google 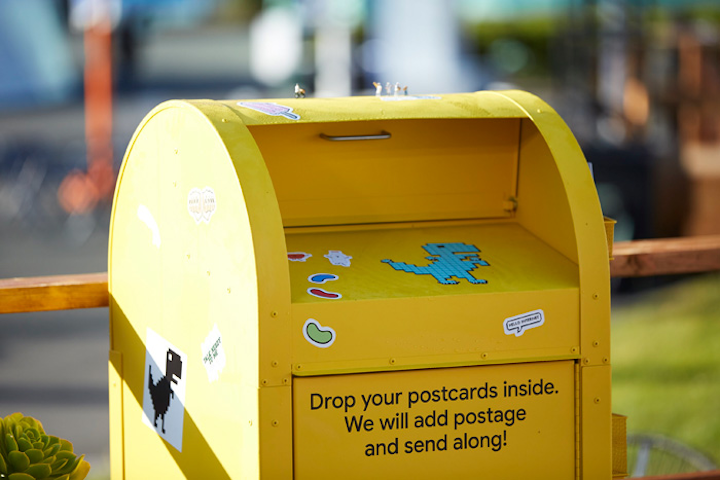 As in years past, organizers provided postcards and invited attendees to write a note to a colleague, friend, or family member and drop it into one of the mailboxes located around the event. The goal was to add an analog touch to a tech-heavy environment.
Photo: Courtesy of Google 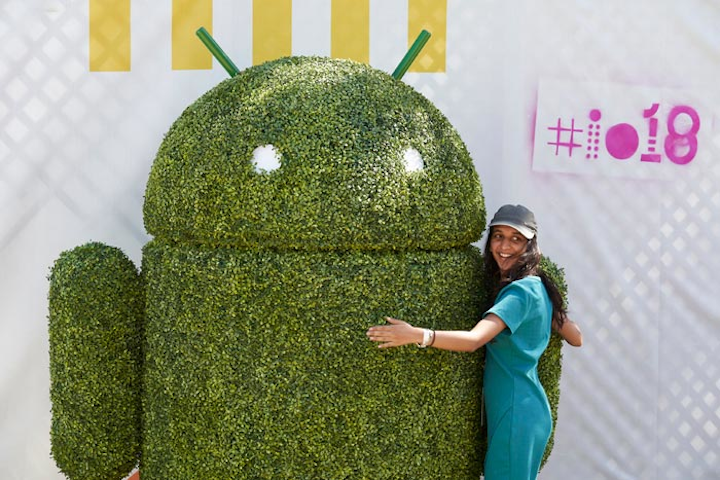 Another Budgroid photo op area featured a version made from greenery.
Photo: Courtesy of Google 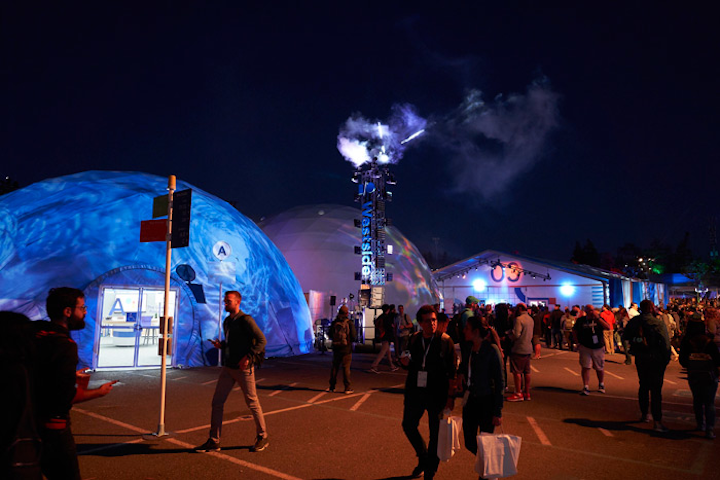 Large tents that held sessions during the day were illuminated for the nighttime events, which included an arcade, musical entertainment, magic shows, and more.
Photo: Courtesy of Google 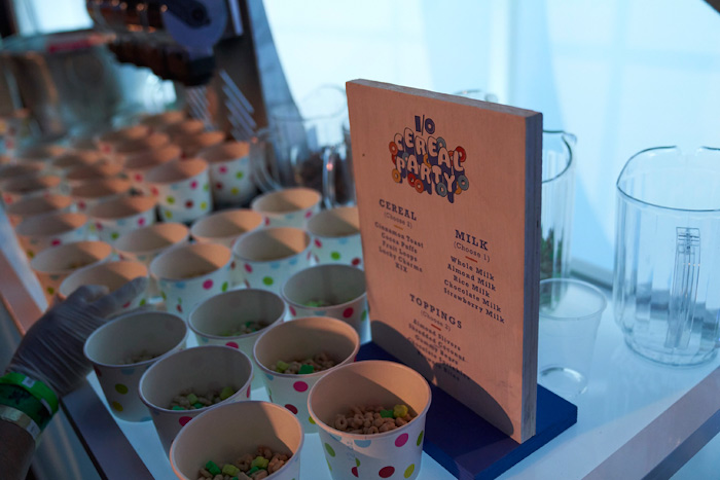 One evening event featured a cereal station as an out-of-the-box dessert.
Photo: Courtesy of Google 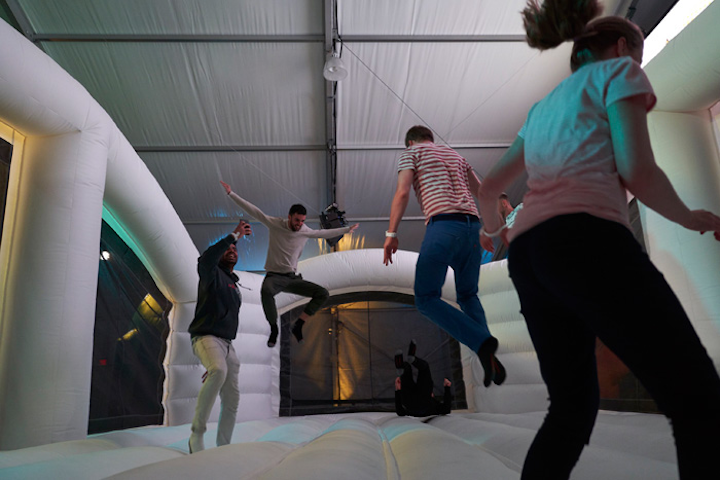 Attendees could also unwind after hours in a moon bounce.
Photo: Courtesy of Google
More in Event Management & Tech Tools