For its fifth annual Sounds Like You: Summer concert, Pandora moved to a new venue and created a campaign designed to appeal to local residents. The changes resulted in an attendance increase of 2,000 people.

Pandora has always been fan-focused, creating personalized playlists for music-lovers, connecting them with local artists, and producing some 100 free, invite-only shows for fans every year. Most recently, the music-streaming service thanked fans with Pandora Sounds Like You: Summer. The concert was Pandora’s largest single-day event in its history, drawing 6,000 people to the Los Angeles Memorial Coliseum on July 29.

Organizers made a few changes this year in order to welcome as many attendees as possible to the daylong event, which featured performances from headliner Big Sean, as well as Machine Gun Kelly, Noah Cyrus, and Starley. The free, invite-only concert drew 2,000 more attendees than last year, which Nicole Carbone-Rogers, Pandora’s senior director of events, attributes partly to the location change. The stadium offered a more central, accessible location with plenty of parking. (Last year’s concert was held on a city block in Downtown Los Angeles.)

Pandora also launched a “Sounds Like You” marketing campaign this spring, which celebrated the release of the new Pandora Premium service with digital shorts, social media activations, and curated playlists designed to appeal to local listeners. Artists such as L.A.-born rapper Big Sean hand-picked their favorite summer tunes to create the playlists.

“We have really defined our strategy and process around building these events and making sure that we are staying true to connecting fans—our listeners—with their favorite artists in their hometowns while providing a very unique experience and environment,” said Carbone-Rogers, who planned the concert with Pandora’s in-house experiential team. NVE Experience Agency also helped with production and fabrication.

“From start to finish, the experience was built to take our guests through the evolution of Pandora and the access they have to their favorite artists,” Carbone-Rogers continued. “[We wanted to] provide unforgettable, story-worthy engagements all day long.”

Pandora subscribers were able to R.S.V.P. in the weeks leading up to the concert. Once they arrived, guests walked through one of three tunnels to enter the stadium; each tunnel was customized with content from the Pandora Premium campaign, including artist imagery and new product and feature information.

The concert took over 130,000 square feet of the stadium’s field, which was designed to be an immersive environment surrounded by palm trees and guest experiences. A 13,000-square-foot sponsor village showcased activations from nine sponsors, including General Mills, Always, and Chevron.

In addition to the Los Angeles event, the Sounds Like You campaign traveled to New York on July 19; artists Nas, Young M.A., Dave East, and Biz Markie performed, and a curated playlist on Pandora’s website featured a selection of hip-hop hits made famous in New York. “Our goal is constant growth, continued awareness around our brand, and creating a connection with our guests,” said Carbone-Rogers.

Here’s a look at the colorful, summery production and sponsorship highlights from the massive Los Angeles event. 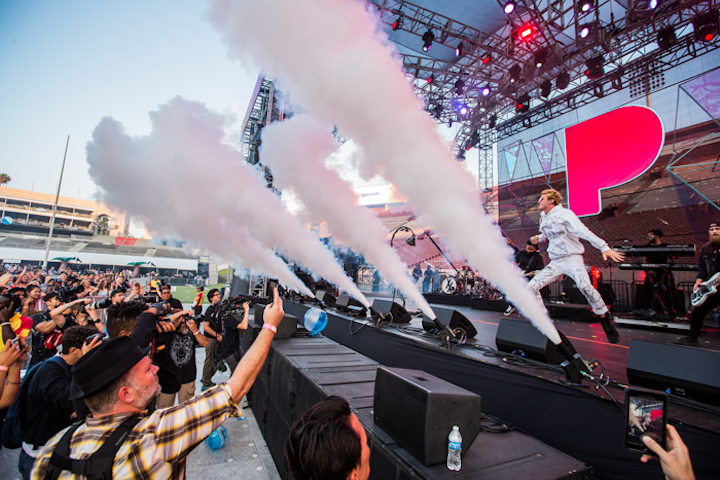 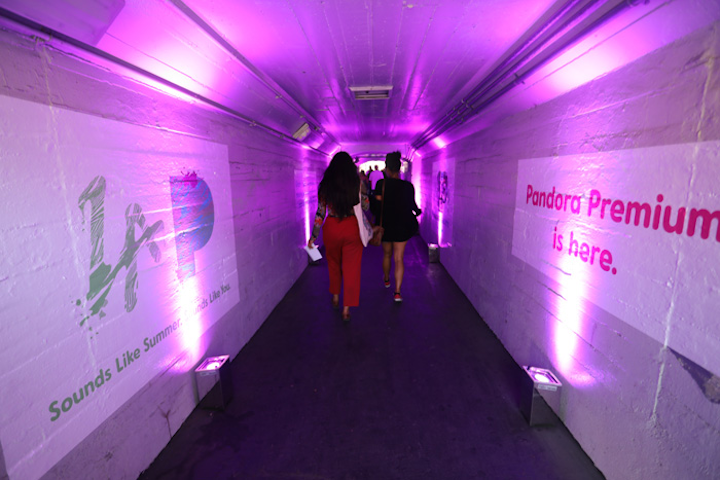 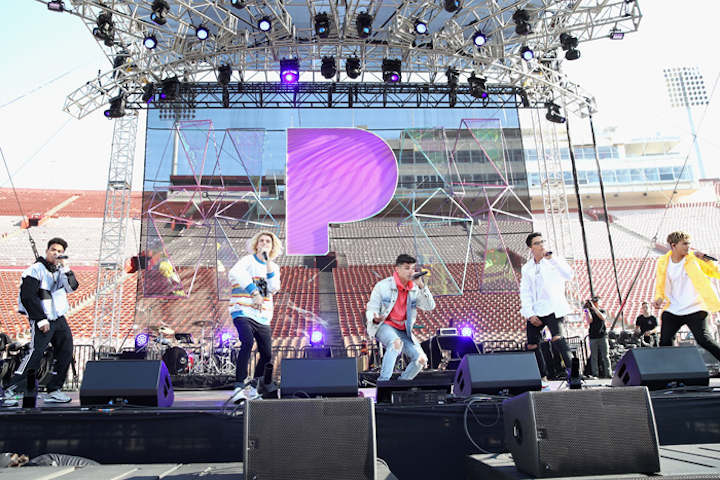 The main stage, located on the field’s south sideline, was built by hand to comply with the venue’s regulations. Built into the stage were more than 110 moving intelligent lights, and the backdrop featured a 12-foot-by-10-foot version of Pandora's “P” logo that was lined with blue neon. Six custom-built geometric set pieces completed the look, with over 70 square feet of mirror and 200 square feet of dichroic glass.
Photo: Jonathan Leibson/Getty Images for Pandora 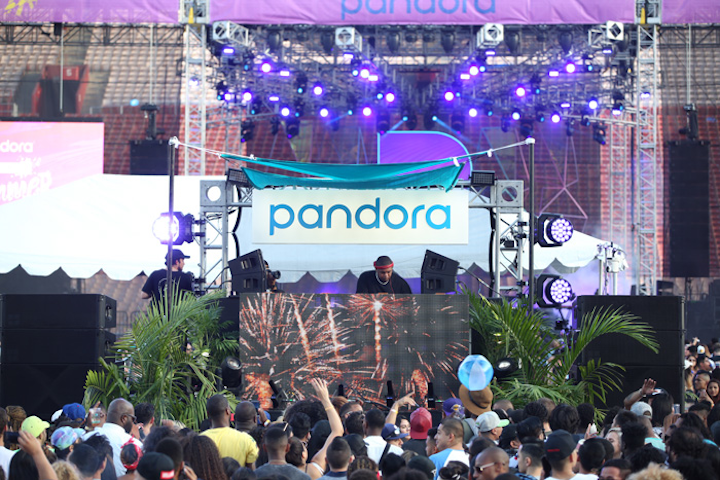 A DJ booth was situated about mid-way down the field to keep guests moving during the event. DJ Mustard and DJ Sourmilk performed during main-stage change-overs.
Photo: Jonathan Leibson/Getty Images for Pandora 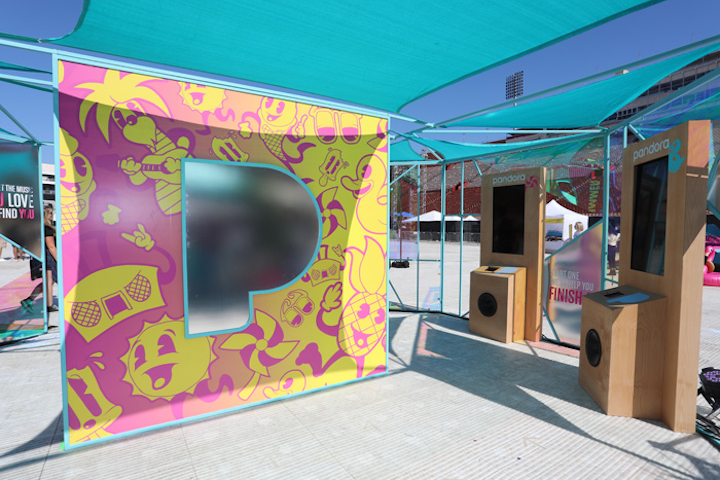 A custom-built geometric structure housed Pandora Premium kiosks, where guests could experience the newest features of the service and listen to a mixtape curated by the day’s performers. Brand ambassadors also handed out Pandora-branded swag, including trucker hats—which could be personalized at an airbrushing station—as well as branded pins and stickers.
Photo: Rachel Murray/Getty Images for Pandora 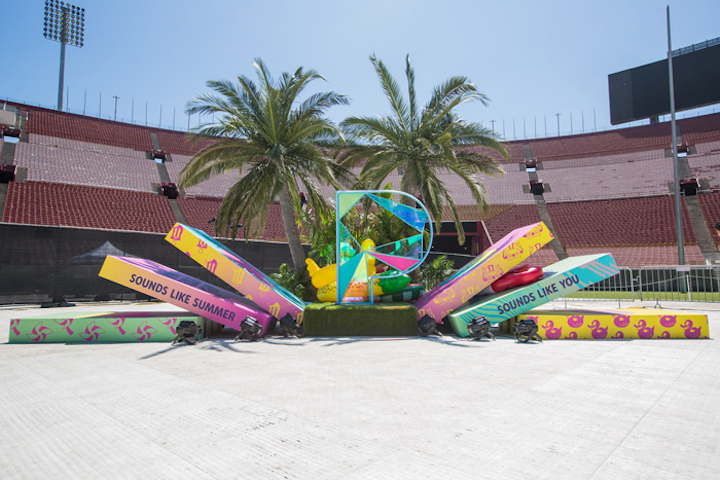 One of the most popular activations of the day was the Pandora Photo Moment—a giant, bright “P” built with dichroic glass and flanked by colorful dominos. Guests posed with summery emoji-type floats while brand ambassadors took photos.
Photo: Clayton Woodley for NVE 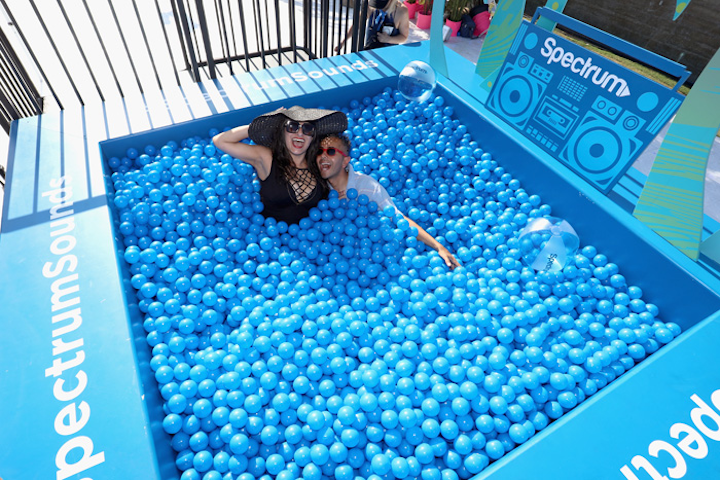 TV, Internet, and voice company Spectrum created a swimming-pool-like ball pit filled with more than 9,000 balls. The activation proved a popular photo backdrop throughout the day; guests were encouraged to post their photos with the hashtag #spectrumsounds.
Photo: Rachel Murray/Getty Images for Pandora 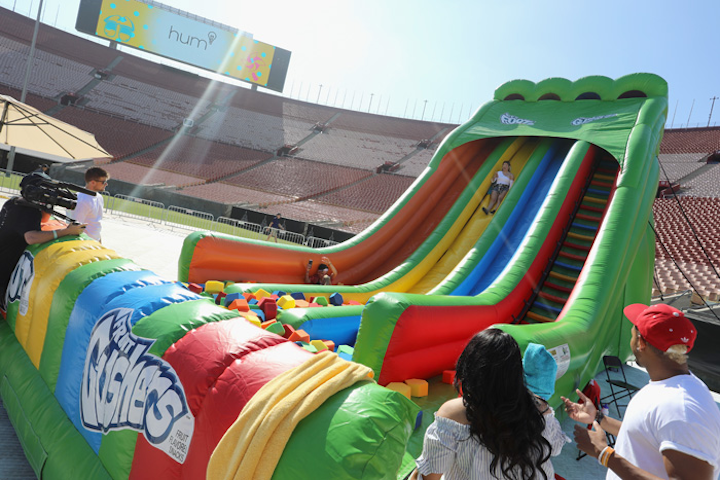 General Mills’ activation invited guests to slide down an inflatable slide—mimicking a roll of Fruit by the Foot—into a pit of foam that resembled Gushers fruit snacks. Participants were given a digital photo of their ride, along with candy, fidget spinners, and branded headphones.
Photo: Rachel Murray/Getty Images for Pandora 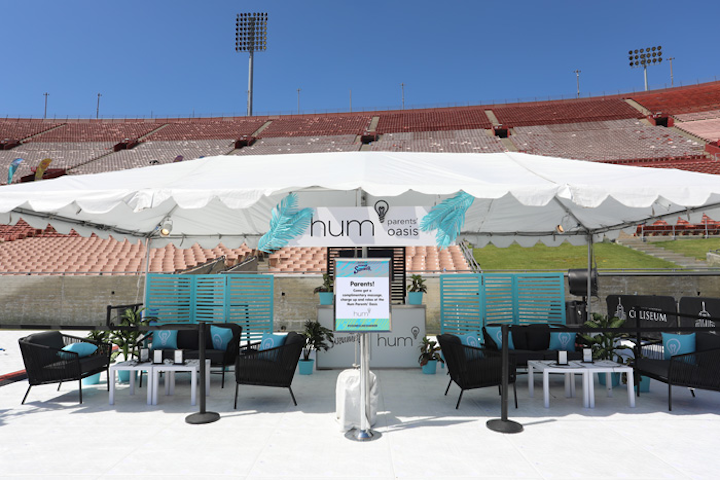 As a way to occupy parents who had driven their children to the concert, Hum—Verizon’s new smart car technology—created a “parents’ oasis.” The 30-foot lounge had two seating areas with charging stations, misting areas, flavored water, and massage therapists.
Photo: Rachel Murray/Getty Images for Pandora 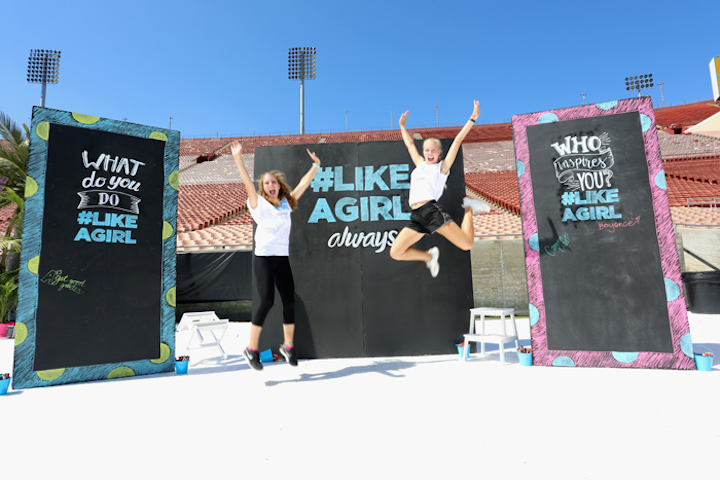 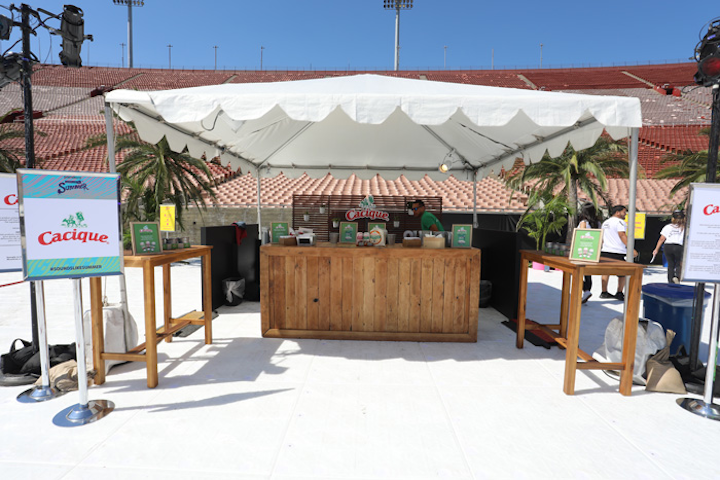 Cacique was a returning sponsor this year. The Mexican-style cheese brand showcased three new products, and handed out over 2,500 samples of chorizo and cheese tostaditas from a custom-built service counter.
Photo: Rachel Murray/Getty Images for Pandora 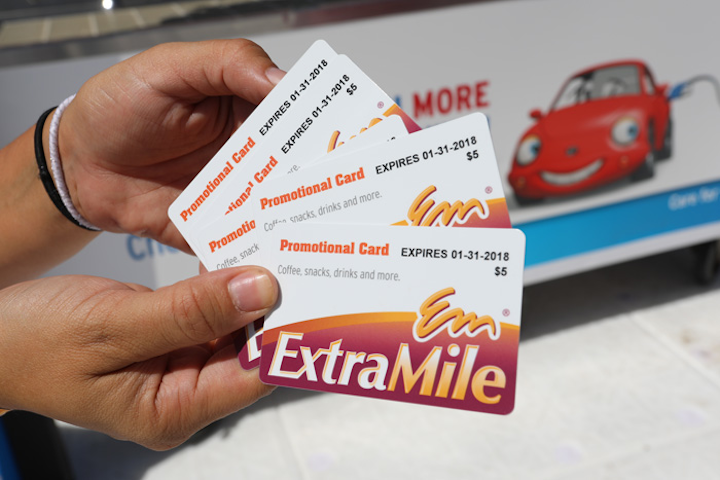 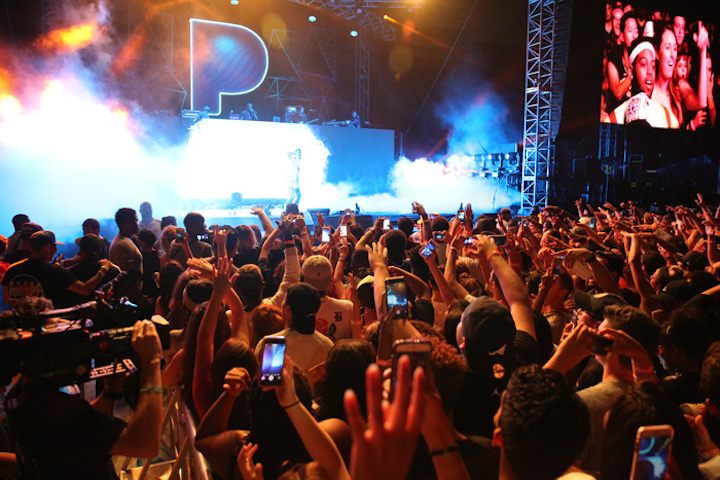 Two LED walls flanked the main stage and ran content from the show, additional artist content, and a live stream of user-generated social posts that pulled from Instagram, Twitter, and Facebook. The concert started in the mid-afternoon and ran until about 10 p.m.
Photo: Rachel Murray/Getty Images for Pandora
More in Event Production & Fabrication