Extreme stunts are a centerpiece of Red Bull’s event strategy—which spans genres from sports to music and beyond. 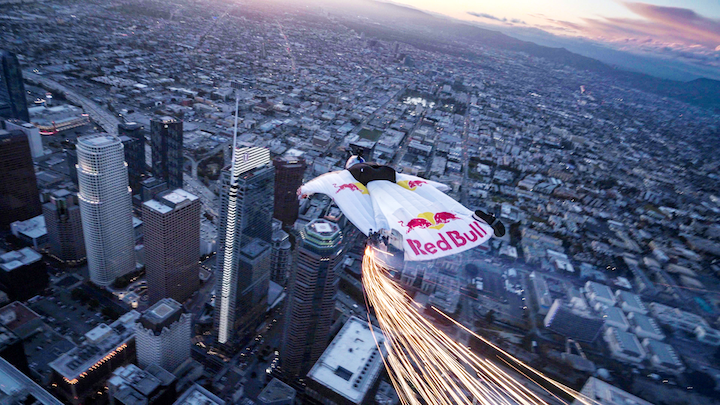 To celebrate the last supermoon of the decade and to ring in the vernal equinox, Red Bull teamed up with the InterContinental Los Angeles Downtown hotel for the first wingsuit jump into downtown L.A. Members of the Red Bull Air Force wore branded, LED-equipped wingsuits while jumping from a helicopter 4,000 feet in the air.
Photo: Andy Farrington/Red Bull Content Pool

Red Bull may be, at its core, an energy drink. But its brand messaging tells a powerful story about an unrelenting thirst for adventure and fearlessness in the face of risk-taking, and events play a major part in encouraging consumers to make those powerful associations when they glimpse those signature skinny cans.

The brand’s marketing strategy includes huge-scale events spanning lifestyle genres beyond just sports. And rather than contenting itself to serve as a mere sponsor of events, Red Bull itself produces an enormous range of proprietary and innovative programs around the world.

In particular, Red Bull stands out with events that take the format of buzzy stunts. Consider that in March, the brand created a huge social media stir—not to mention triggered some playful paranoia about alien life and UFOs—with a stunt timed to celebrate the last supermoon of the decade and to ring in the vernal equinox.

Red Bull teamed up with the InterContinental Los Angeles Downtown hotel—which became the tallest building on the West Coast when it opened in 2017 at a height of 1,100 feet—for the first wingsuit jump into downtown L.A. Members of the Red Bull Air Force (yes, the brand has its own team of aerial stunt people) jumped from a helicopter 4,000 feet above the city while wearing branded, flying squirrel-inspired suits. Fitted with LEDs and pyrotechnics, the suits created a dramatic spectacle in the sky as the jumpers soared past the hotel before landing on the street below. 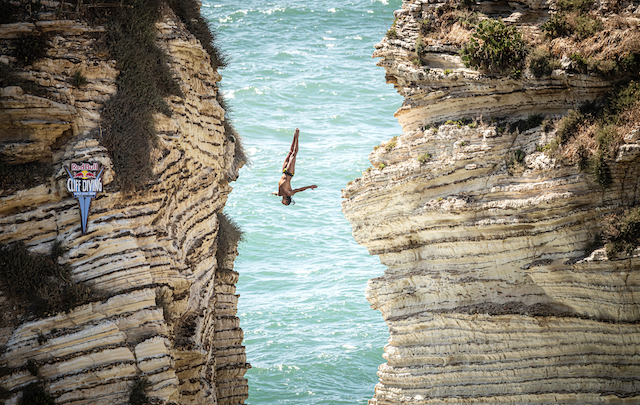 As part of the Red Bull Cliff Diving World Series, Nathan Jimerson of the U.S. dove from an 82-foot cliff in Raouche during the fifth stop in Beirut, Lebanon, in July.Photo: Romina Amato/Red Bull Content Pool

Red Bull pulled a similar, and similarly buzzy, aerial stunt of another sort elsewhere around the world this year. In April, the Red Bull Cliff Diving World Series kicked off its 11th season with competitors across seven international stops. The global event series all wrapped up on September 14 at Bilbao’s La Salve Bridge in Spain, next to the highly recognizable Guggenheim Museum Bilbao.

The diving event series started in France in 2009. This year, it introduced three new locations: Dublin, Beirut, and El Nido in Palawan Island in the Philippines. Former Olympic diver Greg Louganis serves as sports director for the series, which drew 170,000 spectators last year in person—and Red Bull makes broadcasts of the competitions available on redbullcliffdiving.com, Red Bull TV, Facebook, and YouTube for viewers online, as well.

Another massive global sports event for the brand is the freestyle football tournament Red Bull Street Style, with qualifiers held in more than 50 nations around the world during the year. It hosted its world finals in Miami on November 15, marking the first time that a Red Bull Street Style World Final has ever been held in North America.

In addition to its over-the-top presence in the sporting event space, Red Bull also commands a significant presence in the music realm. In September, Red Bull Music announced it would host two new U.S. music festivals this fall, both centered on hip-hop with a particular focus on the culture of the host cities. These include the brand’s first Red Bull Music Festival Atlanta, which featured acts such as Teyana Taylor, Denzel Curry, and Ari Lennox and was held November 1 through 15. As well, the brand has returned with its Red Bull Music Festival Chicago, with a lineup including Lupe Fiasco, Tierra Whack, Jamila Woods, and others; it's taking place November 17-30.

Although eye-catching stunts and large-scale events like these comprise the format that most differentiates Red Bull, the brand does plenty of smaller-scale, targeted events as well. For example, in conjunction with the Red Bull 3X Los Angeles basketball tournament in Venice Beach, the brand hosted a pop-up takeover of L.A.’s Hotel Erwin in September, rebranding it as the "Halfcourt Hotel.” It featured murals, photo galleries, and a gift shop from local artists. Two invite-only suites had basketball-theme decor and artwork.

Indeed, Red Bull’s mix of events across multiple lifestyle genres, of varying scales, contributes to its place on Forbes’ list among the World’s Most Valuable brands of 2019: It currently sits at No. 71 with a brand value of $9.9 billion. Forbes notes that the brand sold 6.8 billion cans, up 8 percent, across 171 countries in 2018. The company has sold a cumulative 75 billion cans since Red Bull was introduced in 1987—with the help of its extreme event-based strategy. 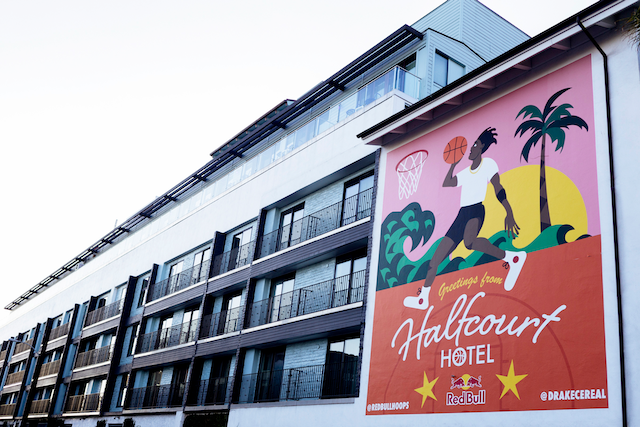