The electronics brand used a massive, arched presentation stage and an eight-part experience to announce new products during its annual event. 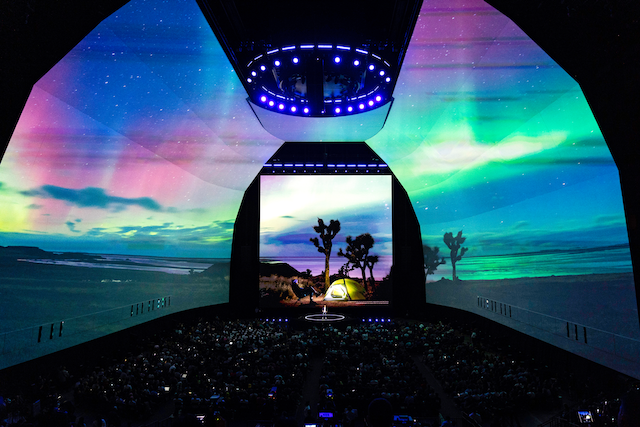 Branded content was projected on the two arches, as well as a separate LED screen that measured 19.2 by 19.2 meters and served as the stage backdrop. The content changed throughout the event to reflect the product unveilings and announcements, which included new partnerships with Microsoft and the United Nations.Photo: Courtesy of Samsung and Invnt

NEW YORK—Samsung’s Unpacked event has been known to use interactive and creative techniques to announce new products every year, be it a presentation with a live orchestra at Radio City Music Hall or a flash mob in Times Square. For the 10th anniversary of the New York event, the electronics brand enhanced the experience with a striking, cathedral-like stage for the keynote and a first-time, post-presentation experience that showcased new products such as the Galaxy Note 10.

Samsung and its in-house marketing agency, Cheil Worldwide, partnered with brand experience agency Invnt to produce the event, which returned to the Barclays Center in Brooklyn for a second consecutive year on August 7. The live-streamed event was attended by more than 2,800 media, influencers, and tech leaders, and has drawn more than 2.36 million streaming views.

Samsung didn’t offer comments about this year’s event, but Paul Blurton, chief creative officer of Invnt, which helped produce the event for a third consecutive year, said the brand “wanted to create a holistic, engaging, and warm experience from start to finish.” The theme of the event was “Journey of Light,” rendered in an overall design inspired by the “Aura Glow” color option of the new Galaxy Note 10 line of smartphones.

Along with the line of smartphones, Samsung also announced updated S Pen, Galaxy Watch Active2, and Galaxy Book S devices on a stage flanked by two massive arches, measuring 43.2 meters long by 25.6 meters tall, which extended to the back of the audience. The arches were connected to create a cathedral-like structure and projected branded content that reflected product unveiling and brand partnership announcements.

Mike Kitson, chief production officer at Invnt, said the brand tapped the company to design that style of stage in order to create a “more encompassing, engaging audience experience, one that evoked a warm and inviting atmosphere.”

After the presentation, guests could leave the arena venue to explore the brand’s first-ever Galaxy Experience Journey, a product showcase that featured eight interactive stations inspired by themes and stories from the presentation. Guests were able to test out new products at hands-on displays and installations designed for sharing on social media.

“[Samsung Unpacked] is continuously evolving, from the combination of technologies carefully selected to reveal Samsung’s latest devices to the way key content is displayed and the product experiences that are curated for guests,” Kitson said.

After Samsung administered a massive recall due to its exploding Note 7 phones in 2016, the brand has slowly worked to gain back consumer trust with experiential efforts. In the past year, Samsung hosted a pop-up dog park for the brand’s SmartThings Tracker, created a city-inspired booth at C.E.S., and partnered with PopSugar Play/Ground to host a space for wellness activities.

Here’s a look at the immersive highlights from Samsung’s 10th anniversary of Unpacked. 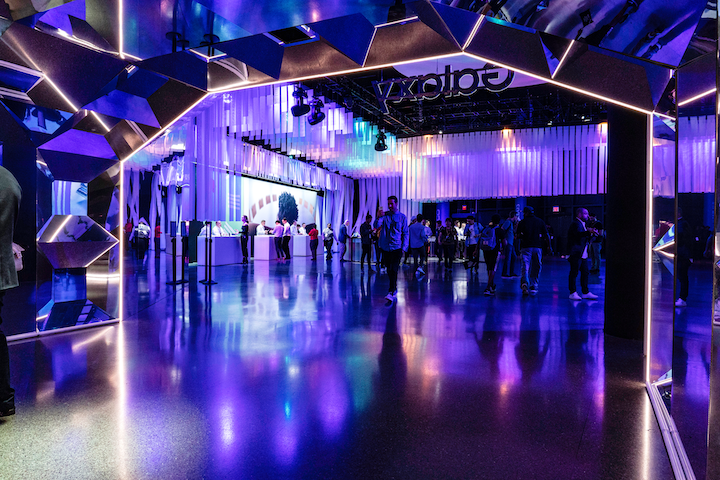 Invnt turned the atrium of the Barclays Center into a purple space, which included a ceiling installation of hundreds of flowing streamers. This space was connected to an entrance tunnel lined with faceted mirrors, taking inspiration from the design of Samsung’s new flagship stores.
Photo: Courtesy of Samsung and Invnt 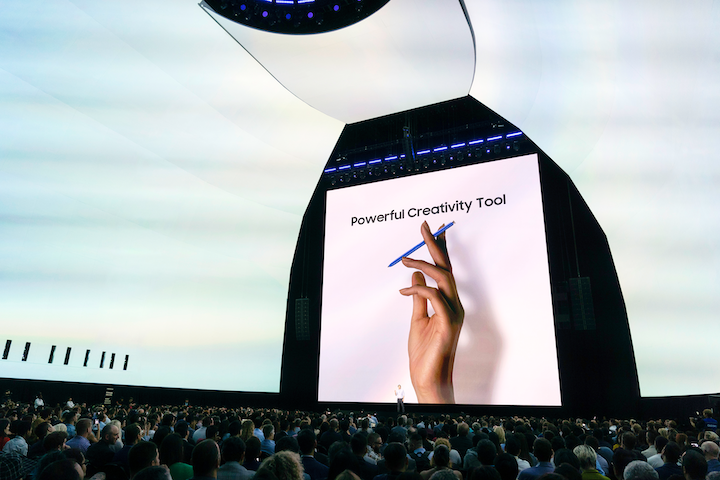 The main stage for the keynote presentation featured two arches that measured 43.2 by 25.6 meters, which connected to create a cathedral-like structure.
Photo: Courtesy of Samsung and Invnt 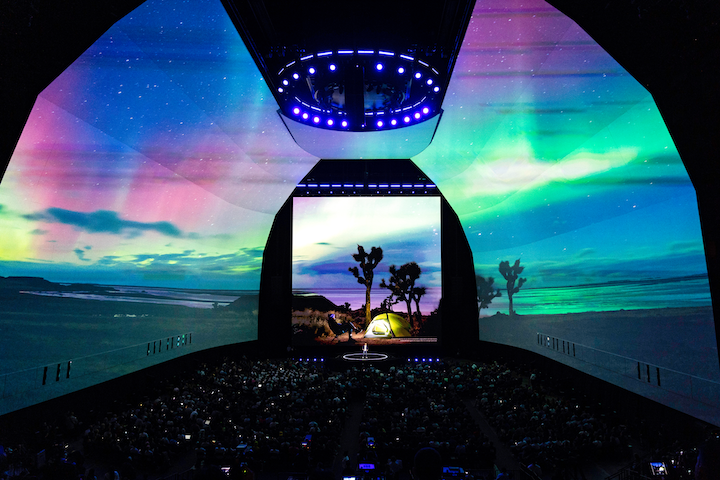 Branded content was projected on the two arches, as well as a separate LED screen that measured 19.2 by 19.2 meters and served as the stage backdrop. The content changed throughout the event to reflect the product unveilings and announcements, which included new partnerships with Microsoft and the United Nations.
Photo: Courtesy of Samsung and Invnt 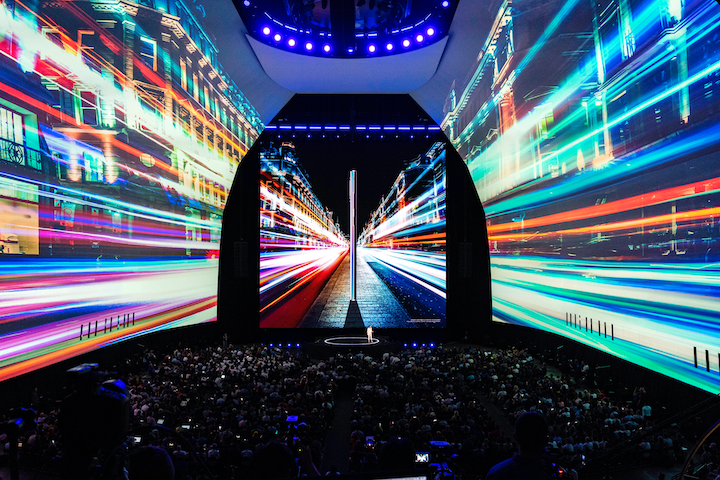 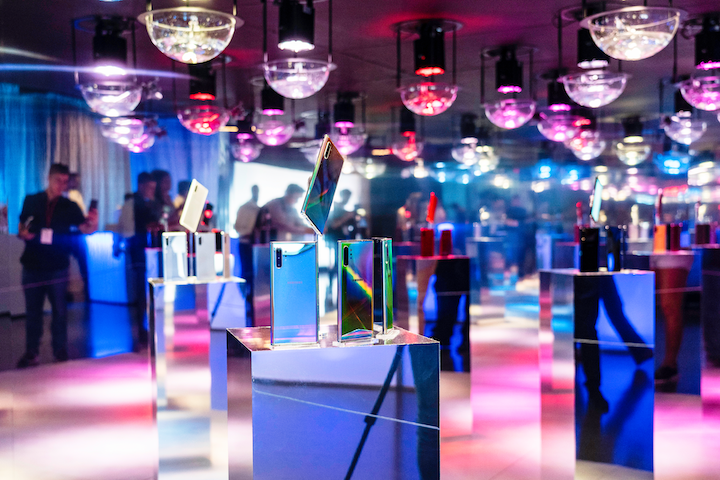 After the keynote, attendees could check out the Galaxy Experience Journey, which offered eight interactive stations incorporating presentation themes and products that were unveiled. The experience used more than 600 light fixtures, 200 ChainMaster hoists, and more than 4,000 feet of truss.
Photo: Courtesy of Samsung and Invnt 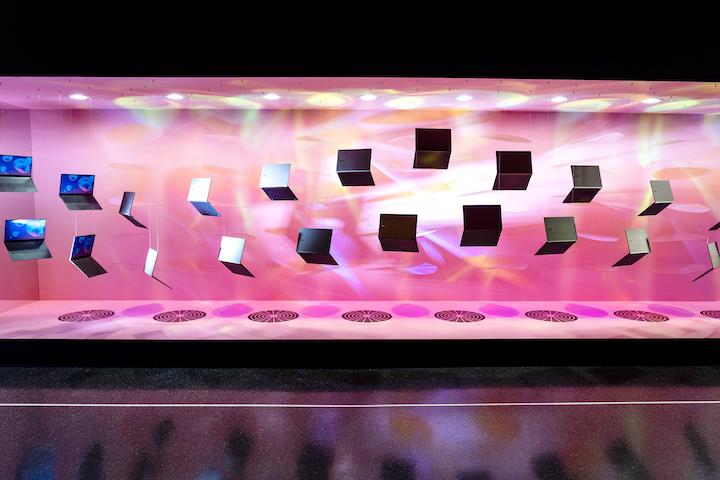 One station featured a display of laptops that were hung at varying heights.
Photo: Courtesy of Samsung and Invnt 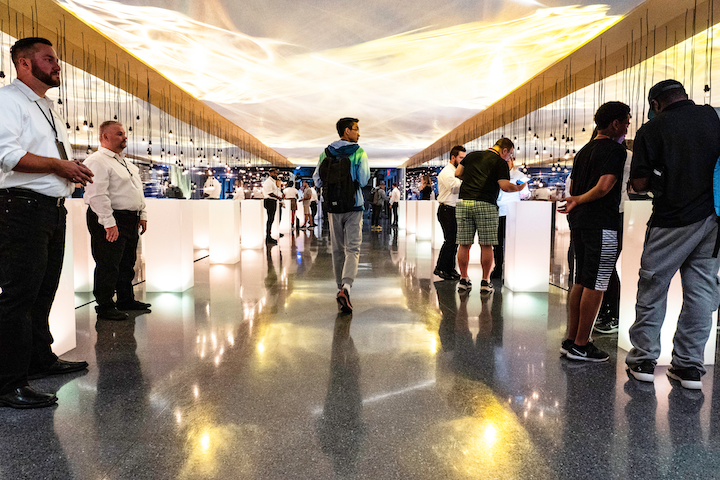 A room of product displays featured high-tech and low-tech audiovisual elements including ceiling projections and hanging lightbulbs.
Photo: Courtesy of Samsung and Invnt 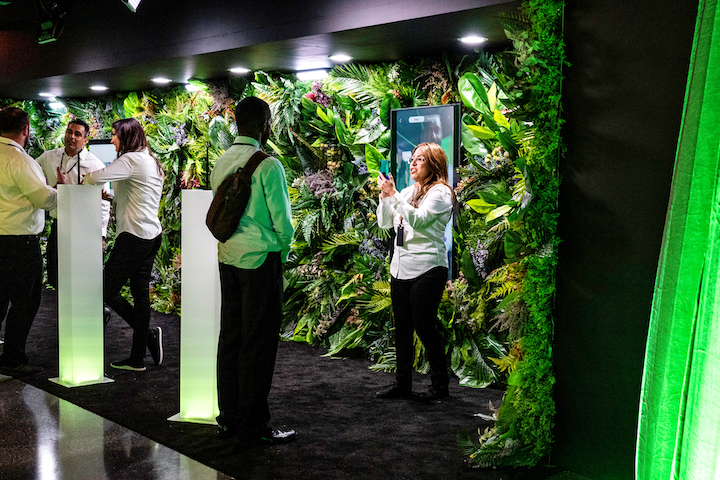 Guests could test out new Samsung products at installations including a selfie wall with a massive phone screen surrounded by lush greenery.
Photo: Courtesy of Samsung and Invnt
More in Event Production & Fabrication