Always a standout event marketer, HBO took its activations over the top this year in celebration of Game of Thrones’ final season. 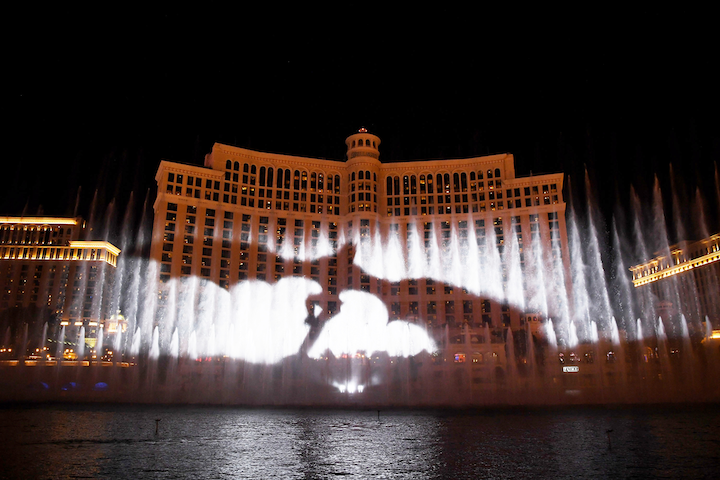 Ahead of the final season of Game of Thrones, HBO collaborated with MGM Resorts and Wet Design to produce a show featuring pyrotechnics, music, and video projections on the Fountains of Bellagio in Las Vegas.
Photo: Denise Truscello/Getty Images for MGM Resorts

HBO has long been a brand that prioritized large-scale and buzz-generating events as a significant part of its marketing strategy. But this year, given the enormous attention around the Game of Thrones farewell after eight seasons, the network took its approach to face-to-face engagement particularly over the top. Anchored by the months-long #ForTheThrone marketing campaign, the program included live events and executions spanning the entire globe.

“We’re all constantly bombarded with so many different advertising messages. When someone gets to immerse themselves into the world of a show in a meaningful way, we’re actually making an invaluable connection with a consumer—not only on a show level but on a brand level as well,” explains senior vice president of program marketing Sono Mitchell, who noted that HBO develops its strategies in house, then partners with external agencies to help build out and execute the production elements.

She continued, “And because that connection is first and foremost an emotional one, a human one, it’s also a lasting one.” 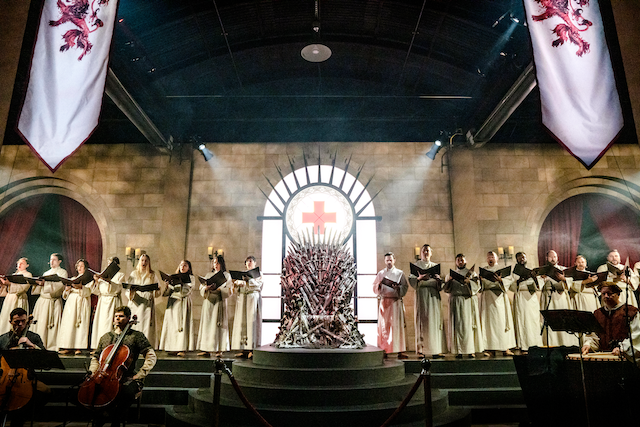 At South by Southwest in March, HBO partnered with Giant Spoon to recreate a castle and war campgrounds from Game of Thrones. The theme of the activation was blood, and the American Red Cross was on hand for donations.Photo: Courtesy of HBO

One of the most notable HBO events of the year was Bleed for the Throne: In partnership with the Red Cross, HBO created an immersive blood drive at South by Southwest that let fans make like their favorite characters and sacrifice their own blood. After donors gave blood, a live choir performed an original score to usher them into a war camp, where they interacted with more than 80 actors playing various GoT characters. Using Snapchat’s AR functionality, people could activate Easter eggs hidden throughout the experience.

More than 2,300 people attended the experience in Austin, and Bleed #ForTheThrone garnered an eye-popping 2.5-billion impressions worldwide. The event also served as a launch point to more than 3,000 blood drives across the country and internationally. “But, more importantly,” Mitchell explains, “our experience inspired a new generation of U.S. blood donors: The American Red Cross obtained 349,660 units of usable blood, and their first-time donor number grew by 21 percent—which aided in a 12 percent overall increase in U.S. blood donation.”

The #ForTheThrone campaign manifested in all manner of other events as well: Ahead of the world premiere screening of the final season, HBO installed a 35-foot, 20,000 pound Iron Throne at Rockefeller Center in New York. And in Las Vegas, HBO collaborated with MGM Resorts and Wet Design to produce a twice-nightly show on the Fountains of Bellagio, which featured dramatic pyrotechnics on the water and projections including the silhouette of a dragon.

And in a unique format twist, HBO executed the Quest for the Throne scavenger hunt, which sent fans on a worldwide scavenger hunt to find thrones in places reminiscent of those in its fictional Westeros. Locations included Babcock Seeps in Canada; Fort Totten Torpedo Battery in Queens, New York; Puzzle Wood in Devon, United Kingdom; and Castillo Atienza Guadalajara in Spain.

In all, the strategy of the campaign—and its success—centered on its varied and wide-ranging approach to events. “It doesn’t always have to be big, splashy, or global,” Mitchell notes, “if it’s smart, relevant, and authentic to the show.” 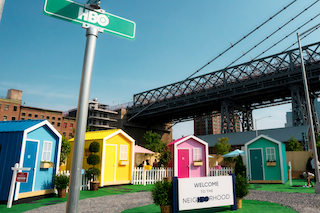 HBO revamped the second iteration of its Stay Home to the Movies event by creating a mini neighborhood that was open to the public.Photo: Courtesy of HBO

HBO executed plenty of memorable concepts outside of Game of Thrones this year, too—in fact, the brand’s attention to events far transcends merely its biggest, buzziest shows. “We’re always interested in creating unique, bespoke events where we can complement our overall marketing efforts,” Mitchell says. “We think it’s an incredibly important element because it really allows consumers to connect to our shows and our brand in a way that’s just not possible via a 30-second spot or a digital ad.”

For its second Stay Home to the Movies concept, which launched last year with a small New York gathering, HBO revamped the concept and expanded its reach for consumers—moving it to a Brooklyn park for a public event in July. The 7,250-square-foot pop-up neighborhood consisted of four tiny houses and a communal backyard area—and drew more than 5,000 people, compared to 150 last year.

Other recent shows garnered their own attention-grabbing pop-ups. For the documentary What’s My Name: Muhammad Ali, the network produced a weekend-long experience that celebrated aspects of the late boxer and activist’s life and career. And for Mrs. Fletcher, a new series about a woman experiencing a sexual reawakening, the network curated three days of classes with experts and panelists in New York. For Women's History Month, meanwhile, HBO transformed a vacant space in SoHo with diary entries in large-scale art installations, audio recordings, compilation books, and readings on film.

Outside New York, and pegged to the final season of Veep in March, HBO collaborated with Washington’s Hamilton Hotel to create the Selina Meyer Presidential Suite complete with a replica of the character’s Oval Office, with props like a throw pillow with Meyer's face on Mount Rushmore, a president portrait, and other clever decor.

“We had a great mix of innovative events this year, some larger in scope and some more targeted,” Mitchell says. “But regardless of scale, all were organic to the IP and drove connections with consumers, building goodwill and positive word of mouth.” 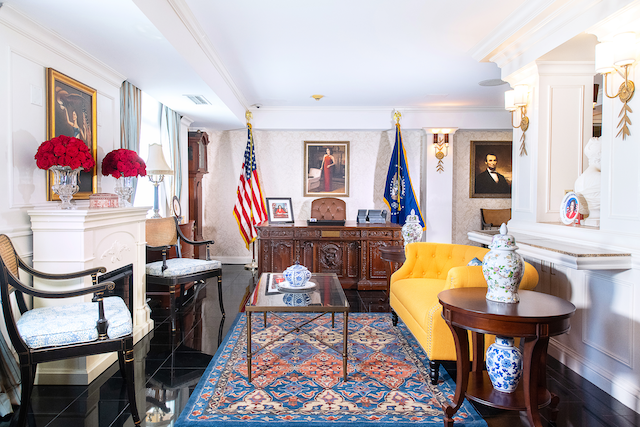 The Hamilton Hotel Washington, D.C. teamed up with HBO to celebrate the final season of Veep with a re-created Oval Office, complete with a presidential portrait of main character Selina Meyer and fun decor like a throw pillow with Meyer's face on Mount Rushmore.Photo: Courtesy of Hamilton Hotel